Ecotourism Is Saving Tanzania’s Animals and Threatening Its Indigenous People 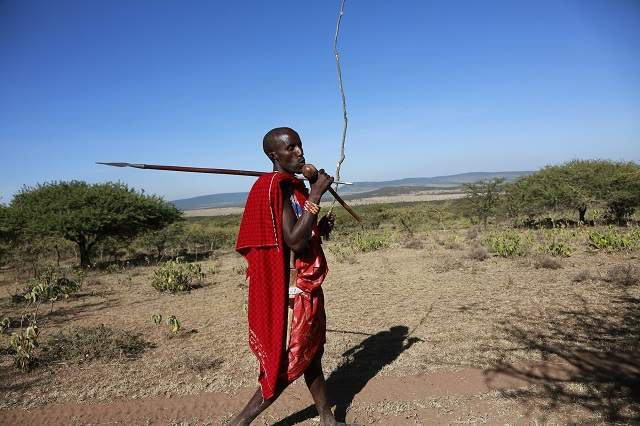 A Maasai man herds his cattle on the edge of Thomson property, defying the company's rules and intimidation practices. Guards are often dispatched to seize the cattle, and, according to witnesses, to beat herdsmen. But locals continue to risk violence because they say they have nowhere else to graze their cattle in the parched plains. (Photo: Noah Friedman-Rudovsky)

Worldwide, 8 million square miles—a landmass almost as large as the entire African continent—have been classified as protected areas by governments and conservation groups. In turn, the locals have mostly been pushed off their lands. Though no one formally counts people displaced for the sake of environmental preservation, data from the UN and the International Union for the Conservation of Nature on park footprints and population density estimate that the total number of removed people could be near 20 million.

Resaearched in the Loliondo district of Tanzania, Jean Friedman-Rudovsky's article looks at the current court case between the Masaii peoples and Thomson Safaris.

If the villages win, Wineland and Thomson said, they will appeal, but if that fails, they will respect the ruling and leave. If the villages lose the court case, neat closure is probably impossible. Several Loliondo residents told me that while they are proud to have brought the suit, they don't trust Tanzania's notorious judicial system, which is more corrupt than even the country's politicians. If the side with more power and money comes out on top, it's doubtful anyone could calm the Maasai. “We are no longer being hunted,” the local elder Lemgume said to me the day we met. “Now we are hunting. That's our ground, and we will get it back.”