Territories of Life launched in Mexico 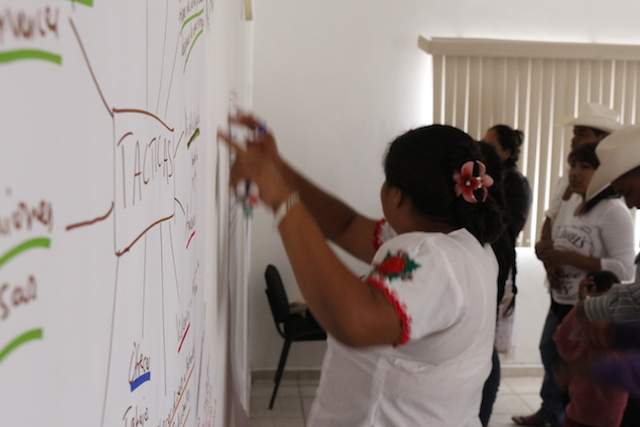 At the end of February LifeMosaic facilitated two workshops with Yaqui and Rarámuri communities in Sonora and Chihuahua, Mexico.  The workshops used the videos from Territories of Life to look into the question ‘How can the defence of territory be strengthened’.   We worked with the Marabunta Filmadora in Sonora and Siné-Comunarr in Chihuahua to organise and put on the workshops, our first in Mexico.

In both Sonora and Chihuahua indigenous communities are facing great pressures on their territories from outside interests ranging from the state, to extractive companies and the narco-industry.  Our aim through the workshops was to spark conversations around the meaning and benefits of territory, the threats faced and the actions that could be taken to strengthen community hold over territory.

The workshops went down well with the majority of participants; many interesting conversations were had; the videos had the intended impact of sparking discussion and ideas; and thoughts materialised around what to do next.  Here are some quotes from the participants about the workshops:

“What I liked about the workshops was that they were about a topic that affects us and worries us.  A space for dialogue between the different participants was prioritised and we looked at the issues from diverse angles.”  Participant, Sonora workshops

“I liked the videos that were shown because through them we realised that many people are fighting for their territorial rights all over the world.  This strengthens and brings us together as indigenous peoples.” Participant, Chihuahua workshops

These were our first facilitated workshops in Latin America using the Territories of Life toolkit – it was really great to see the videos in action and the many discussions and ideas they provoked.  There were also many useful learnings that will serve to improve future workshops.

This was just the beginning of our dissemination efforts in Latin America and we hope to organise many more similar events for communities across the region.