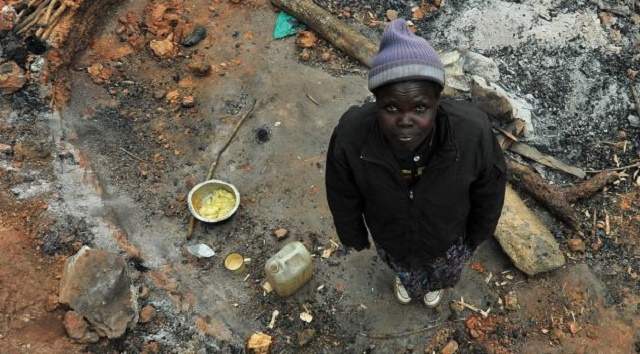 Gladys Chepkemoi was weeding potatoes in her garden the day the men came to burn down her house.

After her mother-in-law told her that rangers from the Kenya Forest Service were on their way, Chepkemoi strapped her 1-year-old son on her back and hurried to her thatched-roofed home. She grabbed two tins of corn, blankets, plates and cooking pans, and hid in a thicket.

She watched, she said, as the green-uniformed rangers set her house ablaze.

After they were gone, she came out of the thicket to see what was left.

“What used to be my home was now ashes,” she said.

The young mother is one of thousands of Kenyans who have been forced out of their homes since the launch of a World Bank-financed forest conservation program in western Kenya’s Cherangani Hills. Human rights advocates claim government authorities have used the project as a vehicle for pushing indigenous peoples out of their ancestral forests.

They are not alone.

In developing countries around the globe, forest dwellers, poor villagers and other vulnerable populations claim the World Bank—the planet’s oldest and most powerful development lender—has left a trail of misery.

Dams, power plants, conservation programs and other projects sponsored by the World Bank have pushed millions of people out of their homes or off their lands or threatened their livelihoods. In some cases, governments supported by World Bank money have arrested, beaten and even killed people who objected to being forced from their homes, according to interviews and official complaints.

They’ve been put at risk because the bank has repeatedly violated its own rules for protecting people who are in the path of development projects, an investigation by the International Consortium of Investigative Journalists, The Huffington Post, GroundTruth Project and other ICIJ media partners has found.

This story is the first in a series about what can happen to people on the ground when the World Bank bankrolls big projects. Other stories published today by HuffPost and ICIJ include an overview detailing the reporting team’s key findings, a look at mass evictions in Ethiopia tied to a World Bank project and a look at a Peruvian gold mine that is part-owned by the World Bank’s private-sector investment arm. ICIJ and its partners will publish more stories in the coming weeks based on reporting from India, Honduras, Kosovo and other countries.

The World Bank has admitted “shortcomings” in its protections for people displaced by projects the bank supports. It says it is working to improve its policies and how it enforces them. The bank also says protecting people in the way of big projects is a “cornerstone” of its efforts to “end extreme poverty and promote shared prosperity.”

Smoke rises from a homestead destroyed by fire in western Kenya’s Cherangani Hills. Members of the Sengwer, an indigenous group, claim Kenya Forest Service rangers have tried to drive them out of their ancestral forest by burning their homes. Photo: Tony Karumba / GroundTruth

In Kenya, the World Bank’s in-house Inspection Panel found, the bank violated its policies by failing to do enough to protect the Sengwer, an indigenous minority group in Kenya’s western forests that includes Chepkemoi and her family.

The report, released this past October, concluded the bank wasn’t directly to blame for the evictions targeted at the Sengwer, but said the bank might have helped prevent abuses against them if it had enforced its own rules  —including the requirement that its borrowers respect the land rights of indigenous peoples.

The World Bank began financing the Kenya Forest Service’s Natural Resources Management Project in 2007. It promised to cover $68.5 million of the project’s $78 million budget in an effort to help the KFS “improve the livelihoods of communities participating in the co-management of water and forests.”

The Forest Peoples Programme, a U.K.-based advocacy group, says the bank’s funding of the conservation project put the Sengwer in danger because the project redrew the Cherangani Hills’ protected Forest Reserve in a way that included thousands of them inside the reserve’s boundaries. This gave KFS officials a pretext for evicting them, according to the group.

Paul Kibet, secretary of the Sengwer Council of Elders, said that cash from the World Bank also provided the equipment the KFS needed to launch its mass eviction campaign.  “After receiving this money, they bought new vehicles. They bought the forest guards a lot of new guns and boots, et cetera,” he said.

Kenya’s government believes the Sengwer are illegally occupying public lands. Authorities have torched at least a thousand Sengwer homes since the World Bank began financing the conservation project, according to accounts by Sengwer and human rights researchers. They have also jailed dozens of Sengwer for farming without permits and trespassing on lands that their clans have occupied “since time immemorial,” a formal complaint from a group of Sengwer to the World Bank claimed.

The KFS says it has not carried out “forceful” evictions of the Sengwer and that “genuine persons deserving resettlement” have been “extensively profiled through a consultative and participatory process.”

Sengwer leaders said the land offered by the government was treeless and barren.

The evictions and burnings continued.

Paulina Sanyaga said that after the KFS torched her home in March 2011, she slept in the forest with her children. Her youngest was 5 years old at the time. “My child asked why we were sleeping outside, and I told him that the government had burnt not ours alone, but everybody else’s house too,” she recalled.

Because her fence was destroyed by KFS men, she said, many of her cattle and sheep were lost or stolen.

“It felt so painful to lose them,” she said. “They were my own sweat.”

John Chebaraa, a 60-year-old father of seven, said he slept in a caved-in tree trunk the night after his home was burned in mid-2011.

“It was very cold,” he said. “When I woke up the next morning my body was grayish and pale.”

After their house was torched in October 2011, Chepkemoi, her husband and her co-wife—the Sengwer are polygamous—built a makeshift shelter out of bamboo, cow hide and sheep skin. They slept in it for months instead of building a permanent house, she said, “because KFS were always patrolling nearby. If we built another house, they would have burned it down as well. So we waited until they stopped patrolling the area.”

The fire set by the KFS consumed their millet, five sacks of corn and four beehives, Chepkemoi’s husband, Brian Bett, said. The family only had potatoes and milk to eat.

“I did not have enough food for the family to eat, and we often had to sleep hungry so that my children could eat,” Bett said. “My children have faced a lot of difficulty and they cried a lot, because they are young and do not have the ability to explain what is ailing them.”

“I don’t understand why they chase us like this.”- Selly Rotich

In early 2014, advocates for the Sengwer reported that authorities had begun a new wave of evictions, writing to United Nations agencies that things on the ground were “chaotic,” with some people moving with their children and belongings “to nowhere in particular.”

The bank, noting that it was no longer funding the forest conservation project, said it was “not linked to these evictions.” World Bank officials argue the bank is not to blame for any of the evictions carried out by the KFS because the Kenyan government has been evicting the Sengwer for decades and continued doing so after the bank’s official role ended.

Tom Lomax, a human rights lawyer with the Forest Peoples Programme, said the World Bank deserves a measure of blame even for more recent evictions because it “did not do enough—or didn’t do anything loud enough—to address the evictions during the course of the project.” That emboldened Kenyan authorities to go forward with a removal campaign that grew increasingly aggressive during the World Bank’s sponsorship of the KFS, he said.

Tens of thousands of Sengwer still live in the Cherangani Hills. KFS rangers have maintained the campaign of evictions through 2014 and into 2015, according to Sengwer leaders.

“I don’t understand why they chase us like this,” Selly Rotich, a mother of five, said as she sat outside her scorched home.

The next day, nine KFS rangers confronted reporters as they entered the forest, demanding why they were talking to the Sengwer.

“These guys are squatters,” said one officer, who declined to identify himself. “They are not allowed to be in the forest. They are here illegally.”

Reporters asked the rangers if they were the ones who set fire to Sengwer homes the day before. Another ranger responded, “You are being lied to. You are being misled by the people. They claim that we are burning the houses—how do you know that they are not burning their own houses?”

At that, several of the KFS agents grinned.