The Forest on their Plates 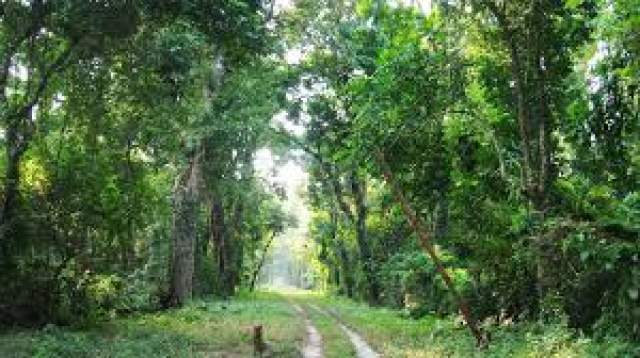 The sun flits in and out of the clouds, spotlighting the hills around Muniguda and Bissam Cuttack blocks in Rayagada district, Odisha. Their emerald green colour is so resplendent and bright that it almost hurts your eyes.

The sound of laughter and conversation bounces off the houses and trees at Khalpadar village nestled in the base of the hills. Music can be heard. A goat has been butchered for a community meal. I have arrived in the middle of some festivities.

The forests that surround these villages have for years been a vital support system for tribal communities across Rayagada, providing food, medicine, fodder, fuel wood and water. Generations had grown rain-fed millet and vegetables here, until the government set its sights on the land. Large chunks of forest were chopped down by the forest department to make way for cash plantations like teak, eucalyptus and timber.

That is whenthe women in these villages decided to take on the responsibility of protecting their forests. Today, thanks to their efforts, the hills are flourishing again with indigenous trees, plants and flowers. This, in turn, has brought back diversity to their plates.

“When they came to persuade us to plant eucalyptus and teak, we refused. They said ‘paisa zyada milega’ (you will get more money),” says Timoli Kurunjelika. “But we had seen that these trees suck the life out of surrounding areas. No roots can grow; no tubers, mushrooms or fruits. The soil gets damaged too. But the forest department insisted and planted their own trees. Three years later, all the native plants in the undergrowth and the trees were destroyed.”

This is when the diet of the tribal people in these villages began to suffer. The children did not get enough nutrition. The women decided that, despite the offer of money, instead of enabling the destructive development of their forests and hills, which they call Bamni Boirohoru , they would pave the way for a more sustainable future. They began to see that the new forest policy had led to malnutrition in their communities and they got down to get back what they had lost.

The first thing they had to do was reclaim their millet-growing fields. “We decided to cut down plantation trees and replant our traditional crops — dates, mangoes, moa , jackfruit, tamarind, jaamkoli, ” says Balo Shikoka. “The forest officials informed the police, who said we have to go to prison for this. We said we will go. All of us — women, children, elders — will stay in jail. We will go to prison for the jungle. But when we stay there, we won’t eat your city food. Give us our mandua (finger millets). The forest guys quietly left. There was no sign of them till last month. They came again. We told them ‘You know what we think. They left again’.”

It’s the womenwho are leading the change, going around telling other villagers to replant their forests. Last year, in nearby Nanduwadi, the forest department planted eucalyptus nurseries. The villagers went to the officials to reason with them. When repeated requests failed, the villagers cut the eucalyptus trees and set them on fire. “One afternoon, the police came in two vans,” recounts Sukhomoti Shikoka. “Most of us were in the forest or in the fields. Two women in the village ran and informed us. We all went running with laathis — women, men, elders, and youth. The police left. The entire village had protested. Finally, the forest department agreed to plant saplings of indigenous trees.”

It requires a lot of work to bring back diversity. The trees take at least five years to grow. The soil, damaged by plantations, takes time to replenish and thrive again.

The Adivasi women have formed informal groups to monitor the jungles and informal rules for gathering forest produce. “This year — from June to July alone — we have regrown jungles in 35 villages in Muniguda block,” says Sukhomoti. “About 6,000 families from Muniguda to Bissam Cuttack are involved — each planting 10 to 15 trees. Now the nutrition needs of our children will be met, even after the rains.”

Living Farms, a non-government organisation working in the region on food and nutrition security, conducts assessments of dietary diversity every six months. In 2014, the number of families with low nutrition levels was 58 per cent. Now it is 18 per cent. “A major area of focus is to link agriculture, natural resource management, and nutrition,” says Bichitra Biswal of Living Farms. “In the last couple of years, we’ve come to realise that government schemes like ICDS cannot ensure nutrition security. Chhatua, midday meals, eggs — these are supplements. In Rayagada area, we have traditionally had immense food diversity — many varieties of pulses, millets, grains, fruits, vegetables, greens and mushrooms. We need to protect this, not destroy it.”

A typical diet for an adivasi family starts with millet porridge. Lunch is another variety of millet, with wild onions, greens like gondri saag, foraged from the jungle, sometimes mushrooms, meats or fish. In the evening, they have rice, vegetables, pulses and cowpeas. The women talk about a time not so long ago when their diets were richly varied. Kosla, gurji, jari, sua , fruits, birds, animals, insects. They would eat the seeds of mango and tamarind, and roasted, ground roots.

They also depend on the forest for healing. One woman hurries off and comes back with a bunch of leaves and roots. She lists out their medicinal benefits. One stems bleeding, these roots control diarrhoea, this one is for toothache…

“My daughter knowswhat to do for toothaches,” says Landi Shikoka. “She has treated many people in the village. Her jejema (grandmother) taught her. The knowledge is passed from one generation to another. And the people are chosen. Jejema did not tell me, she chose my daughter, who has always had a knack for identifying plants and spends a lot of time in the jungles and hills. Once a man came from outside asking for treatment. ‘Are you sure it will heal me’, he asked. I said, ‘daat na theek kortey parley, pahaar niye niyo (if your tooth doesn’t get better, you can take our hill).” All this slowly vanished when the city people came. “They’d say ‘ Yeh cheez ghatiya hai’ . They thought we were moorkh (stupid). Someone in a pant-shirt would ask what we eat and be disgusted when we told him.” This hurt their sense of identity and pride. Then, when their children travelled to towns for education, they were exposed to another kind of food. “They started asking for soya nuggets and Maggi.”

“We noticed that the adivasis had developed an inferiority complex about their diet,” says Biswal. In order to combat the growing alienation from traditional food systems, Living Farms began organising a series of local food festivals in the villages to showcase the richness on their plates. Indigenous seeds and recipes were shared. Children and youth saw the diversity of their food. This has brought back pride in traditional food systems and the community has realised how the forest is a major source of their food. “Adivasis know about the jungle,” says Landi Shikoka. “When adivasis disappear, so will the knowledge, and the forests and the hills.”

Anuradha Sengupta is a freelance journalist who focusses on issues affecting women, youth, environment and