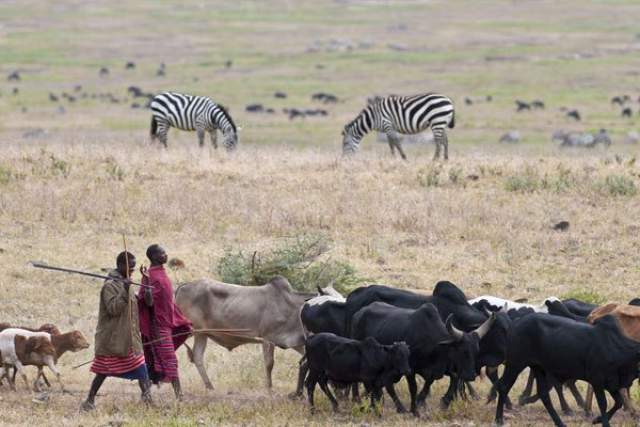 Tanzanian herders in the Ngorongoro Crater in Arusha. The country has withdrawn a hunting concession for the Dubai royal family. FILE PHOTO | AFP

Tanzania has terminated a 25-year-old hunting concession with a United Arab Emirates royal family-owned company as it launches investigations into the dealings of the company and former tourism ministers.

Newly appointed Natural Resources Minister Hamisi Kigwangalla has ordered the Prevention and Combating of Corruption Bureau (PCCB) to arrest and investigate Isaac Mollel, executive director of the Ortelo Business Corporation (OBC), which is a game-hunting outfit owned by a Dubai leader, for trying to bribe him and his predecessors. Dr Kigwangalla also called for the investigation of former ministers.

The termination of the concession marks the end of the controversial agreement. Activists, MPs and Maasai people who live in the Loliondo area in northern Tanzania have been involved in the battle against the takeover of the 4,000-square-kilometre block.

Dr Kigwangalla said the company will never be awarded another hunting licence, and suspended director of wildlife Alexander Songorwa for allegedly creating a syndicate of government officials in the ministry who have been compromised.

The land at the centre of the controversy is five hours’ drive north of Arusha in the Ngorongoro Crater and close to the Serengeti National Park.

Dr Kigwangalla said that the corruption allegations against OBC have existed for many years and it was now time for the ministry to take action.

Until early 2014, donations to ministries and government parastatals were only allowed if there was proof that they wouldn’t impair their independence. The circular was however amended so that donations would be made to the government coffers rather than a specific ministry or project.

According to the records, in 1994, CCM received $32,000 in donations and the Ministry of Natural Resources and Tourism received more than $2 million.

Chief opposition parliamentary whip Tundu Lissu, who has monitored the issue for over 20 years, says the donations may be the reason why the government and the ruling party kept the contract under wraps.

More than 2,796 animals and birds were killed in the 2007 and 2009 hunting seasons lasting four months each, with fears among the local people and conservationists that the animals could include endangered species.

The family may have killed many thousands of animals and birds in the 20-year period that the company has been operating in the area.

Tanzania granted the concession to the Dubai leader for wildlife conservation and management in the Loliondo Game Controlled Area in November 1992, but the local Maasai people have since been complaining that they were never involved in the process despite living in the area.

Under the agreement, local pastoralists were allowed to graze within the concession area. However, elders from six villages of the Loliondo Game Controlled Area say they are not allowed into the block awarded to the royal family and have to leave the area whenever the royal family arrives for hunting expeditions.

They further claim that OBC denies them access to water and grazing land on the grounds that people from the eight surrounding villages are trespassing on the concession area.

The Maasai elders say they have co-existed with wildlife for generations during which the environment has never been damaged.

Meanwhile, Tanzania has cancelled licences and suspended allocation of new blocks for hunting that were due next year, prompting protests from lobby groups that support the activity.

Hunters had already booked safaris for 2018, and the change could undermine revenues from the sector.

Tahoa and TPHA secretary general Michael Angelides told The EastAfrican that the move would affect professional hunting, whose proceeds support the war against poaching.

Professional hunting in Tanzania is regulated by the Wildlife Act 2009  and the Tourist Hunting Regulations of 2015.

“Revocation or suspension of a hunting licence should be carried out in accordance with the Wildlife Act 2009 unless changes are made by parliament,” Mr Angelides said.

The hunting sector contributes 90 per cent of the money used by the Tanzania Wildlife Authority.

Last week, Dr Kigwangalla announced fresh allocation of wild game hunting blocks in game reserves across Tanzania. He also cancelled new hunting licences that were to be released in January 2018.

He said that the government had given wildlife conservation experts 60 days to review and advise on the best way for allocation of hunting blocks.