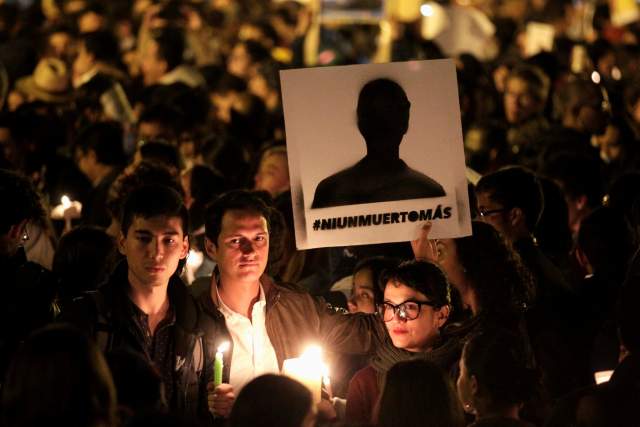 A sign reading “Not one more death” during a protest in Bogotá, Colombia, in July against the killing of social activists. (Luisa Gonzalez/Reuters)

WASHINGTON — The world is turning its eyes toward Colombia as the new president, Iván Duque, takes office. Rights groups and peace activists are calling on the government to ensure that both the peace process and the country’s social leaders are protected.

After more than five decades of civil war, my country is experiencing what could be one of the bloodiest peace processes in modern history. More than 330 people — including leaders of indigenous, Afro-descendant and peasant communities — have been murdered since the beginning of 2016, the year that the peace agreement was signed, according to the Colombian Ombudsman’s Office. At least 125 were killed in the first half of this year alone.

In early May, Hugo Albeiro George Pérez and Luis Alberto Torres, who opposed the construction of the Hidroituanga mega-dam on their lands, were murdered as an obstructed tunnel nearly caused the half-built structure to collapse and flood the valley below.

On July 7, I joined thousands who gathered at vigils around the world to call for an end to this political violence. The next day, two more protest leaders were assassinated. And more than a dozen were shot afterward.

But neither leader has called this for what it is: the systematic killings of political activists. Without an accurate diagnosis of the problem, we will remain paralyzed in bloodshed. Mr. Duque has to make peace — and safety for all Colombians — a priority for his government.

Like many Colombians, I have lived most of my life amid cycles of armed conflict and attempts at peace. I grew up listening to stories of violence from my family and witnessing the myriad ways it devastated groups across the country. Those who are poorest and living in rural areas have always been among the most affected by the violence.

In November 2016, I celebrated the peace deal between the Colombian government and the largest rebel group, the Revolutionary Armed Forces of Colombia, or FARC. I was excited to join my voice with those saying yes to peace. And for the first time in many years, I hoped that change was possible.

One of the most inspiring parts of the peace process was to witness populations long silenced by decades of violence finally able to exercise their rights as citizens. But now, these very leaders who have been constructing peace from their territories are being targeted.

Maps that document these murders show a clear overlap with regions hardest hit by the armed conflict, many of which contain lands collectively held by local communities. Colombia’s National Indigenous Organization has documented at least 68 homicides of indigenous community members, and 5,730 people have been forced to flee their homes.

In many areas, the exodus of FARC rebels has created a vacuum of power and a scramble for territory. Rural communities are finding themselves caught in the middle in an ever-escalating fight over illicit crops, illegal mining and drug routes. Of the leaders killed in 2018, five out of every sixrelate to the same core issues that have always fueled the war: access to land and resources.

Land ownership in Colombia is exceptionally unequal, among the worst in the world. When land was desired by wealthy interests for economic development, groups that had lived on these lands for generations were pushed aside — often violently. These conflicts became a major driver of the initial rebel uprising in the 1960s. As the war continued, rural residents were forced from their lands in conflicts between local governments, paramilitary groups, wealthy landowners, drug traffickers and multinational companies.

Land was one of the first issues in the peace negotiations. Where previous efforts to redistribute land have failed to respond to the needs of the rural poor, the peace accord resulted in comprehensive agrarian reform, addressing historic grievances with the intention of strengthening how these groups manage their lands. The land restitution process is already allowing some formerly displaced populations to return home.

But the execution of the peace accord is being threatened by a new iteration of the conflict, one that is targeting those brave enough to assert their political voices and lead the process of land restitution and social change. Insecure property rights exacerbate this competition for land and how it is used.

The outrage of government officials in response to these killings has been shockingly absent. After the murder of Bernardo Cuero Bravo — leader of the Association of Internally Displaced Afro-Colombians — officials downplayed the threats he was facing. But Mr. Cuero Bravo had requested protection from the government and was denied.

These attacks are destroying populations’ cultures and social fabrics. And by doing so, they are pushing a lasting peace out of reach. In a survey of 100 community leaders, 92 percent said that when leaders of community organizations are attacked or killed, their organizations suffer or fail to continue, leaving no one to defend rural populations.

All of us wanting peace welcome President Duque’s commitments. But specific actions to protect rural communities are needed, as words alone will not stop the bullets. Fully implementing the peace process will repair the injustices and violence that indigenous, Afro-descendant and peasant populations have experienced in the past half-century, and before.

Most important, all these groups must have their rights and livelihoods protected. For Colombia, the roots of a lasting peace are intertwined with the land.

Omaira Bolaños is an anthropologist and the Latin America program director for the Rights and Resources Initiative.

26th Nov 2019
We're looking for a Part time Financial and Administrative Coordinator, to be based in Edinburgh or distance-working. Closing 8th December 2019