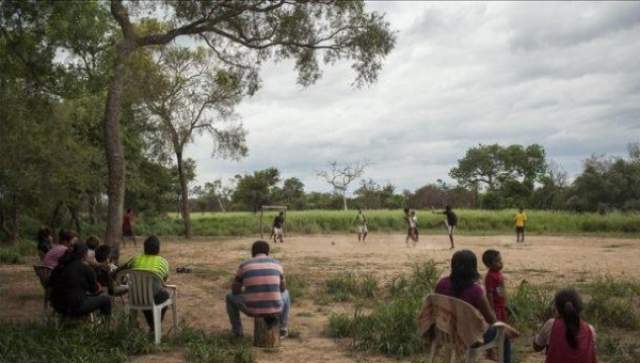 The residents of Cuyabia estimate that from their 25,000 acres of lands, a total of 6,000 acres of forest have already been cleared by German and Brazilian corporations (Photo: Efe).

Government inaction in the face of corporate lands grabs is threatening the survival of local Indigenous communities.

An Indigenous community in Paraguay announced Friday they will engage in direct actions in upcoming days to protest land grabs and the survival of the 'uncontacted' Ayoreo tribe.

The Indigenous community Cuyabia, located in the northeast region of Chaco, have said they will resort to road blocks and marches in order to urge the Paraguay government to finalize the legal demarcation of their lands, which they say is being seized by multinationals.

The residents of Cuyabia estimate that from their 25,000 acres of lands, a total of 6,000 acres of forest have already been cleared by German and Brazilian corporations.

While Paraguayan law is meant to allocate and protect these lands for its Indigenous populations, corporations have blocked its implementation.

A legal measure laying out the territorial boundaries between Indigenous peoples and corporations started its first drafts in June, but has consistenly been delayed. While the government has promissed it would be finalized on Nov. 3, the Cuyabia community is distrustful and hopes their protests will change the power imbalance.

In 2012, 25,000 acres of land from the Cuyabia community were sold illegaly by the former president of the Paraguayan Institute of the Indigenous. He has been in prison since with a 6 year prison sentence.

Not only do the Cuyabia community depend on these lands for their own livelihood, they are also concerned that their uncontacted relatives, the Ayoreo tribe, are at great risk in the face of government inaction and corporate land grabs.

Ayoreo people have been forced to be on the run since their ancestral lands, which has some of the last standing forests in the Chaco region, has been sold to private landowners who have been clearing the land for business.

The leader of the Cuyabia community, Unine Cutamorajna said they are trying to buy them off their lands by “promising them houses” in return for land.

“They want to confuse us, but we won't give not even a little bit of our land,” Cutamorajna told news agency Efe.