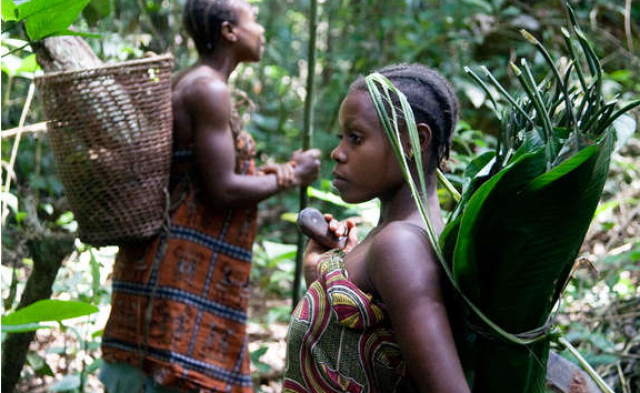 The Territories of Life toolkit is a series of 10 short videos by LifeMosaic that share stories of resistance, resilience and hope with communities on the frontline of the global rush for land.

In partnership with Okani (a community-based indigenous NGO located in the East Region of Cameroon in Africa) we have dubbed 4 films from the Territories of Life series into  both the indigenous Baka language and the indigenous Bagyeli language for dissemination to Baka and Bagyeli communities in Cameroon.

What is the Baka version of Territories of Life?

Previously, the Territories of Life toolkit had been disseminated in some parts of Cameroon using the French and English language versions. Feedback from local groups has been very positive although there was a direct request for local language versions particularly from Baka and Bagyéli areas. Following on from this request we consulted further with Gbabandi – a national organisation to represent Cameroon’s forest peoples and defend their rights at the local, national and international levels, OKANI – a community-based indigenous NGO located in the East Region of Cameroon in Africa, and Forest Peoples Programme – an international indigenous rights organisation that supports the Baka and Bagyéli peoples in Cameroon. All confirmed the high priority for local language resources on land rights to support community awareness-raising and organisation. Currently no such resources are available. Given that the Baka and Bagyéli are of oral tradition, it is expected such resources will be very effective.

“I like the [Territories of Life] videos very much and I watch them every morning before starting my day. The Life Plan approach is particularly a fantastic idea.” Venant Messe, Director of OKANI, Cameroon

Cameroon is one of the largest forested areas in the Congo Basin which makes up the second largest tropical forest in the world and one of the richest biodiversity spots on the planet. It also has one the highest deforestation rates mainly caused by agro and extractive industries. The indigenous Baka, Bagyéli, Bedzang and Bakola peoples are traditionally hunter/gatherers but have no formal ownership of their land and resources and current legislation does not recognize customary land rights. Cameroon is however a signatory to a number of international declarations which give explicit emphasis to the rights of indigenous peoples, so investors in forest concession developments must comply with the relevant international legal instruments applicable to Cameroon.

These versions of Territories of Life will be disseminated to Baka and Bagyeli communities throughout Cameroon and Central Africa including the Ngoyla-Mintom forest block covers over 700,000 hectares in the South East of Cameroon - the biggest expanse of tropical rainforest in the country and a priority area for conservation in the Congo Basin. The area is inhabited by over 10,000 people, 30% of whom are indigenous Baka and Bagyéli, and is impacted by much large-scale deforestation.

Audio versions have also been produced for use by Baka and Bagyeli community radio stations.