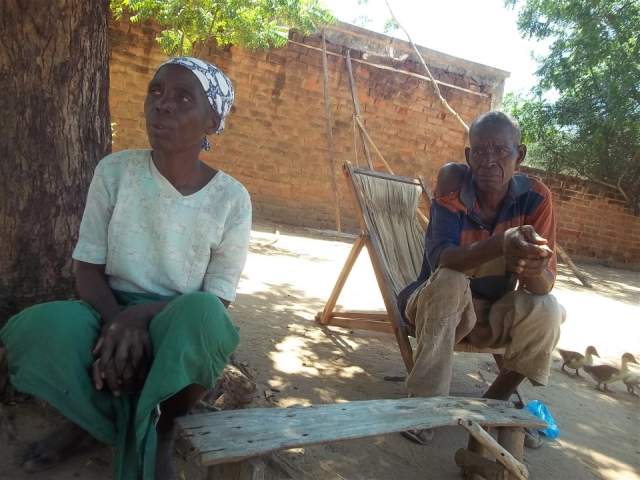 Dorothy Dyton and her husband, Dyton Gerard have lost their land and their livelihood (Photo: Kristy Siegfried / IRIN)

Dorothy Dyton, her husband and seven children used to make a living farming just over a hectare near the town of Bangula in southern Malawi’s Chikhwawa District.

Like most smallholder farmers in Malawi, they did not have a title deed for the land Dyton was born on, and in 2009 she and about 2,000 other subsistence farmers from the area were informed by their local chief that the land had been sold and they could no longer cultivate there.

Dyton and her neighbours did not immediately accept the devastating change in their circumstances. They had already been removed once from the land during former President Hastings Banda’s regime in the 1970s and had not been allowed to return until Banda’s regime ended in 1994 and the cattle ranch established there by his political ally, John Tembo, had ceased to function.

After receiving the go-ahead from the district commissioner, they continued to farm the land for another season. But in 2010, as they prepared to plant, they were met by a police van and the chief, Fennwick Mandala, who warned them not to come back. The next day, the farmers again set out for their fields, but this time they were met by tear gas and rubber bullets and that night six of them were arrested and charged with trespassing.

Since that time, said Dyton, “life has been very hard on us.” With a game reserve on one side of the community and the Shire river and Mozambique border on the other, there is no other available land for them to farm and the family now ekes out a living selling firewood they gather from the nearby forest. The three oldest children have had to drop out of school to help their parents.

“People aren’t getting enough to eat,” said Isaac Falakeza, another community member. “Some are doing piece work on other people’s gardens, others are harvesting water lilies. You can see how malnourished the children are.”

In Malawi, like most other countries in the region with the exception of South Africa, Botswana and Zimbabwe, more than 60 percent of land is customary, meaning that it is mostly untitled and administered by local chiefs on behalf of the government, with local communities merely enjoying user rights.

The system has led to many abuses, with some government officials and chiefs selling off customary lands and dispossessing smallholder farmers who are already competing for dwindling arable land as Malawi’s population increases.

“There’s nothing [they] can do because they’re not protected in any way by the law,” said Blessings Chinsinga, a lecturer at the University of Malawi’s Chancellor College, who is researching the political economy of land grabs and land reform in the country.

In a research report co-authored by Chinsinga, he notes that the issue of “land grabs” in Malawi dates back to Banda's transferring of large parcels of land from smallholder farmers to the estate sector, largely to the benefit of political elites, men like John Tembo who helped sustain his regime.

Following the ousting of Banda and the transition to democracy, the government set up a Commission of Inquiry on Land Reform the findings of which formed the basis of a new land policy in 2002. The policy attempts to address smallholder farmers’ lack of security of tenure by allowing them to register their customary land as private property, but the legislative changes needed to implement the policy have not gone through parliament and the land reform process has effectively stalled.

“Politicians own massive tracts of land; they benefited from the previous system, so they’re reluctant to adopt a new legislative framework that would correct the land imbalances,” commented Chinsinga.

In recent years, the government of recently deceased president Bingu wa Mutharika focused public investment on boosting the productivity of smallholder farmers through its farm input subsidy programme. The programme was credited with several years of bumper maize harvests, but as Malawi went into financial crisis last year, the sustainability of the programme was called into question and the number of beneficiaries was reduced.

Critics of the programme, like international NGO Grain, point out that “all the fertilizers and seeds in the world cannot make much difference for the great mass of farmers in Malawi, who do not even have enough land to grow the food their families need.”

A 2010 report by Grain, noted that Malawi’s lack of land reform had resulted in increasingly inequitable distribution of land, with large tracts of farmland ending up in foreign hands. In 2009, the government allocated 50,000 hectares of farmland to the government of Djibouti, reportedly in exchange for assistance constructing an inland port in Nsanje. The details of this and other such deals are shrouded in secrecy, according to Chinsinga who has focused his research on land transfers relating to the government’s Green Belt Initiative (GBI).

Another programme championed by Mutharika, the GBI aims to acquire 340,000 hectares of irrigable land along Lake Malawi and the banks of the Shire river with the goal of increasing agricultural production and national food security. Several foreign companies have acquired land under the auspices of the programme which, according to Chinsinga’s paper, “views customary land as an unlimited reservoir that can be targeted for conversion for privatization”.

Chikhwawa District is already dominated by sprawling sugar plantations owned by South African sugar giant Illovo Sugar. According to several sources, Illovo is intent on expanding its presence in the area and enjoys government support because of the much needed foreign exchange it generates.

The 2,000 hectares of land once farmed by Dyton and her neighbours is now owned by a company called Agricane, which is leasing it to Illovo for sugar cane production. Agricane’s country director, Bouke Bijl, explained that his company bought the land from a bank which had acquired it from John Tembo after he defaulted on a loan.

Like Chief Mandala, he described Dyton and other farmers who complain they have been dispossessed, as trouble-makers with no ancestral claims to the land. “There was a directive from the District Commissioner that they shouldn’t have been there and should make way for development but they chose not to understand that,” he said, referring to the 2010 standoff between the farmers and security personnel.

Ironically, Agricane's core business is providing technical support to clients, many of them international donors who are implementing community development projects. Bijl noted that the company's biggest challenge in carrying out such projects was the issue of land tenure. “We're seeing a lot of projects collapse because the communities have never been prepared sufficiently to deal with it,” he told IRIN.

He added that once the land outside Bangula starts generating a profit, a trust fund will be established to support community development in the area, and donors will be approached to fund irrigation schemes that would benefit local smallholder farmers.