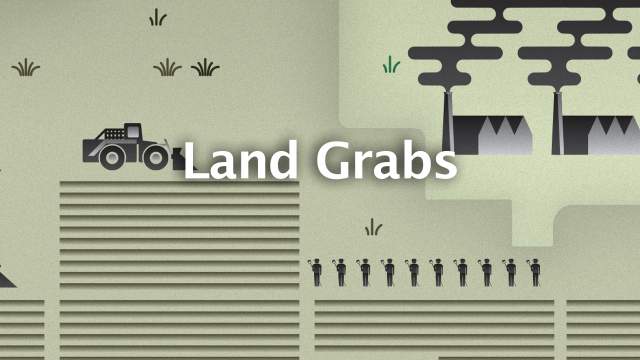 Grains, meat, sugar, palm oil, pulp and paper, coal, aluminium, copper, gold, oil. Just some of the commodities that corporations take from the lands of indigenous peoples to ship around the world in order to generate profits.

A new video by LifeMosaic, part of the series “Territories of Life“, looks at the impacts of this enormous land grab on indigenous peoples around the world.

LifeMosaic’s video acknowledges that sometimes, land transactions take place with community consent and communities end up seeing some benefits from the new development. But all too often, communities are forcefully evicted, threatened and intimidated. Standards are weak. Deals are often not transparent. These are land grabs.

The Tirana Declaration, produced during a meeting of 150 civil society representatives in 2011, defines land grabs as land deals or concessions that are at least one of the following:

On its website, LifeMosaic estimates that between 2000 and 2010, land deals covering a total of 30 and 50 million hectares were concluded in Africa, Asia and Latin America.

Around the world, the territories of many indigenous peoples are under threat. LifeMosaic’s video “Land Grabs” describes what these threats are, why they take place and what the impacts are on communities and their environments:

The video looks at the colonial origin of land grabs, and how they relate to today’s corporate land grabs. From the 15th century explorers set sail from Europe in search of riches and land. In many cases, Europeans declared the land “empty” and took indigenous peoples’ land. Often violently.

“Beggars on our own land”

Europeans used the riches from the land to develop empires, which lasted hundreds of years. But independence from colonists did not mean that lands were returned to indigenous peoples. The new states retained control of the land. And today many governments continue to hand out indigenous peoples’ land to corporations and investors.

“What is the difference between the colonisers and the companies that come now? The company comes, takes and leaves. They develop their own places, the places of their ancestors, wherever that is. And we just watch and become beggars on our own land.”

“Everything is born from territory”

Different people see different things when they look at land. Government officials may see land in terms of national development. Corporations see land as an asset to generate profits. For indigenous peoples, however, land is something completely different, as Manuel Usa Tunabala from Colombia explains:

The video includes interviews with communities from Indonesia, Cameroon, Paraguay, Ecuador and Tanzania who have seen their livelihoods taken away by land grabs. Mokwalibe Nguti is angry about the impending destruction of his community’s forest in Cameroon:

“This forest has been sold, without the knowledge of we, the custodians of the land. They never even called us. We are not happy. We don’t want them to enter this land. This is our land. Without even our knowledge.”