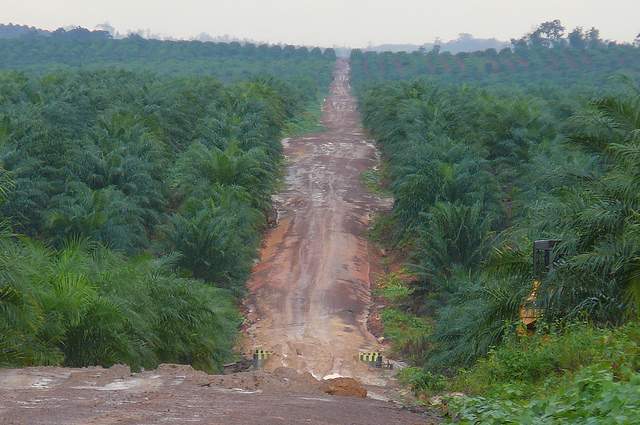 Greenpeace Indonesia describes the extension of the moratorium as a copy and paste exercise, with little changed except the date and the time period that the moratorium runs.

“Of course we are disappointed with the president for simply extending the previous policy with no significant change,” Greenpeace campaigner Teguh Surya told Mongabay-Indonesia.

A copy of the moratorium can be downloaded here (in Indonesian).

Greenpeace is calling for the moratorium to be strengthened, to prevent the destruction of 48.5 million hectares of forest not covered by the moratorium.

Full of loopholes and no punishments for violations

Introduced in 2011 and extended in 2013, the two-year moratorium was never a serious attempt to stop deforestation, given the built-in loopholes. The moratorium does not apply to:

PT SAL’s 17,059-hectare concession was awarded in 2012, a year after the moratorium came into force. The company can operate in breach of the moratorium with impunity, because it is only a Presidential Instruction and includes no punishments for violations of its terms.

Once again, the 2015 extension to the moratorium is a Presidential Instruction.

In 1996, then-President Suharto started Indonesia’s Mega Rice project. The idea was to make Indonesia self-sufficient in rice by creating one million hectares of new rice fields in Central Kalimantan. Suharto’s cronies cleared more than one million hectares of forest, but not a single grain of rice was harvested. 60,000 people moved to the area to work on the project, many of whom are still there.

Here’s how Professor Jack Rieley of the University of Nottingham described the result of the Mega Rice project in a 2001 article:

By the time the project was abandoned, major damage had been done to the regional and global environment. Forestry resources had been ransacked, government money had been misappropriated, and the economy and quality of life of indigenous people had been irreparably disrupted. Five years after the Mega Rice Project commenced, one million hectares of wetland landscape lie in ruins, a wasteland testimony to human greed and stupidity.

Almost 20 years later, it seems that President Joko Widodo wants to repeat Suharto’s mistakes. But this time on an even larger scale.

On 9th and 10th May 2015, Jokowi travelled to Papua. He visited Merauke and announced a plan for 1.2 million hectares of new rice fields to be developed within three years.

That’s just the start. The development would eventually cover 4.6 million hectares. According to Jokowi, that is. There are no formal plans for any of this.

As the website awasMIFEE! points out, it sounds almost as if Jokowi was making it up as he went along. He told bisnis.com that,

This morning I decided that we should start this year. I’ve given a target of 1.2 million hectares that must be operational within three years.

Every six months Jakarta is to provide US$534 million to clear 250,000 hectares to make way for the rice fields. This would be large scale industrial agriculture, as Jokowi explains:

“It would be impossible to work this land by hand, even if we worked until judgement day. Modern machines much be used. Merauke will be the first place to use these modern machines, as yet there are none in Indonesia.”

Jokowi was in Merauke at the invitation of Arifin Panigoro, the head of the Medco Group. Medco has a 248-hectare experimental mechanised agriculture plot in Kurik District. Jokowi was obviously impressed.

The impacts of the MIFEE project are already serious. In 2013, Forest Peoples Programme reported that it was causing poverty and starvation for local communities.

The proposed area of 4.6 million hectares is larger than Merauke Regency, which includes Wasur National Park and other protected forests. Some of the land has already been allocated under the MIFEE project as oil palm and sugar plantations. And the fact that the land belongs to the indigenous peoples of Merauke presumably just slipped Jokowi’s mind.

Jokowi’s Mega Rice plan in Papua is covered by the moratorium’s “national development” loophole. If Jokowi wanted to demonstrate the irrelevance of the moratorium, he couldn’t have done better than announcing a plan for 4.6 million hectares of new rice fields, just days before signing the extension of the moratorium.