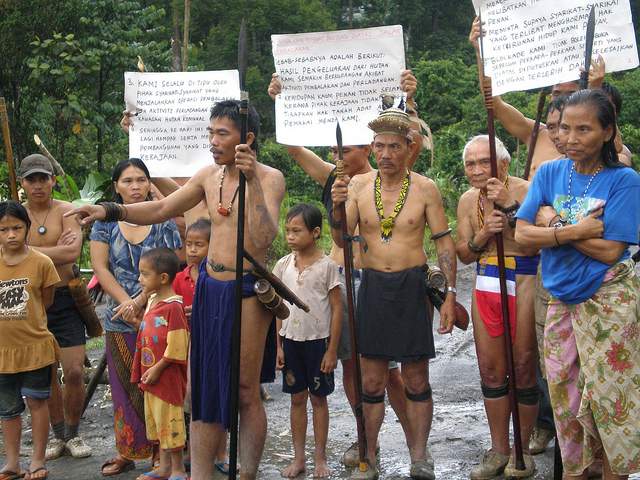 In 2008 Penan communities in Malaysia mounted a road blockade against the logging company Interhill, in an attempt to stop the destruction of their last remaining rainforests, after negotiations with Interhill’s representatives at the company's timber camp failed. (Photo: FOEI)

At least one out of every three hectares of land licensed for commercial exploitation in emerging economies overlaps with land to which indigenous communities have a claim, according to a study of 12 countries released on Thursday, highlighting the importance of potential land rights disputes in business deals.

The analysis for the Rights and Resources Initiative (RRI), a global coalition of groups working on forest tenure reform and policy, is the first attempt to quantify the risks associated with local land rights for investors that enter into agreements with governments to exploit natural resources. The findings come amid rising international interest in sourcing commodities from developing countries - in sectors including agriculture, forestry and mining.

Investors and operators tend to overlook land tenure risk when considering projects, mainly because it is not evaluated by ratings agencies and insurance companies, the report said. This neglect has triggered tensions with local people who fear the assets they need to survive will be taken from them, resulting in social unrest and a significant financial cost for the companies involved.

“We don't want to give out the message that this is an unresolvable issue,” said Lou Munden, chief executive officer of The Munden Project, a climate risk consultancy that carried out the study. “In almost none of the cases did we see the phenomenon that this is a zero-sum game. A more pro-active approach (to involving local people) would be beneficial.”

Using Geographical Information System (GIS) mapping technology to analyse more than 153 million hectares across Africa, Asia and South America, the researchers found that 31 percent of the land area of commercial concessions is also used by communities, putting at risk some $5 billion of potential agricultural production. The figures are likely to be an underestimate, due to the limited data available, the report noted.

In Argentina, more than eight in 10 national soybean concessions include community-claimed areas, with an average land overlap of 26 percent. And in Cameroon, 83 percent of commercial timber concessions incorporate community forests, putting a potential value at risk equal to 0.4 percent of the country’s gross domestic product (GDP).

Analysis of mining concessions in Chile, Colombia and the Philippines revealed that 30.5 percent of the land area within affected concessions is overlapped by indigenous territory. Land disputes over the Philippines Tampakan mining project, for example, have placed $5.9 billion of investment at risk in a project that was forecast to add 1 percent to GDP, according to the report.

In a separate report for RRI, released in February, The Munden Project estimated that the operating costs of a three-year investment of around $10 million could be as much as 29 times higher than a normal baseline scenario if the project were forced to stop its activities because of local opposition.

“The point of this (research) is to inform private-sector investors who are interested in large-scale land deals, and to provide them with a baseline to think about this issue,” said Bryson Ogden, a private sector analyst with RRI.

“We are not saying that these deals don't need to happen. Developing countries want foreign investment, and local people want these opportunities as well… The world needs resources, we need industry, we just need to make sure they are happening in ways that are good for all the parties involved,” Ogden told Thomson Reuters Foundation.

The study urges investors to carry out local-level mapping of their concession, then to examine the national context, including corruption levels, land laws, and the frequency of legal disputes and violent protests over land-based projects. Based on this information, the risks should be managed by engaging with communities and obtaining their buy-in.

The report does not specify how this should be done, but cites a small number of examples where companies have offered business opportunities, new road and electricity infrastructure, and a system allowing communities to monitor the environmental impacts of a project.

Munden said it was important to involve local people in the economic activities generated by the concession, such as creating jobs for them, adding that this might be easier with farming and forestry projects than mining.

RRI's Ogden said the common practice of investors building facilities like schools and hospitals for local people in places where they operate does not compensate for “the value of where they lived for generations”. Munden said this approach “implies you can buy them off”. Both called for the development of a new model that addresses land tenure risk in a more inclusive way.

“Investors should assess communities as counter-parties in the deal,” Munden told Thomson Reuters Foundation. “If you understand their claims, that is pretty important because you can probably satisfy them, but the downside of not doing so is likely to be significant.”

The researchers said in the study that they had examined hundreds of qualitative reports on land tenure conflict, and that “the vast majority of conflicts we reviewed were perfectly avoidable”.

The report is released to coincide with a conference in Switzerland this week that aims to expand global efforts to map and document community lands, legally recognise and ensure respect for local land rights, and boost private-sector support. The two-day meeting is organised by RRI, the International Land Coalition, Oxfam, the International Union for Conservation of Nature and HELVETAS Swiss Intercooperation.

“Multinational companies and investors worry about (land tenure risk) because when there is a conflict, it really does damage to their reputation,” Munden said. “I think that if they can avoid it a reasonable cost, they would like to do so.”