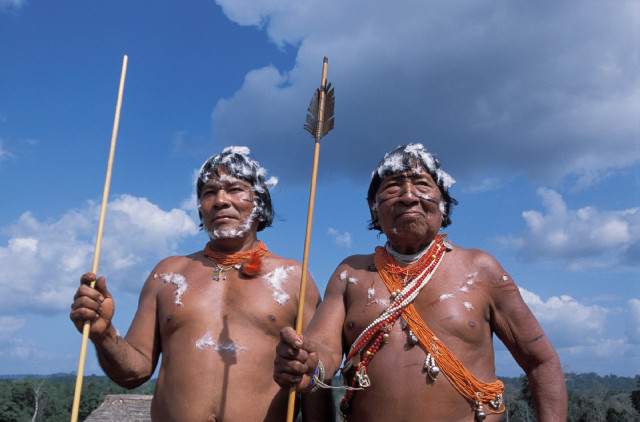 Wai Wai elders with arrows in Guyana. These and other indigenous peoples have been highly dependent on these lands for thousands of years. (Photo: John Martin / CI)

At the beginning of 2013, indigenous peoples in Guyana are becoming increasingly alarmed over continuing and growing disregard for their legitimate rights by miners and government agencies and gross rights violations which have been endorsed by the judiciary in two recent cases. In 2012, the mining lobby publicly attacked indigenous peoples’ land rights in the Guyanese press and pledged to oppose recognition of customary lands. Meanwhile, the government agency responsible for regulating the mining sector appears to be accelerating the issuance of mining permits and concessions on Amerindian customary lands, despite the fact that these same lands are the subject of legal actions in the courts seeking recognition of traditional ownership rights and/or unresolved village applications for land title and title extensions.

Recent events and court rulings on mining conflicts on Akawaio Village lands in the Middle and Upper Mazaruni are tragic examples of this blatant violation of indigenous peoples’ rights by the mining sector. In response, Akawaio leaders and communities are standing up for their rights and challenging mining encroachment on their traditional lands and waters. For the past year, Kako Village in the Upper Mazaruni District has been forced into a court battle brought against them by a miner when they refused her entry to the Kako River to start a mining operation. The Village leader (Toshao) has also been cited for contempt of court and now faces possible imprisonment after his people took peaceful direct action to prevent the miner from entering their land in contravention of a court issued injunction that the miner be allowed to proceed unhindered.

“It is known that we are the protectors of these lands and we depend on these lands. Our land is our life!” declared Toshao Mario Hastings as he spoke of the importance of his community’s land to his people.