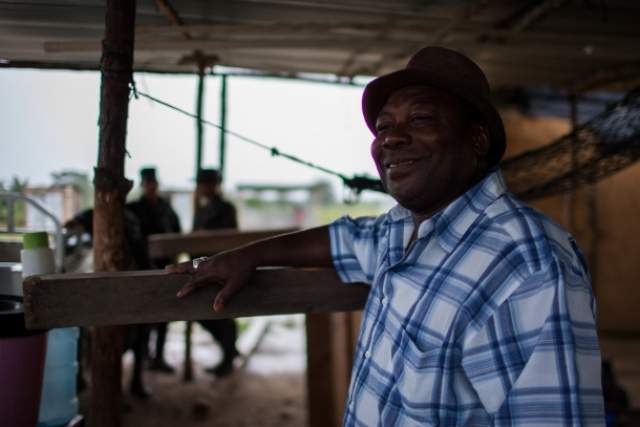 Along the Atlantic coast of Honduras, Afro-Caribbean Garifuna communities are being forced from their land, as proposals for the creation of mega-tourism projects and corporate-run cities, commonly referred to as “model cities,” gain momentum internationally.

Congress is set to vote on one such plan this summer. Originally proposed by Vice President Joseph Biden in January, the plan would provide the governments of Central America $1 billion — on top of previously existing aid agreements — to bring further investment into the region. While the stated goal is to improve security and generate opportunity to combat the so-called root causes of illegal migration, Biden’s plan is essentially a continuation of the Central American Free Trade Agreement and Plan Mesoamerica and will only make it easier for multinational corporations to invest in more community-damaging mega-development projects throughout the region.

As critics have pointed out, the plans create negative blowback for the people of the region, including increased social conflict and environmental destruction.

“The United States government is funding our government to evict us,” said Angel Castro, a resident of the Garifuna community of Vallecito. “They are not here to support the people of African descent, let alone the people of Honduras.”

The connection to the economic model of accumulation by dispossession is not lost on Castro. He added, “This is part of capitalism and the politics of neoliberalism.”

Mega-projects are just one of the problems that Honduran Garifuna communities have had to face in the six years since a U.S-supported coup d’etat removed then-President Manuel Zelaya from power. Now, they have begun to organize and to defend their land through nonviolent resistance.

The Garifuna communities have called the Atlantic coast of Honduras home for centuries and have developed their own culture, language, food and music. They are the descendants of African slaves, and the indigenous Arawak populations who were deported from British St. Vincent Island in 1797. Today, Garifuna communities span the Atlantic coast from Belize to Nicaragua, with 48 communities in Honduras, in the departments of Cortés, Alántida and Colón.

In the early 1800s, the Honduran government gave the communities the legal titles to 2,500 acres of land. Since then, they have held this land collectively, sustaining themselves with fishing and agriculture.

Now, these communities are facing eviction to make way for the construction of development projects supported by neoliberal economic policies such as the Alliance for Prosperity and the Strategy for Engagement. Additionally, the expanding interests of narco-traffickers and African palm oil plantations have forced the communities from their land.

“We are all suffering the same situation,” said Selvyn, from the community of Porto Cortez. “We are all being evicted from our lands. The state has decided to exclude the communities from the national conversation.”

But faced with evictions to make way for mega-projects, and threatened by heavily armed narco-traffickers, the Garifuna communities have decided to dedicate themselves to nonviolent resistance in defense of their territory. Rows of African palm for the production of palm oil welcomes visiters to Vallecito. African palm has spread like a virus across Garifuna territory and Honduras. (WNV/Jeff Abbott).

In August 2012, members of communities across the Honduran Atlantic coast reclaimed the heart of their territory from encroachment by narco-traffickers, mega-tourism projects and the expansion of palm oil. They founded the community of Vallecito in the territory that the Garifuna consider to be their ancestral land, a mile inland from the sea.

As in many indigenous cultures, the land and sea are linked to the identity of the Garifuna people and are crucial for the continuation of their society. The communities argue that the assault on their territory is also an attack on their identity and culture.

“The sea and the beach are essential for the Garifuna people,” said Guillermo, a resident of Vallecito. “It is part of my life; it is what it means to be Garifuna.”

The nonviolent resistance used to defend their land is also part of the Garifuna identity.

“The Garifuna Village are a peaceful people,” said Yilian Maribeth David, from the grassroots Fraternal Black Organization of Honduras, or OFRANEH. “We have never used weapons or violence in the struggle for the recovery of land, or in the demonstrations in major cities against the violations of the rights of our peoples.”

The Garifuna communities have not received classes or training in nonviolent tactics. Rather, their dedication to nonviolence comes from their religion.

“We have not been taught about peaceful struggles,” David said. “Rather, the Garifuna spirituality is the keeping of the practice of peaceful struggle. This is because our religion is based on belief in ancestors who give signs in dreams and visions of when and how to perform an activity and also indicate at what point to stop. This is all led by shamans.”

But the communities’ situation is deteriorating, and their peaceful resistance is being countered with violence.

In the years since the coup, developers have found new support from the government when they steal land from small-farming and indigenous communities. It is in this environment that the Garifuna have organized to defend their land.

“The communities will not sell their land,” said Celso Alberto, from the community of Santa Fe. “So the government has been expropriating the land.”

The tourism industry has been expanding along the Honduran coast since the mid-1990s. But in the last three years, tourist development projects have expanded, and so too have the evictions. The Garifuna communities’ seaside locations drive the dispossession of their land for the construction of mega-tourism projects.

The projects are part of Plan Mesoamerica, which promotes the creation of a tourism corridor from Belize through Honduras along the coast. Communities argue that these projects do nothing for them and only commodify their culture.

“People only come to consume the culture, drink gifi-tea and watch us dance,” said Cesar Leonel, a young Garifuna and member of the Network of Community Radios of Mesoamerica. “They stay in these hotels in Garifuna territory, where there may only be two or three Garifunas working there.”

Additionally, the communities’ locations make them vulnerable to encroachment by palm oil producers and narco-traffickers. Therefore, defending territory has also come to mean defense against these legal and illegal industries. By recuperating the land, the Garifuna communities will be able to continue to slow down the transportation of narcotics through their territory.

Since 2012, the community of Vallecito has through their permanent presence successfully kept the local narco-traffickers from reconstructing a transit point along the coast, which was destroyed by the Honduran military. But the communities have faced intimidation and violence from the traffickers. Cesar Leonel plays a drum in the center of the Vallecito community, as the three soldiers sit at the periphery of the gathering. (WNV/Jeff Abbott).

The Honduran government responded to these threats by deploying a small group of soldiers to “protect” the Garifuna community. Three soldiers now maintain a permanent presence at the entrance of the community’s territory. But the community members of Vallecito do not see the benefit of the soldiers’ presence.

“The military is only the appearance of protection,” Guillermo said. “They change the soldiers every month, so they don’t get too close to our movement.”

Despite the successes against the narcos, the Garifuna communities still remain vulnerable to eviction to make way for tourism projects.

“The state is illegally selling our lands,” Leonel said. “We are facing the systematic eviction of Garifuna communities for foreigners to buy our lands to build massive hotels.”

For the Garifuna communities, the defense of territory and identity is also a struggle against the forces driving them to migrate to the United States in search of opportunity.

“When the communities don’t have the space to reproduce their culture, of course they migrate,” Leonel said.

The communities have also begun pursuing their own development projects to create opportunity for themselves. This has included the formation of self-sufficient spaces on the recuperated lands. There, they grow almost all the food they need and continue the tradition of fishing. For them, land recuperation is also the defense of the right to food sovereignty and the right to subsistence as a community. Three Garifuna men set off to fish from the beach in the community of Sambo Creek. (WNV/Jeff Abbott).

“Our vision is not to commercialize our land,” Guillermo said. “Rather, we are sowing all the seeds for the food we need to eat.”

The communities, along with the OFRANEH, have worked to develop projects that provide opportunities to their own people.

“In view of the massive exodus of women, youth and adolescents to the United States in the past two years, OFRANEH is working in various branches for the purpose of providing an income option to the Garifuna people,” David said.

OFRANEH and the Garifuna youth and women’s organizations have formed projects to create opportunity. The youth have mobilized to a create a pig farm, a banana plantation and a tilapia hatchery. According to David, “These projects were formed with a vision to keep the youth busy and interested, as well as at the same time maintain the land.”

The women’s group has focused on planting foods like rice, beans, chiles and yucca.

“The planting of basic foods has declined at an alarming rate due to the proliferation of planting monocultures [like African palm],” David said. “So women are focusing on the issue of food sovereignty and food security.”

Along with land recuperation, the Garifuna communities have utilized national and international conventions in the defense of their territory.

The communities hold six titles to their territorial land. These titles are all held in common among the people, making it impossible to sell individual tracts.

But despite these titles, the state and the Honduran land agency have systematically sold the land of the communities to international interests. The communities have pointed out that these sales are illegal.

At no point, though, have the Garifuna communities ever been consulted on the use of their land. The state has countered that the communities do not fall under the groups protected by the convention. But the communities have maintained their demands to be consulted.

The Garifuna communities face a bleak situation, but they have reached out across borders for aid in their struggle to defend their territory.

The communities are working to draw international attention to their plight. Specifically, this movement of black Hondurans is working to build connections with the Black Lives Matter movement in the United States.

“The connection with Black Lives Matter was born following a meeting on migration and culture in Los Angeles in April 2015,” said David. “We agreed and decided that if black organizations come together regardless of borders, we can achieve results. Every time there is a fight with them, we declare ourselves to be in solidarity. And every time something happens to us they will do the same for us. We are unifying our voices.”