Gender relations are changing along with climate 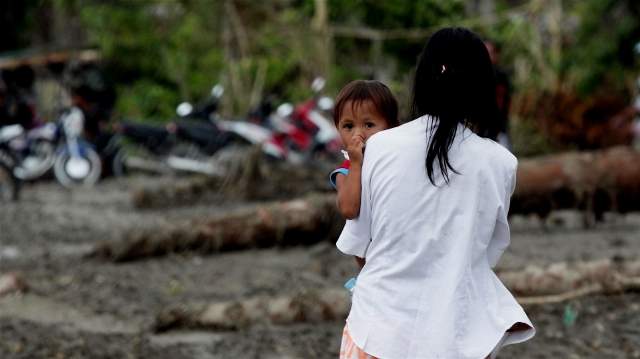 A mother and her young child return to their devastated farming village in Mindanao. (Photo: Jason Gutierrez / IRIN)

A changing climate will inevitably have an impact on gender relations in rural communities, but not enough is being done to boost the resilience of women - already disadvantaged by traditional inequalities.

The UN International Strategy for International Risk reduction (UNISDR), has been arguing for mainstreaming gender in disaster risk reduction programmes for over a decade. “Disasters don’t discriminate, but people do,” the agency noted. “The potential contributions that women can offer to the disaster risk reduction [DRR] imperative around the world are often overlooked and female leadership in building community resilience to disasters is frequently disregarded.”

The need for gender awareness in programming became apparent after the Asian Tsunami in 2004, in which more women than men were killed. Research by Oxfam in parts of Indonesia and India after the wave struck found that women were more vulnerable partly because they were more likely to be unable to swim, and many were in harm's way because they were standing on the shore waiting for the men to bring in the fish they would process and sell.

The development agency CARE, along with Kulima Integrated Development Solutions, a South Africa-based consultancy, is trying to develop a methodology to conduct gender-sensitive vulnerability analysis. “Most NGOs have longstanding gender commitments, and are beginning to incorporate them in their climate change adaptation and disaster risk reduction,” says Kulima’s Katharine Vincent, who is working on the methodology using Mozambique as their testing ground.

“However, what we have noticed is that despite ongoing theoretical commitment, there is a lack of support tools (handbooks, guidebooks, methodologies, etc.) which particularly address questions of how to integrate a gender-sensitive approach to CCA [climate change adaptation] and DRR projects. CARE have observed that their own Climate Vulnerability and Capacity Analysis (CVCA), whilst widely respected and used, could be stronger in advocating a gender-sensitive approach,” she added.

So far, CARE's CVCA has been updated and now includes questions directed at women and men separately - providing women with a freer voice.

Although NGOs and aid agencies are beginning to look at gender, Babette Resurreccion, a senior researcher at the Stockholm Environment Institute, believes a more transformative agenda is needed. While lauding efforts to consider gender-specific vulnerabilities to make men and women more resilient, she noted that “Bouncing back to normal [the conventional meaning of resilience] should not include bouncing back to a situation of gender inequality.