Food from Brazil’s Amazon finds its way to metropolitan tables 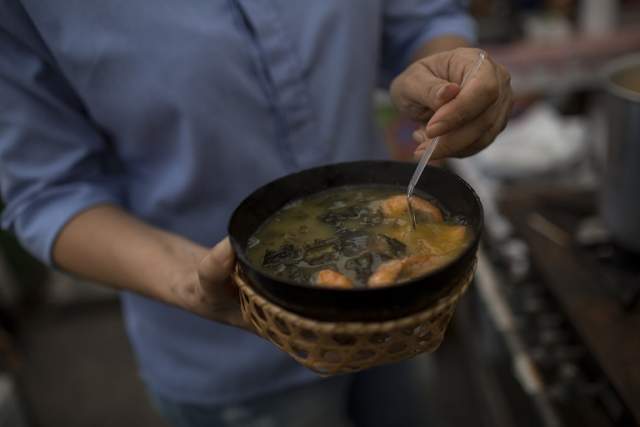 Vângela Veloso, owner of Império do Pará, holds a bowl of tacacá, her most popular dish. Her food tent only serves plates from Pará state in the Amazon, bought by Vângela every six months. Photo by Mauro Pimentel for Mongabay

Amazonian ingredients have long been used by indigenous peoples, many of whom still rely on the Amazon rainforest for subsistence.
As forest-sourced ingredients find their way into more restaurants, observers are concerned about this new industry’s impact on the Brazilian Amazon and forest-dependent communities.
World-renowned, two-star Michelin chef Alex Atala is at the forefront when it comes to the sustainable use of indigenous ingredients.
SAO PAOLO, Brazil – For more than a decade, cook Vângela Veloso has traveled twice a year from Sao Paolo to her hometown Pará in the north of Brazil with empty bags. She returns with peppers, jambu, shrimp, tapioca and other goods harvested in the Amazon. The bounty from Brazil’s north is then prepared by her and her family and served at their popular food tent, Império Paraense (Empire from Pará).

Ana Rodrigues said that about five years ago, Veloso’s place was the only source of northern Amazon forest-based dishes they could find. Things have changed, though they still make the 30-minute drive every Sunday to the restaurant.

“Now we can see how ingredients and the cuisine from the north…are growing all over town,” she said.

Veloso’s food tent is part of an Amazon “rainforest to table” trend that has steadily grown over the past 20 years. The trend highlights dishes and products based on ingredients from the Amazon for use at eateries ranging from food tents like Veloso’s to specialty grocery stores to Michelin-star restaurants. Whether it’s a boon to the public profile of a region few Brazilians ever visit or a potential over-exploitation of forest resources depends on where you look.

The northern Amazon where Veloso finds her goods consists of seven northern Brazilian states that comprise 80 percent of the Amazon rainforest. Its food is mainly composed of fish, fruits, vegetables and tubers that are endemic to the region. Most dishes utilizing ingredients from the region were first explored – and adapted – by indigenous peoples and later mixed with African and Portuguese ingredients.

Until recently, northern Amazon food was unknown to most Brazilians.

“Food from the north was almost as unknown to Brazilians as it was to foreigners,” Fred Tibau, a chef and professor of Brazilian food, said. About 20 years ago things began to change when things like açaí and cupuaçu – typical fruits from the Amazon forest – and tapioca, a powder that is the basis of indigenous food, began to appear in almost every store. Although there is no official data to measure the growing interest in food from the region, experts like Tibau say there is a trend.

“A simple walk around the two biggest cities in the country, Rio and Sao Paolo, shows that plates like tacacá are not unknown by the public anymore,” he said.

For historian and professor at Universidade Federal do Pará, Leila Mourão, the integration of Amazon culture with the rest of the country was intensified in recent decades by both official public policies and an increase in the income of the Brazilian middle class.

“People started to actually go to different parts of the country, like the north, that was not usually visited, getting to know and connect with national cuisine,” Mourão said. Improved infrastructure has also helped various foods make their way to big cities in the south.

From indigenous fare to Michelin
Despite growing popularity among the masses, it is D.O.M., the restaurant of the renowned two-star Michelin chef Alex Atala, that is considered the ambassador for the rediscovery of Brazilian food. Atala is credited with pioneering “new Brazilian cuisine” and bringing previously overlooked indigenous ingredients into the spotlight. His food is described by Michelin guide inspectors as “a reference point for Brazilian cooking,” and he was the subject of a popular Netflix documentary “Chef’s Table.”

Atala intertwines a range of ingredients he often sources personally from the north into his dishes, including black rice, palm hearts, indigenous herbs, nuts, white corn, fish, and even ants.

“I am lucky to come from a family that has always loved to travel around Brazil,” Atala said in an interview with Mongabay. “My father used to camp specially in remote places, like the Amazonian forest and with four kids in one car, you couldn’t take a lot of food, so we used to eat what we could find, or fish.”

As a chef, Atala draws inspiration from his life experiences and Brazil’s Amazonian rainforest.

“When I decided to cook, I soon understood that I would never make French food like a French chef, because I lack the understanding of that food culture,” he said. “So, I’ve turned to my own culture and country and decided to explore its ingredients. And in that, I had an advantage from other international chefs working in Brazil: I knew the good ones, I knew where to find it, because I had been everywhere before.”

Even so, getting in touch with indigenous tribes was a new concept. It is from those tribes that Atala got some of the foods that can be found on D.O.M.’s menu. Among them is one of his most famous ingredients, Amazonian ants. He has served ants in ways that include them sitting simply on a cube of pineapple to glazed in gold on a meringue. He learned how to use ants in cooking from an indigenous tribe during one of his many expeditions in the Amazon forest.

Atala believes that an ingredient just needs to have its moment.

“Sometimes, the chef is ready to use the ingredient, but it is not ready to face the chain involved in the use of that ingredient and food,” he said.

“That’s why, today, I also work with anthropologists, because for a long time I was not ready to deal with this complex chain. Once I got this, I went to look for professionals that could tell me how to understand other people’s culture, learn from it without imposing mine.”

Seeking sustainability
That mentality has guided Atala as he has sought a sustainable way to find and use Brazilian raw materials. He aims to promote and use forest products without negatively impacting the natural balance or local cultures that depend on them to survive.

He has reason to be concerned.

In 2002, when Oprah Winfrey named the Brazilian Amazonian açaí one of the healthiest fruits, the price per unit in the north skyrocketed by 650 percent. Açaí is a base nutritional element for local communities, and it quickly became unaffordable to a population that depended on it.

“Consumption needs to be planned,” Atala said. “Just because you are putting money into a place doesn’t mean it is going to benefit the area. Actually, it works the opposite most times.”

Still, for Atala, popularization of northern food remains the best way to preserve the local culture and food.

“You are only able to fight for the preservation of something when you have empathy, when you are known,” he said. “The arrival of north gastronomy needs to be cautious, because you’re messing with an ecologically and culturally [rich] environment, but fragile in preservation policies.”

Atala believes fundamental changes on many levels are needed.

“We need to change the way we relate to food. We have to have a symbiotic relationship, not exploitation,” he said. “The popularization of these ingredients, the increase in consumption will generate greater demand and many just want profits without worrying about sustainability. We need to be careful.”

One of Atala’s initiatives in promoting sustainable Brazilian food culture in large cities is through a partnership with the Municipal Market of Pinheiros, in São Paulo city. In the same place people buy their daily vegetables and fruits, they can also buy sustainable ingredients and food from all regions of the country. All are certificated by his own initiative, ATÁ – an institute he started in 2013 with nine partners.

ATÁ’s mission is to foster the sustainable production of Brazilian ingredients as a way to strengthen social and agricultural diversity, bolster indigenous territories, and guarantee good food for people and the environment.

Current projects ATÁ is engaged in with indigenous communities include the production of Yanomani mushrooms and the unique Baniwa pepper from the Baniwa tribe. ATÁ is also working with the Kizedje community, along the Xingu river, on the production of Pequi oil. They also work with other tribes that consume the saúva ant, which is served in Atala’s restaurants. The production of the oil and the pepper can be found in Municipal Market of Pinheiros.

“With initiatives like this, you can preserve and disseminate the culture, bringing income to these populations and improve the quality of life for producers, respecting their way of life and work,” said Atala. “It is the ideal.”

For Alexandre Dhein, gastronomy chef at PUC/PR (Pontifícia Universidade Católica), one of the most respected gastronomy institutions in the country, Atala is part of a growing, global trend.

“There is a movement now, throughout the globe, of going back to the origins, of keeping it simple,” said Dhein. “Food from the forest, from indigenous tribes is exactly this in the Brazilian cuisine. So, this is part of an international trade, yet, it is very national, in the sense of a rediscovery of locals with their own country and identity.”