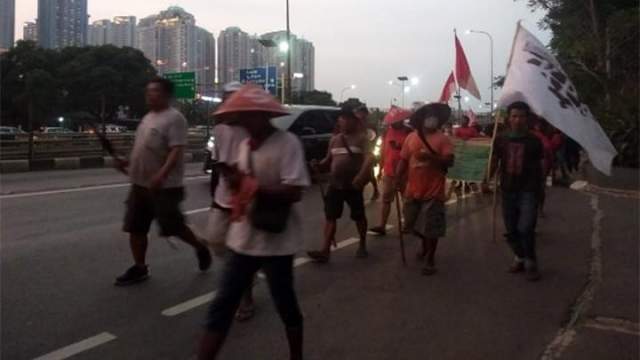 Farmers from Deli Serdang regency, North Sumatra, arrive in Jakarta on Aug. 7, after walking thousands of kilometers from their homes to the capital city to protest a land dispute. (Tempo.co/-)

Hundreds of farmers have walked thousands of kilometers from their homes in Deli Serdang regency, North Sumatra, to the capital city to demand that President Joko “Jokowi” Widodo settle a land dispute that evicted them from their farmland.

Some 170 farmers walked 1,812 kilometers from their hometown to meet the President, arriving in Jakarta on Sunday after a 45-day-long journey, Aris Wiyono from the United Simalingkar Farmers Union said.

“Many of us have been living in cowsheds after we lost our homes and farms. We decided to walk to Jakarta because regional administrations could not give us any solutions,” Aris said in an online press conference on Monday.

“Conflict could ensue if we decide to fight for our land. Walking to Jakarta is the only way to minimize victims and avoid criminalization.”

The farmers plan to stage a protest in front of Merdeka Palace in Central Jakarta on Tuesday.

Aries said after arriving in Jakarta that the farmers held a meeting with officials from PTPN II, the State-Owned Enterprises Ministry and members of the House of Representatives, but they were not given any solutions.

“We want President Jokowi to settle the dispute once and for all,” he said.

Benny Wijaya from the Agrarian Reform Consortium (KPA) claimed the land conflict, taking place in two villages in Deli Serdang, was only the tip of the iceberg for land dispute problems between farmers and state-owned enterprises.

He said the conflict set a bad precedent for President Jokowi's vow for agrarian reform.

“In reality, we are still seeing a lot of land conflicts even amid the COVID-19 pandemic.”

Benny expressed hope that the government could settle the dispute as soon as possible to prevent more farmers from becoming victims.