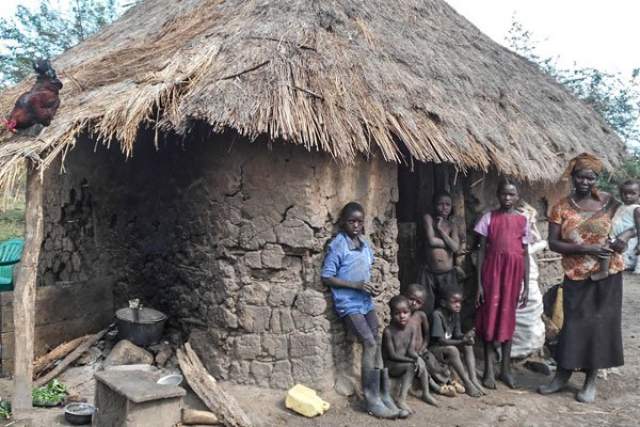 Family members in front of their grass-thatched hut that faces demolition in Kiryandongo District last Wednesday. PHOTO BY BILL OKETCH

The government says the contentious territory was empty space and unoccupied public land but residents claim they hold it under customary ownership. The resident district commissioner (RDC), Mr Peter Debele, said “encroachers took advantage of the empty space” to settle in the vast fertile ranches.
“They went there on their own without being allocated. So, government has come out and allocated the land for serious farming activities,” the RDC said last week.  Mr Debele added that the government also directed the developers to compensate those who were found on the land. However, he did not reveal how much money was paid out as compensation.

“I am not sure if we should call it compensation, but it was goodwill,” he said.
But the evicted residents claim President Museveni allowed them to settle on the land in 2012.
So far, Agilis Partners, a US company, Great Season, a firm owned by Sudan nationals, and Kiryandongo Sugar Limited have acquired the land under leasehold, Daily Monitor has established.
Agilis Partners is currently preparing the land to grow simsim (sesame), maize, sunflower, and soybean. Kiryandongo Sugar Limited is planting and producing sugar and Great Season is growing coffee.

Mr David Isingoma, 83, who has been evicted from Kisalanda Village in Mutunda Sub-county, said he has lived in the area all his entire life. The father of 25, who owns cattle, among other properties on his 100-acre land, said the whole village has been fenced off and all villagers ordered to leave.
Ms Janet Akello and her family of nine said they have also lived in the area for the last 15 years.
“The land has all been dug out and we don’t have anywhere to plant our own crops for survival,” Ms Akello said. “The situation here is worsening each and every day. …We have been blocked from accessing water sources and I have been told that my house is going to be graded any time,” she added.
Mr Joseph Walekula said area leaders have kept a deaf ear as residents are being evicted.
“Our rights are being violated to the extent that our women and children cannot even go and fetch water, there is no food; tractors have surrounded our homes and nobody is helping,” he said.

What residents say
The evictions commenced last year without consent from residents, according to human rights activists.
Residents and human rights activists said tractors are currently pulling down schools, churches, banana plantations and homes. They said the evictions, which are being carried out with the help of police, do not have any court order.
So far, 14 primary schools, 20 churches and eight private health units have been demolished by the company, according to residents.
However, Mr Wycliffe Birungi, a lawyer for Great Season, said they followed “the right procedures” in acquiring their two-square mile farmland.
“For us, we acquired land from people. The acquisition was done two years back and we have been already in business. It as a fully-pledged commercial farm venture but we have neighbours – there is a big farm called Agilis, there is also some other big farm,” he told Daily Monitor on phone yesterday.
Daily Monitor was unable to speak to officials from the two other companies.
Witness Radio, an NGO, noted that the negative consequences of Kiryandongo land giveaway include; “forced evictions, human rights violations, lost livelihoods, broken families, rising food insecurity and, ultimately, increased poverty.”
Mr Geoffrey Wokulira, executive director of Witness Radio, said that children caught up in the fracas are no longer going to school.
“Hundreds of young girls are engaged in early marriages because ideally they have no future and there is no responsibility these companies are showing,” he said.
Mr Wokulira said 19 people have been arrested by police in an attempt to weaken, intimidate and cause fear among the evicted residents.
But the RDC denied violation of human rights during eviction.
“People here are very quick in doing wrong and when we swing into action, they begin making wrong accusations,” he said.

What government says
Mr Debele also accused the residents of trying to attack security operatives because “they don’t want to move and yet there is a presidential order on that matter.”
He added: “So, you even find a situation where some of them, empty-handed or with pangas, they want to go and attack armed men who are officially on duty. What do you do with such a person?”
Mr Joseph Bakaleke Gwaido, the district police commander, described the allegations labelled against the police as an insult. “….a question where somebody asked that the security organs engaged in the abuse of human rights of individuals is an insult. … This is the most difficult society I have served,” Mr Bakaleke said. “Down there in the ranches, we have people who belong to all the ranches and they are being compensated,” he added.
Efforts to get a comment from State minister for Agriculture Aggrey Bagiire were fruitless as his known phone numbers were unavailable by press time.  Ms Judith Nabakooba, the minister of Information, Communication Technology and National Guidance, neither answered our repeated calls nor replied our text message to her mobile number.

Land challenges
The Land Act 1998 recognises four categories of land tenure systems, including customary, freehold, mailo and leasehold. It states that all Uganda citizens owning land under customary tenure may acquire a certificate of ownership in a manner prescribed by Parliament. Judicial officers have proposed that soldiers be barred from carrying out evictions in the country. They also recommend that the role of police should be limited to observing evictions in addition to keeping law and order during lawful evictions.