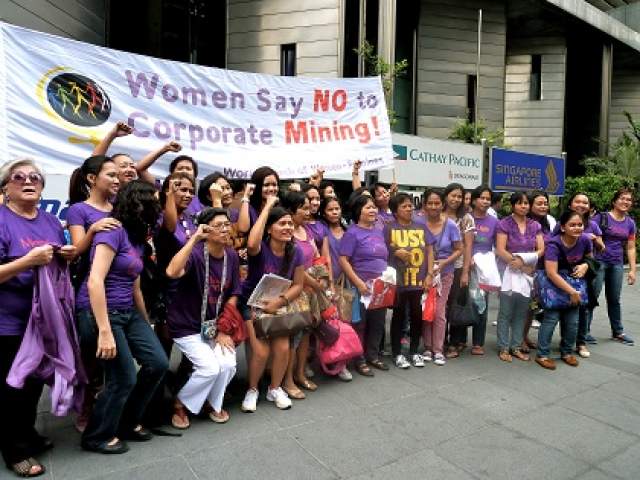 An event in London this evening promoting women in the mining sector is being challenged by organisations and individuals highlighting inspirational women from around the world who are engaged in resisting the ecological and social devastation caused by mining projects. The event is part of the annual “Mines and Money” conference held in London.

Members of London Mining Network (LMN), led by women from LMN member group the Gaia Foundation, will hold a vigil from 6pm to 7.30pm outside the champagne reception at the Business Design Centre in Islington, bearing placards featuring the names and faces of women guardians of the land from around the world, while a statement from the international Women And Mining Network (RIMM from its Spanish initials) will be read outside and then handed in to the organisers of the Women in Mining event.

The statement says that:

“We wish to expose the glaring contradiction between this form of tokenism towards gender equality, where the industry glorifies a few women working within the sector while it displaces millions of women from our homes, from our ancestral lands and properties, and makes us impoverished.”

Among the women activists celebrated by the placards to be displayed are:

1.The Makhadzi of Venda, South Africa, are guardians of a network of sacred sites whose health determines that of an entire ecosystem and the community. They are opposing CoAL of Africa’s plans to mine coal in their territory in a series of projects that would decimate water sources, the entire ecosystem and their traditional agricultural livelihoods. As they say, “ No water, No Life!”

2. Women in Doima village, Piedras, Colombia, have been at the forefront of the communities’ opposition to La Colosa mine and the tailings dam threatening their land and livelihoods. Rallying to blockade bridges and create a unified and pacifistic resistance movement, they have risen to protect the heart of the Cordillera, as guardians of the land.

3. A community educator in the National Association of Professional Environmentalists’ Sustainability School (Uganda), Alice Kazimura has been educating and supporting communities to protect their territory from land grabbing in the oil rich Buliisa district. In 2010 she was instrumental in preventing Tullow Oil Plc from taking community land in Kakindo: “We shall not sleep until Tullow backs off from our land. If it means going to the streets we shall go.”

“We are standing in solidarity with women around the world who are courageously opposing destructive mining projects. It is wrong that their efforts to protect life should go unrecognised whilst those within the industry are celebrated. We are holding this vigil to mourn and bear witness to the violations of our planet by aggressive mining companies, and to stand together as women for the protection and dignity of Life.”

“This project is focusing on the career successes of small numbers of women within the male-dominated mining industry, while obscuring the realities of women around the world resisting the havoc brought to their communities by destructive mining developments.”

“In Latin America women play a significant role in opposing destructive mining. Although these women are invisible to the industry, they are women who have lost their land and have been evicted and disregarded because they are women. Their children are ill with high levels of lead and other toxins in their blood, they have lost a relatives due to violent repression during peaceful protests or as a result of the mining conflict which is tearing apart families and communities. These women are not concerned with jobs; they are concerned about their survival and their capacity to endure more mining violence.”

The full text of the RIMM statement can be found on London Mining Network's website.