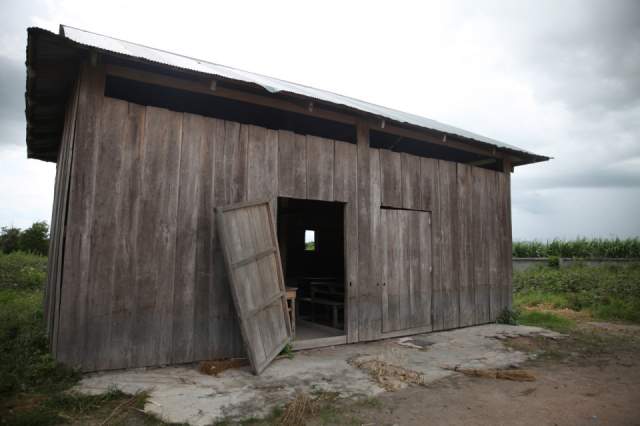 The sugar company that took over the villagers' land and farms built a school for the children, but locals say it has not been used as a school for months. There were no students or teachers the afternoon this picture was taken on Aug. 28, 2013 (Photo: Thomson Reuters Foundation / Thin Lei Win)

While reporting in Kampong Speu province in Cambodia, I visited a one-room wooden hut on stilts, with thatch walls barely covering three sides of the structure. It was bare save a couple of bamboo mats, two framed photos and some belongings in the corner. Three generations call it home.

The matriarch of the household is a 55-year-old grandmother. Until the sugar company turned up, she said she didn’t need to work because they had enough to eat. Her children make charcoal and she would sometimes forage in the nearby forest.

“There used to be all kinds of trees around here but not now. The company took them all,” she said.

“The company” she refers to is the Phnom Penh Sugar Company, owned by Ly Yong Phat, a powerful senator with the ruling Cambodian People’s Party (CPP). Their house now sits at the edge of the sugarcane plantation, which plowed over farmland belonging to around 1,000 families as well as 2,000 hectares of community forest.

Since the company came to town, the farms, forests and charcoal business are gone, and grandmother - who, like her neighbours, was once self-sufficient - has no other means of survival. It is a development problem that has popped up again and again in Cambodia and other parts of the world, activists say.

Now the villagers are all at the mercy of “The Company” who they say is an uncaring employer that has brought them food insecurity and worse living conditions.

Grandmother had to find a job, at which she earns around $3 a day.

“The only hope for many here is to work for the company but one day’s absence could ruin your family,” she told me, sitting on a log outside her home. “It seems like you don’t even have the right to get sick. Sometimes I have fainted in the plantation while working, but what else can I do?”

She looked across at her grandson who was sitting on his mother’s lap.

“I have no idea what I’m going to do with this boy. I don’t even know whether I can send him to school. I can barely survive on my own.”

Villagers say the nearest state hospital is miles away, and the company provides only cursory medical services.

They fret that their children are playing in the dirt instead of going to school after many days of teachers not turning up at the small wooden school the company built at the edge of the village.

Activists and rights groups say this is not a lone example. They say many similar development projects in Cambodia as well as in parts Africa have driven small-holder farmers into wage labour out of distress.

Earlier this year, the Transnational Institute policy research centre raised concerns that as Myanmar rapidly opens up its economy, acquisition of land for large-scale industrial monoculture and agribusiness ventures “is expected to become one of the biggest threats to local access to land and to people’s livelihoods” as well as a threat to peace.

The development of industrial-scale agriculture may be helping Cambodia to increase its exports and improve its economy, but the villagers I met say it provides little benefit to them. They didn’t have a say in whether a plantation should replace their farms or even where they want to be resettled.

“Everybody can agree that land grabs in the dirtiest sense is a bad thing,” said Jennifer Franco, co-coordinator of the Netherlands-based Transnational Institute’s Agrarian Justice work.

Donors, however, believe large-scale investments in agriculture - that transform what they see as unproductive areas into high-productivity, industrial agricultural zones - are necessary for development, she told Thomson Reuters Foundation.

“They seem to believe it’s a good thing for poor, rural people because it’ll inject new money into the economy, the company will offer to put up schools or health centres, it will generate more employment” and people can become wage labourers, she said.

Such a narrative is a “myth”, she said.

Activists like her question whether it’s really beneficial to the subsistence farmers - who once produced enough food for their families and sometimes had enough leftover to sell - to work for big plantations when such employment is often casual, seasonal and low-wage.

“Often the benefits are not included or the conditions of receiving those benefits are so bad that it makes it impossible for people to even avail of health or unemployment benefits,” she said.

Being a small-scale farmer isn’t easy, and you’re vulnerable to many external shocks. Yet once a business development hits home, so to speak, transitioning from farming to gainful employment in a rural community you’ve known for years is probably better than leaving and becoming a slum dweller in the city.

I don’t have all the answers, but meeting people like the grandmother and her neighbours made me wonder whether a happy medium could exist.