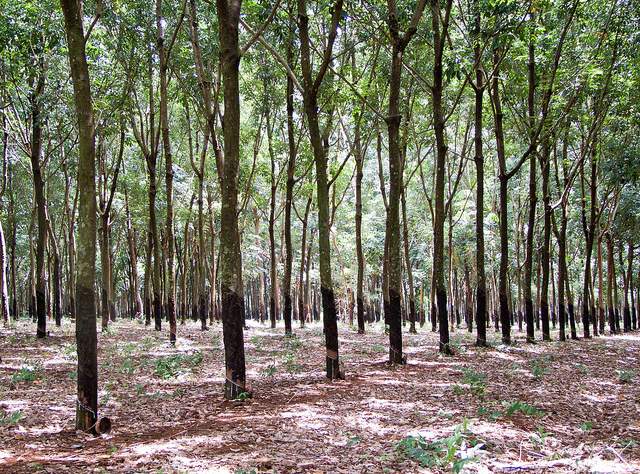 Ask Sreap Samoen where are the communal grazing lands? Where can local villagers fish and grow crops? The 50-year-old woman with a weather-beaten face points into the distance and says: “It's all gone. The company has it now.”

She's standing near a cluster of tiny shacks in Cambodia's remote north, hidden in the Dong Nai rubber plantation owned by the Vietnam Rubber Group (VRG). “Many people have lost their land,” she says before wandering off.

For more than a decade villagers have pestered and protested against Cambodia's elite over the granting of massive Economic Land Concessions (ELCs) to multinationals. NGOs and Western governments have also expressed their concerns over land and the widening wealth gap, but few listen.

Last week was no different.

It was released about the first anniversary of the death of Chhut Vuthy, a prominent environmentalist killed by security guards while investigating land grabs, and Heng Chanta, a 14-year-old girl shot dead not far from here, again by security guards during a village protest over land.

The response from Prime Minister Hun Sen was typical. He announced more rubber plantations would be grown and on a vast scale _ seemingly indifferent to the plight of hundreds of thousands of impoverished people who have lost their land or been bullied into selling at rock bottom prices.

''In the next few years, we can have more rubber than Vietnam. We dare to speak about this point as we have exchanged ideas with Vietnam, which has no land to extend,'' he said.