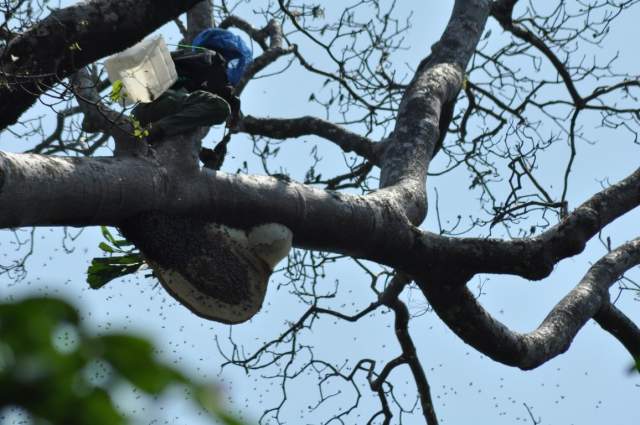 In sustainable honey production, hygiene and post-harvest processing are emphasised. The harvested combs containing honey are placed in a sterilized jerry can and the draining process involves workers who wear protective clothing, masks and head covering. (

Honey is a forest commodity that offers many benefits. The thick, golden-brown liquid is produced by the honey bee (Apis dorsata) from nectar collected from various plants. Aside from being consumed directly, honey is also mixed with other foods, drinks and even soap. Moreover, beehives produce not only honey but also beeswax, which is used in the beauty and medical industries.

In several areas in Indonesia honey is a major commodity that contributes to improving communities’ economies. Honey is also a part of a community’s cultural identity, for example, many indigenous communities preserve their forests for sustainable honey production.

The upstream area of Konaweha, Southeast Sulawesi, is a well-known forest honey production site. During the harvest seasons—usually November–January and April–May—thousands of kilograms of honey are brought out of the forests. The honey-producing sites in Konaweha include Ueesi and Uluiwoi sub-districts in East Kolaka district and Latoma, Asinua and Abuki in Konawe district.

In these areas, honey is still processed traditionally by groups of honey hunters, called ‘pasoema’. Pasoema usually consist of 3–4  people. They go into the forests, identify the trees where beehives are located and mark them so they won’t be claimed by other pasoema. Subsequently, to oust the bees they smoke the hive by burning palm leaves tied in a tube-like bamboo stick. When the bees depart, a member of the pasoema climbs the tree to the hive. He squeezes it to extract the honey, placing the liquid in recycled plastic bottles, ready for sale.

From this description, it should be clear that the commonly practised traditional method doesn’t place much importance on hygiene and sustainability, which affects the honey quality and continuity of the honey bee habitat. In contrast with the traditional technique, sustainable and hygienic honey-production emphasizes preserving the honey bee and its habitat and the post-harvesting process takes cleanliness into account. In this method, preserving the bee is ensured through conserving trees; not only those that harbour hives but also the surrounding trees because they provide protection and are food sources.

Aside from that, while the traditional method will see the harvest of whole hives, the sustainable method only takes the combs that contain honey. Harvesting the whole hive means that the honeycombs that house the ‘brood’ (eggs, larvae, pupae) are also taken, which restricts or even destroys the reproductive capacity of the hive. Further, to extract the honey the hives are squeezed, which kills the larvae. Taking only the combs that contain honey means maintaining the colony’s life cycle; the bees will require less time to rebuild their hive than if the entire hive was taken. A faster rebuild means a shorter harvesting period, which benefits the pasoema. By way of comparison, it takes 8–10 months for bees to build a whole hive but only 3–5 months to rebuild.

In sustainable honey production, hygiene and post-harvest processing are emphasised. The harvested combs containing honey are placed in a sterilized jerry can and the draining process involves workers who wear protective clothing, masks and head covering. In addition, cutting the honeycomb is done with stainless steel blades and draining with nylon filters and clean funnels. The honey is put in a tightly closed jerry can and placed in dark surroundings separate from fertilizers, gasoline and other contaminants.

By applying the sustainable method, the honey achieves a higher selling price. At the moment, Ueesi Forest Honey Network, a pasoema association from Ueesi sub-district, Southeast Sulawesi, which is also a member of the Indonesian Forest Honey Network, buys honey from local pasoema at IDR 44 000–55 000/kilogram. This price is much higher than squeezed honey at IDR 20 000–30 000/kilogram. Furthermore, with proper storage, drained honey can last up to 8 years without reducing its quality, while squeezed honey only lasts for 2 years.

According to Nasrudin, the leader of the Ueesi Forest Honey Network, not all forest honey from the combs can be drained. Some can only be squeezed. Moreover, he noted that some consumers still prefer squeezed honey. Therefore, although the network has been promoting drained honey, they still produce squeezed honey but are gradually reducing its quantity. This is a transitional step before the network fully focuses on producing only drained honey.

Considering the hefty benefits of sustainable honey production, AgFor Sulawesi will share information about it to communities so they will all be able to adopt the method. In order to do so, the governance team of AgFor is helping pasoema in Tawanga, Undolo, Lalombai and Sanggona villages in Uluiwoi sub-district, East Kolaka district, adopt the sustainable method. As a first step, in November 2013, AgFor held a training session on sustainable honey harvesting followed by marketing and entrepreneurship training in February 2014. In collaboration with local partners, Komunitas Teras and Yascita, AgFor will conduct participatory rapid market assessment, training in development of derivative products, build pasoema’s institutional capacity and marketing networks and hold meetings at district and provincial levels to encourage policies that will reinforce upstream Konaweha as a centre of forest honey production in Southeast Sulawesi.