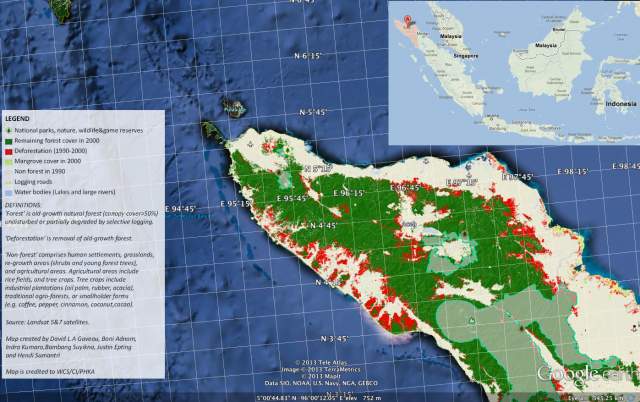 The governor of Indonesia's Aceh Province on the island of Sumatra has proposed opening up more than 50,000 hectares of protected forest to logging, according to a new analysis by an Indonesian environmental group.

The report, published by Greenomics-Indonesia, is based on analysis of data in a new spatial plan proposed for Aceh. The spatial plan, which lays out the zoning regulations at the provincial level, must be approved by the central government to move forward.

Greenomics found that the proposed spatial plan changes the designation of several large blocks of “protected forest” to “production forest”. The move would effectively rezone these conservation areas for logging concessions. The report did not evaluate the impacts of the proposed changes on blocks of forest under 1,400 hectares, but media reports indicate that other areas may be opening up for mining.

“If the Governor is sincere about protecting the province’s forests, then he will withdraw his destructive proposals immediately,” said Greenomics Executive Director Elfian Effendi.

“Seven of the eight protection forest blocks are dominated by elephant and orangutan habitats,” he added via email.

Aceh has the highest proportion and extent of forest cover of any province in Sumatra. Aceh's forests benefitted from a long-running insurgency by the Free Aceh Movement (Gerakan Aceh Merdeka - GAM) against Indonesia's central government. Among GAM's chief grievances was natural resource extraction by outsiders.