Resurgence of indigenous identity in the crossfire in Brazil 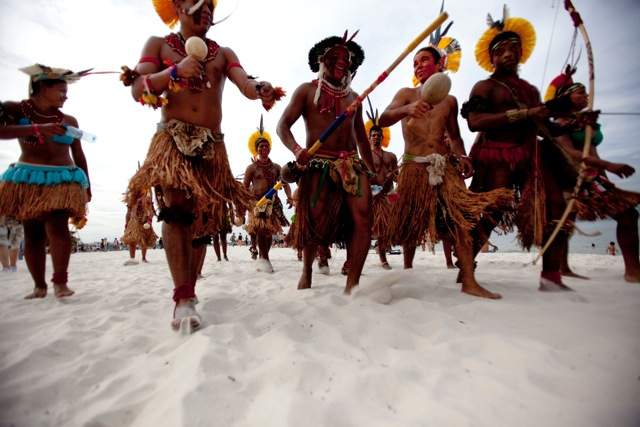 The powerful tractors and other farm machinery that landowners recently used to block roads at a dozen points from north to south in Brazil illustrated the economic clout of big agriculture, which rose up against the demarcation of indigenous reserves.

The presence of lawmakers in the protests also indicated the growing political influence of the “ruralistas” – the bloc of large landowners in the Brazilian Congress that frequently deals blows to the left-leaning government of Dilma Rousseff, which nominally holds a broad majority in the legislature.

The “national strike” organised Friday Jun. 14 by the Agricultural Parliamentary Front mobilised a few thousands of farmers in some places and a few hundred in others. But the protests and roadblocks were only part of an ongoing offensive by landowners and agribusiness against the creation of new indigenous territories and the expansion of existing ones.

The main objective of the ruralistas is to modify the 1988 constitution, which guarantees indigenous groups the exclusive right to land that they have traditionally lived on, and a large enough area to provide for their “physical and cultural” survival.

In 2012, the rural bloc managed to get the country’s forest code overhauled, to their own benefit and at the expense of the environment.

Other measures that they are demanding, like the participation of the ministries of agriculture and agrarian development, and agricultural research centres, in the process of demarcation of native lands, are aimed at hindering the recognition of new indigenous reserves.

The ruralistas represent “a major step backwards,” said Marcos Terena, an official at the government’s indigenous affairs agency, FUNAI, and a veteran activist for native rights.

The ruralistas see it as a dispute over land ownership, said Marcio Santilli, an expert with the non-governmental Socioenvironmental Institute and a former head of FUNAI. According to him, the landowners want to expand agribusiness as usual, taking over public lands, whether they are unoccupied or form part of indigenous or nature reserves.

Areas that have officially been recognised as traditional indigenous territory often contain pockets of private property, which are illegal and are subject to expropriation to incorporate them as part of the reserve.

Santilli said the landowners are trying to depict such situations as mere conflicts over land.

A number of such private properties were illegally acquired. But in the western state of Mato Grosso do Sul, many landowners have valid title deeds, granted by previous governments. In that area, a large number of conflicts over land have dragged on for decades, and many have become violent.

The ranching and soy-growing state accounted for 57 percent of the 560 murders of indigenous people documented between 2003 and 2012 in Brazil, according to the Indigenous Missionary Council (CIMI), linked to the Catholic Church.

Although not all of the killings were over land disputes, the number of murders of indigenous people in such conflicts reflects the asymmetry in the clash between the ruralistas and Amerindians.

The 2010 census counted nearly 900,000 indigenous people in this country of 198 million – three times the number found in 1991, when the category of native people was incorporated into the census, for people to self-identify their ethnic origin.

The recognition of the rights of ethnic minorities in the 1988 constitution helped boost the sense of indigenous identity, leading to more people identifying themselves as native people, even outside of their home villages and reserves.

Of the nearly 900,000 people who identified themselves as indigenous in the 2010 census, 36 percent lived in towns and cities. There are large native communities in some cities, such as Campo Grande, the capital of Mato Grosso do Sul.

The resurgence of indigenous identity and cultures also helped lead to advances in education among indigenous people, including the rescue of native languages and the incorporation of new technologies.

Terena, the FUNAI official, predicted that within about a decade, “a new factor” would give a boost to development in indigenous communities and their relations with mainstream society: “indigenous doctors” who are now being trained in the country’s universities “without losing their own cultures,” especially in southern Brazil, he said.

This phenomenon has represented a reverse in Brazil’s history of ethnocide since the arrival of the Portuguese colonisers in 1500, when there were an estimated five million indigenous people in the territory that is now Brazil. But it is now facing new threats.

Besides the ruralistas, which are seeking to tie the hands of the institutions that have fomented the resurgence of indigenous identity, major infrastructure projects in the Amazon jungle are modifying the living conditions and territories of indigenous communities.

Plans for the construction of dozens of hydroelectric dams on rivers in the Amazon basin have led to growing tension and battles between indigenous communities, dam-building companies and the government.

Police repression has been stepped up as indigenous activists have repeatedly invaded the Belo Monte hydropower plant under construction on the Xingu river, a major tributary of the Amazon river, in the northern state of Pará.

An indigenous protester, Oziel Gabriel, died during a May 30 police operation in the town of Sidrolandia in Mato Grosso do Sul.

He was apparently killed by a police bullet during a court-ordered eviction of hundreds of indigenous people who had occupied part of a large landed estate officially identified as part of the traditional territory of the Terena people 13 years ago.

The demarcation of the territory has been delayed by lawsuits, legal rulings and difficulties in indemnifying the owner of the land. The correlation of forces and the government’s strong emphasis on economic development are totally negative for indigenous people. But in their favour are the constitution, international conventions and international public opinion that defends diversity and native rights.

With the awareness and values that have been built up, “Brazilian society today would not allow the country to move backwards in terms of rights enshrined in the constitution,” said Paulo Maldos, head of the National Secretariat for Social Articulation in the Brazilian presidency, whose work has taken him into dangerous negotiations with indigenous groups that have occupied land.

Negative repercussions have discouraged anti-indigenous actions. Every indigenous person who is killed, like Gabriel, becomes a martyr and strengthens the resolve of the communities. For that reason this latest death might moderate the ruralista offensive against indigenous territories.

According to FUNAI, there are more than 450 indigenous territories in Brazil in the process of being demarcated, covering more than 100,000 hectares, while another one hundred or so are in the initial stage of being identified.