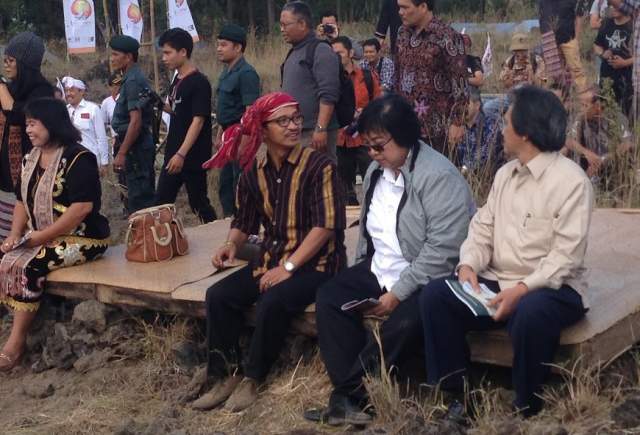 Last Sunday on the Indonesian island of Bali, the country’s environment and forestry minister had the uncomfortable task of telling hundreds of indigenous people something they did not want to hear: a promised task force on their rights was not yet ready for action.

Many of those present on the opening night of the Nusantara Festival, an annual cultural event, including Abdon Nababan, secretary-general of the Indigenous Peoples Alliance of the Archipelago (AMAN), had expected the minister’s speech to double as the landmark policy announcement they’d been pushing for. President Joko “Jokowi” Widodo had suggested as much at a meeting with AMAN in June, according to the organization.

Instead, they got appeals for trust and patience.

“More time will be required to harmonize the task force proposal with other ministries,” said the minister, Siti Nurbaya. “But don’t think there is a lack of political will.”

The apparent delay is emblematic of an administration undermined by divisions deep enough that a major cabinet reshuffle was needed less than a year into Jokowi’s presidency. Now, indigenous leaders are wondering if Jokowi has the muscle to make good on this and other proposals related to their cause.

“I expected the task force to be announced today,” Abdon told mongabay.com after Siti’s speech. “I have to say I’m surprised.” 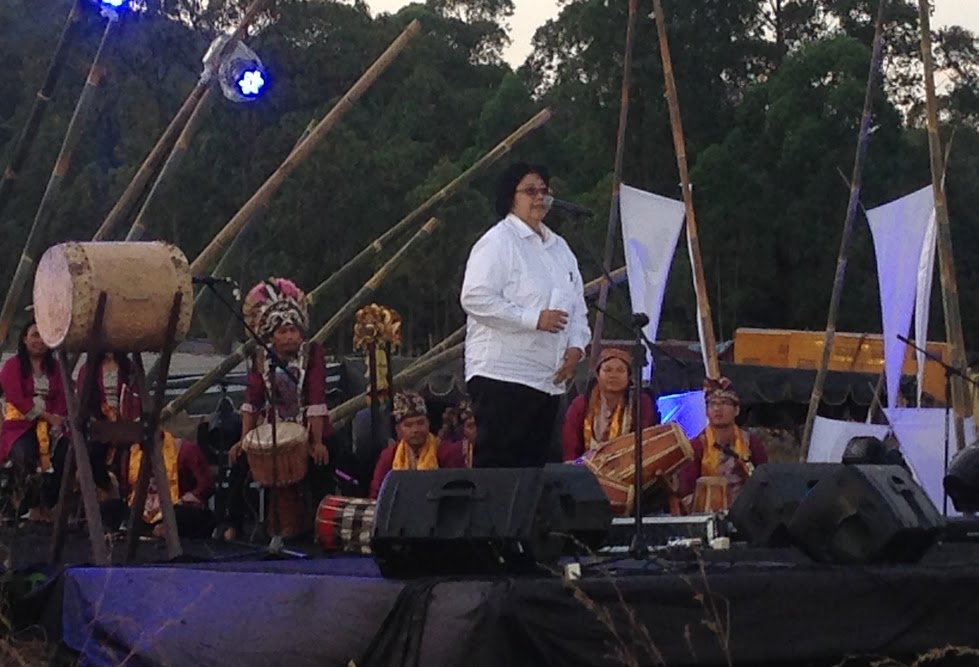 Siti Nurbaya, the Indonesian environment and forestry minister, delivers a speech to officially open the Nusantara Festival in Bali on Sunday. Hopes she would use the occasion to announce the formation of a long-awaited task force on indigenous rights were not realized. (Photo: Cory Rogers / Mongabay).

According to Rukka Sombolinggi, AMAN’s deputy secretary-general, at the meeting with Jokowi in June, “He admitted that indigenous peoples had been ‘conquered’ by the legal system.”

The now-delayed task force, she said, had been formulated with that and two other things in mind. Firstly, the redress of 166 cases of suspected misfeasance. At the meeting with Jokowi, AMAN gave the president a list of as many names of indigenous citizens it said had been unfairly prosecuted by the law for resisting unwanted development projects.

Some of those 166 people have already been convicted of a crime. For others, the legal process is ongoing. The task force would recommend pardons for imprisoned individuals it deems have been wrongfully convicted. Other forms of presidential intervention would be recommended for those it decides have been inordinately targeted by the police. Findings from the National Human Rights Commission’s recently concluded national inquiry into land conflicts affecting indigenous peoples would provide a reference.

Secondly, the task force would sketch out the contours of a permanent commission on indigenous rights, one that would operate similar to how bodies like the National Commission on Violence Against Women defends women’s rights, Rukka said.

Finally, on the legal front, the task force would work with the House of Representatives to get a long-awaited draft bill on indigenous rights passed into law.

The draft bill, which has languished in the House since 2012, is needed to translate the constitutional rights of indigenous citizens into an active and comprehensive set of regulations. That would be achieved by creating verification systems for defining indigenous groups and for demarcating their territory, and by creating a procedure for settling land disputes, among other tasks.

The presidential mandate to push for the bill is the key, Rukka said.

“The bill should have been moved through during the [Susilo Bambang Yudhoyono] administration, but there was no government support, only parliamentary support,” Rukka explained, referring to Jokowi’s predecessor. “That’s where we fell short.”

UN Special Rapporteur on Indigenous Rights Victoria Tauli-Corpuz said engaging lawmakers would continue to be important, as collaboration between the two branches was needed to bring any law into being.

“If the president supports the law, of course there will be a greater chance of it being realized,” she told mongabay.com. “But even if the president doesn’t back it up, if the members of congress are strong [it has a chance to get passed].”

The lingering need to “harmonize” the task force with the relevant ministries speaks to both Jokowi’s pluck and pusillanimity as a leader.

On the one hand, said Mina Setra, another AMAN deputy, what Jokowi has done with Siti’s ministry — the Forestry Ministry consistently ranked as one of Indonesia’s most corrupt institutions before Jokowi merged it with the Environment Ministry — by installing her, a reform-minded bureaucrat, as its chief, has gone a long way in transforming an erstwhile foe into a promising partner.

“Before, our strategy for indigenous rights was to isolate the Forestry Ministry, to push them,” Mina explained. “Now it is one of the friendliest ministries.”

Indeed, it was the Forestry Ministry that analysts say singlehandedly obstructed the passage of the draft bill on indigenous rights during Yudhoyono’s second term by failing to attend key deliberations on the bill.

Wiratno, the Environment and Forestry Ministry’s new director-general of social forestry, confirmed that the institution was in a process of deep reform.

“We’ve never had this spirit of reforming the bureaucracy before,” he said on the festival sidelines. “A spirit of togetherness has truly been opened.” 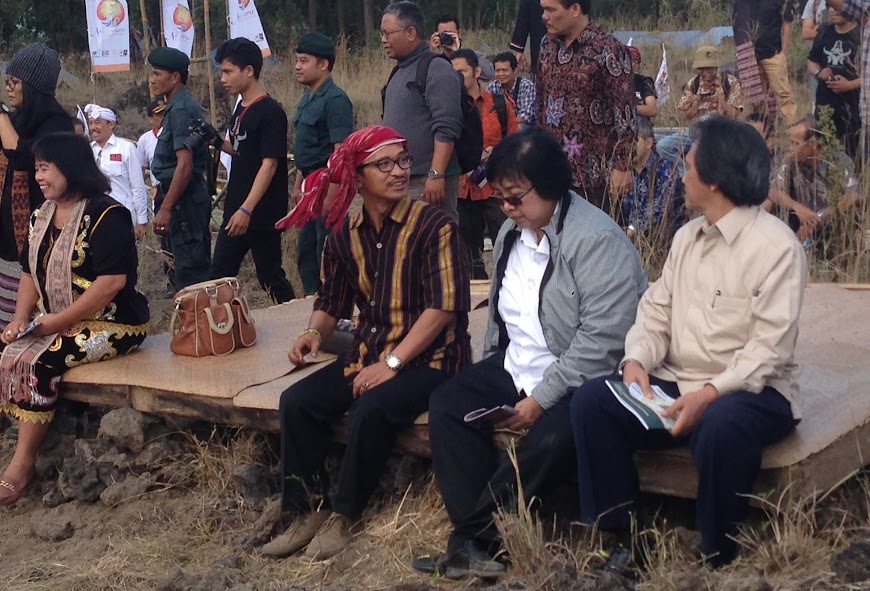 On the other hand, the AMAN side contends, Jokowi’s inability to bring some of his other ministers into line is a reason to question his temerity. Despite Siti’s assurances that the government was fully behind the formation of the task force, the indigenous campaigners blame other elements in Jokowi’s administration for scuppering its finalization.

According to Abdon, both the Foreign Affairs Ministry and the Agrarian Affairs and Spatial Planning Ministry have held perspectives at odds with such a body. The latter ministry, he said, is loathe to see its zoning powers challenged by customary land claims, while the former fears initiatives legitimizing the term “indigenous” could act as fodder for separatist movements, stirring up restive areas like easternmost Papua and West Papua provinces.

As to the latter concern, Abdon said such logic was fatally flawed.

“Papua’s [independence movement] will generate more momentum as an international cause if [local citizens’] rights aren’t recognized and you don’t have a growing sense of justice,” he said.

There are serious challenges in terminology as well. Mina said that despite Indonesia’s adoption of the UN Declaration on the Rights of Indigenous Peoples seven years ago, the meaning of the term “indigenous” was still contested by the government.

“The Foreign Affairs Ministry always says either ‘there no indigenous persons in Indonesia’ or ‘we are all indigenous persons’,” Mina said, adding that in international forums, the Indonesian “masyarakat adat” — masyarakat in this context means “peoples,” and adat refers holistically to indigenous or customary peoples’ various life systems — was the preferred term among Indonesian diplomats.

Legal experts say making “masyarakat adat” the legal basis for legislation on indigenous rights could deprive millions of Indonesians of those rights, depending on how broadly or narrowly the term was defined in law. The prospect of a narrow definition would have powerful wind at its back, as it could lead to the freeing up millions of hectares of contested land for exploitation.

Tauli-Corpuz, the the UN special rapporteur, said the most important thing is for government to get on board with the law recognizing indigenous peoples’ constitutional rights.

“I’d like to plead to the Indonesian government that such a regulation will emerge within this current regime,” she said.

Abdon, calling the task force a crucial “bridge to reconciliation between indigenous peoples and the state,” also reckons time is of the essence.

“If these issues (of ‘harmonization’) aren’t worked out sometime this month, it’s really not a good sign for us,” he said.