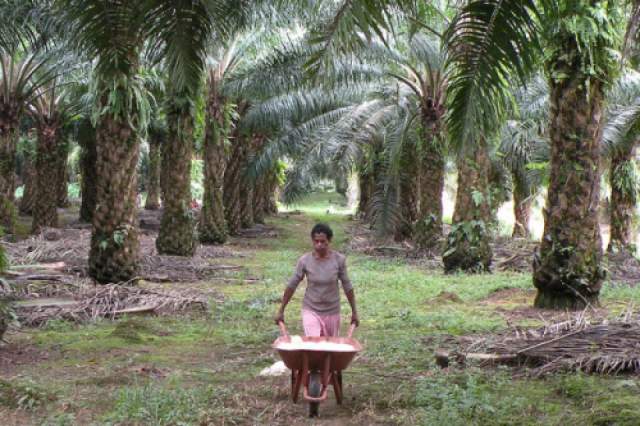 A worker pushing a wheelbarrow full of fertilizer at an oil palm plantation in Papua, Indonesia. (Photo: CIFOR / Agus Andrianto)

Indonesia may miss out on a chance to boost socio-economic benefits for the poor in the eastern province of Papua unless it creates a development plan to address disparities caused by the rapid increase in oil palm plantation investments, according to a new report.

Oil palm production is considered a means to stimulate the economy, reduce poverty and improve livelihoods through related job creation and wage hikes — but without well-planned integration policies, key industry players will remain the biggest beneficiaries, the report said.

“Frontier oil palm expansion should be undertaken in stages to ensure the needs of the poor are considered,” said Krystof Obidzinski, a senior scientist with the Center for International Forestry Research (CIFOR).

Indonesia is the world’s largest producer of crude palm oil (CPO), accounting for 45 percent of global output, the report said. In 2012, Indonesian CPO generated almost $18 billion in revenue from exports and $2.8 billion in export tax, according to Bank Indonesia, the country’s central bank.

Not only does oil palm contribute to infrastructure development, but it is also considered significant for poverty alleviation in Indonesia, a country where about 30 million people — 15 percent of the country’s population — live below the poverty line, Obidzinski said.

The government plans to double oil palm plantation estates by 4 million hectares (ha) over the next 10 years, he said, adding that Papua is targeted for much of this expansion due to limited land availability in other key palm oil plantation areas on the islands of Kalimantan and Sumatra.

As part of its development efforts on the Papua frontier, the government in 2010 set up the public-private Merauke Integrated Food and Energy Estate (MIFEE) initiative, aimed at expanding economic developmentby cultivating food and energy on a 1.2 million ha site — reduced from 2 million ha after controversy over potential social conflict and environmental damage.

Researchers used a mathematical equation to evaluate government estimates of the amount oil palm will contribute to the Papua economy, the potential for related job creation and projected income levels from such jobs. The results show that the bulk of increased economic output in the region would benefit the oil palm sector, rather than trickling down into other sectors and stimulating growth.

Calculations show that due to a lack of experience working in the oil palm sector and due to conflict over land rights, local Papuans would be unlikely to benefit from the government’s projected employment opportunities, leading to an increase in migrant workers.

“Depending on the plantation development scenario, our analysis shows that from 10,000 to more than 1 million jobs could be created,” Obidzinski said. “Unfortunately, most jobs on oil palm plantations require unskilled labor, and wages for such work wouldn’t do much to improve the earnings in low-income households.”

The potential for conflict in the province could increase with the introduction of foreign workers and due to disputes over land tenure rights, he said.

“Investors usually believe a one-off payment means they’ve purchased the land, but Papuans don’t realize that — they often believe their land has been rented, not sold and that they should receive compensation at regular intervals,” he said.

Oil palm plantations have led to vast deforestation — up to 50 percent of the 8 million ha of productive plantations in Sumatra and Kalimantan are situated on deforested land, according to Obidzinski.

“The government should commit to ensuring frontier expansion in Papua is sustainable — non-forest land should be used for oil palm plantation estates to ensure a low carbon footprint,” Obidzinski said.

This work forms part of the CGIAR Research Program on Forests, Trees and Agroforestry and is funded in part by U.S. Agency for International Development and the Catholic Organisation for Relief and Development Aid.

For more information on the topics discussed in this article, please contact Krystof Obidzinski at k.obidzinski@cgiar.org