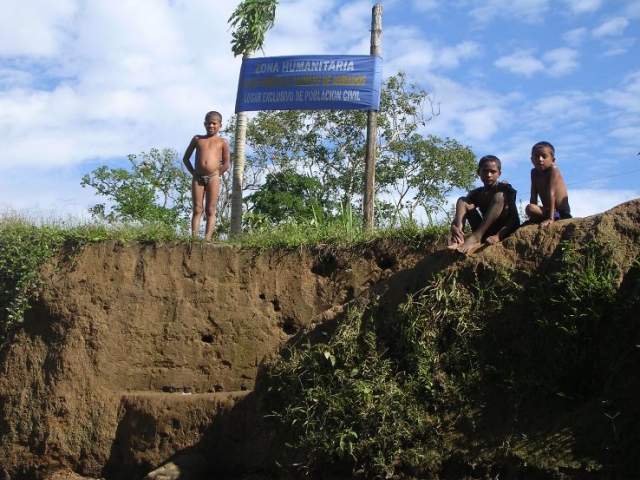 Mega-projects and agro-business have been significant factors contributing to forced displacement in Colombia over the last couple of decades. This is particularly evident in the case of Curvaradó and Jiguamiandó, where communities were forcibly displaced by armed groups in order to make way for huge plantations of African palm. African palm oil is used in Europe in many products, including food, cosmetics and biodiesel.

Due to the tireless work of the Inter-Church Commision for Justice and Peace (Comisión Intereclesial de Justicia y Paz - CIJP) and the courage of the communities that they represent, some of the palm cultivators who directly benefited from the human rights violations and the terror that caused the forced displacement in the Chocó area are now being brought to justice. [1]

In July 2013 Luis Fernando Zea Medina and Héctor Duque Echeverry were sentenced to over ten years in jail for the crimes of conspiracy, forced displacement, and the invasion of ecologically important land through the removal of the communities of the collective territory of Curvaradó and Jiguamiandó (download their full sentence here). [2]

The sentence recognises the alliances between paramilitaries and businesses which allowed thousands of hectares of land in the Curvaradó and Jiguamiandó river basin to be illegally seized, and which led to the displacement of the legitimate and ancestral owners of this land.

This decision follows the sentence in September 2012 of Rodrigo Alberto Zapata Sierra to ten years in jail for the same crimes as the two businessmen sentenced in August 2013. Rodrigo Zapata was part of a paramilitary group run by Vicente Castaño, which used this seized land for an agro-industrial mega-project growing palm oil. [3]

Complicity between paramilitaries, businessmen and security forces in Colombia has caused massive human rights violations of communities. According to ex-paramilitaries, Rodrigo Zapata was responsible for legalising land through agreements with officials from INCORA (Colombian Institute of Agrarian Reform). It is alleged that Zapata’s contacts went as high as officials in the Uribe government, he participated in the visit to the Casa de Nariño by paramilitary delegates in 2008, and engineered the now notorious meeting between the paramilitary Antonio López, alias ‘Job’, and the press and judicial secretaries of then president Uribe. [4]

This sentence reveals the ties between state agents - who were participants in these illegal dealings but have not yet been sentenced - and the paramilitaries and businessmen responsible for carrying out the palm oil projects.

Bringing the Curvaradó palm cultivators to justice was something that President Santos promised ABColombia he would follow up on at a meeting during his visit to the UK in November 2011, when he also made a joint declaration on human rights with the UK Government. In 2011, 15 palm companies/ cattle ranchers from this region were formally charged for active participation with paramilitaries, although many of these are still awaiting trial. In addition, there are over 50 cases pending that CIJP have requested be investigated together in order that the truth of what happened in Curvaradó and Jiguamiandó can be revealed. The victims need to know not only those responsible for the crimes, but also those who ordered the crimes, and Colombian Society need to know why. ABColombia would like to reiterate the need to bring all these cases to justice.

• Watch PBI’s video about the forced displacement of communities in Chocó including Curvaradó and Jiguamiandó (also available in Spanish):

• Read this report by the Internal Displacement Monitoring Centre on humanitarian zones in Northwest Colombia: 'Resisting Displacement by Combatants and Developers'.

• The chapter in ABColombia’s report 'Returning Land to Colombia's Victims' (June 2011) on the economic interests behind land theft provides a background to these events.