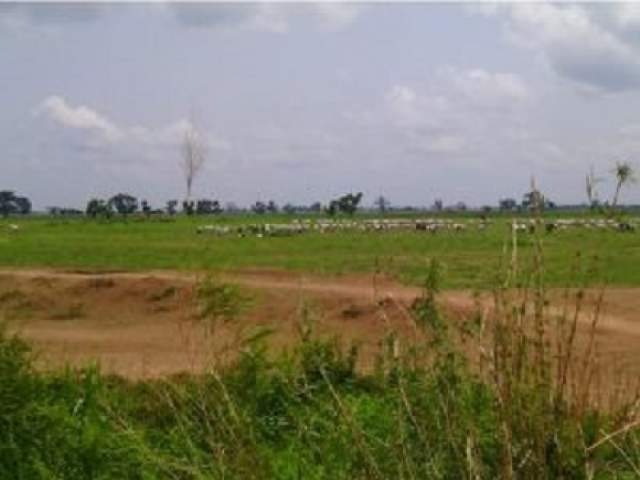 Development secretary Justine Greening is facing questions over UK involvement in a massive land-grab in Nigeria that is evicting local farmers from 300 square kilometres of fertile farmland to clear the way for a rice farm owned and controlled from the US and Canada. A 45,000-strong community faces landlessness and destitution.

Farmers in Nigeria's north eastern state of Taraba are being forced off lands they have farmed for generations to make way for US company Dominion Farms to establish a 300 square kilometre rice plantation.

The Dominion Farms project forms part of the UK-backed New Alliance for Food Security and Nutrition in Africa and the Nigerian government's Agricultural Transformation Agenda.

Both initiatives are ostensibly intended to enhance food security and livelihoods for small farmers in Nigeria. But a new report published today 'The Dominion Farms land grab in Nigeria', finds that the Dominion Farms project is having the opposite effect.

In fact, the lands provided to Dominion Farms are part of a public irrigation scheme that 45,000 people depend on for their food needs and livelihoods.

Diane Abbott MP has written to the Development Secretary Justine Greening to ask questions about the involvement of the New Alliance in the Dominion land grab, and is awaiting her reply.

“Aid money should be spent supporting communities to develop sustainable agriculture rather than supporting initiatives which are enabling companies to evict those communities”, commented Heidi Chow, food sovereignty campaigner from Global Justice Now.

“Initiatives like the New Alliance seem to be more about providing opportunities for agribusiness to carve up the resources of African countries rather than trying to address poverty or hunger.”

Farmers are unanimous - this is our land!

“The local people are united in their opposition to the Dominion Farms project”, says Raymond Enoch, an author of the report and director of the Center for Environmental Education and Development in Nigeria. “They want their lands back so that they can continue to produce food for their families and the people of Nigeria.”

The local people were never consulted about the Dominion Farms project and, although the company has already started to occupy the lands, they are still completely in the dark about any plans for compensation or resettlement.

“The only story we hear is that our land is taken away and will be given out”, said Rebecca Sule, one of the affected women farmers from the Gassol community in Taraba State.

“We were not involved at any level. For the sake of the future and our children, we are requesting governmental authorities to ask Dominion Farms to stay away from our land.”

Mallam Danladi K Jallo, another local farmer from Gassol, added: “Our land is very rich and good. We produce a lot of different crops here, and we farm fish and rear goats, sheep and cattle.

Under the policy, vast tracts of agricultural lands have been identified by the government for large scale projects by foreign companies - including 380 sq.km controlled by Taraba State's Upper Benue River Basin Development Authority (UBRBDA) - a government agency established in 1978 to support local farmers with irrigation schemes, flood defences, roads, stores and warehouses.

The UBRBDA lands and the Gassol Community lie on the north-eastern shoreline of the Taraba River. Some 10,000 farmers depend on these lands for their livelihoods, of which 3,000 hold land titles inherited from their ancestors who first settled there. In all some 45,000 people are sustained by the fertile farmland.

Along one side of the lands runs an 8 km long embankment that was built by UBRBDA to protect the farmlands from the river's overflow. The lands provide major ecological and hydrological functions and are a major source of livelihoods for the farmers of Gassol and other neighbouring communities.

In 2010, Dominion Farms first made its appearance in Gassol seeking the allocation of lands, water resources, fishing ponds and grazing areas used by the community for the construction of a large scale rice farm.

Two years later the company achieved its objective when it signed a memorandum of understanding (MOU) with the Taraba State government and the Nigerian government for a 300 sq.km concession on the UBRBDA lands for the creation of a large scale rice farm.

“The MOU was signed without public knowledge and the details of its contents remain unknown to the local community of Gassol and organisations that have been following the deal”, states the report.

As well as seizing the land from local farmers, it adds, the project “will also affect the pastoralists of the area by disrupting the spaces they use for livestock grazing and pastoralist routes.”

Two Nigerian NGOs, Environmental Rights Action (ERA) / Friends of the Earth Nigeria (FOEN) and Center for Environmental Education and Development (CEED) visited the area in June 2014 to find out how local Gassol farmers were affected by the Dominion Farms project.

“Consultations with the affected farmers in Gassol community revealed severe irregularities”, they found. “The farmers interviewed indicated that only the local elites and government agents were consulted, some of whom had personally endorsed the project in their community in spite of apparent widespread opposition amongst the members of the community.

Some affected farmers said that a range of promises - about adequate compensation for their lands, about the building of schools, roads, hospitals and a farm training centre, and about the employment of local people - had been made when Dominion Farms and government agencies initially visited the area. However “none of these promises have been kept.”

The MOU between the Federal Ministry of Agriculture and Rural Development, the Taraba State Government and Dominion Farms Ltd was signed “without proper consultations with the affected communities”, the investigators found.

“Those consultations that did take place involved mainly government officials. The information that local people received about the project was insufficient and was presented in a partial manner in favour of the project.

“Local farmers were never asked if they agreed to the project or under what terms they would accept the project, and were thus kept out of a decision that has major impacts on their lives.”

Farmers forced off their lands

The agreement was also signed without a social and environmental impact assessment, and did not include any resettlement plan for the farmers that would be evicted from their farms.

“Pledges that were made during the process of allocating lands to Dominion Farms to improve the livelihood of the local farmers of Gassol have so far not transpired”, the report adds. “No roads have been constructed, no hospitals, training centres or schools have been built, and locals have not been hired by the company.

“Families who have been farming and living for generations on the lands acquired by Dominion Farms are upset and disillusioned. They say the project will breach their right to adequate food and livelihoods, and their right to access the lands.

“They consider it a forced eviction without proper consultation and compensation. Several farmers said that Dominion Farms is putting undue pressure on them to leave the plots of land that they have been farming.”

Dominion Farms has already filled in ponds and water canals that local people depend on for fishing and has stationed security agents in the area to prevent farmers from accessing their lands. People have also been forced to stop grazing their goats and cows on the lands occupied by Dominion Farms.

Local peoples are also concerned that Dominion Farms is not providing the service and technical support to farmers that was formerly provided by UBRBDA and they worry that the facilities will erode if they are not properly maintained.

“They have complained to the authorities”, states the report, “but, as of yet, no action has been taken by either local, state or federal authorities.”

Dominion Farms: registered in Kenya, based in the US, controlled from Canada

Dominion Farms Limited is a company registered in Kenya, with headquarters in Oklahoma, US, that is majority owned by US-Canadian businessman Calvin Burgess as part of his 'Dominion Group of Companies'.

The company operates a controversial rice farm operation in the Yala Swamp area of Western Kenya that local farmers say has resulted in the loss of their lands and livelihoods, and grave social, environmental and health impacts on the affected communities.

Dominion's activities in Nigeria and Taraba State are relatively new. In 2012, the company began a process to establish a large rice farm project in the Northern Nigerian state of Taraba. The company signed a MOU with the Federal Government of Nigeria represented by the Federal Ministry of Agriculture and Rural Development (FMARD) and the Taraba State Government.

The Dominion Farms project in Taraba is part of the co-operation framework agreement of the G8's New Alliance for Food Security and Nutrition in Africa. Dominion Farms has signed a letter of intent between the Government of Nigeria and the G8 aid donor countries.

The letter details a $40 million investment in “growing and processing rice on 30,000 ha of land”, a 3,000 ha “nucleus farm owned by Dominion”, a rice mill and the training of Nigerian youth at Dominion’s Kenyan operations.

“In spite of the New Alliance rhetoric on tackling food security, on the ground the Dominion Farms investment has resulted in land grabbing, reducing the ability and resilience of local farmers to feed themselves and their communities”, says the report. “Ultimately, it exposes the problems of the G8's push for corporate-driven agriculture.”

Nigeria is already suffering from violent conflicts and insecurity, especially in the North. Land grabs for agribusiness projects will only make the situation worse.