Mining as a threat to the Commons: the case of South America 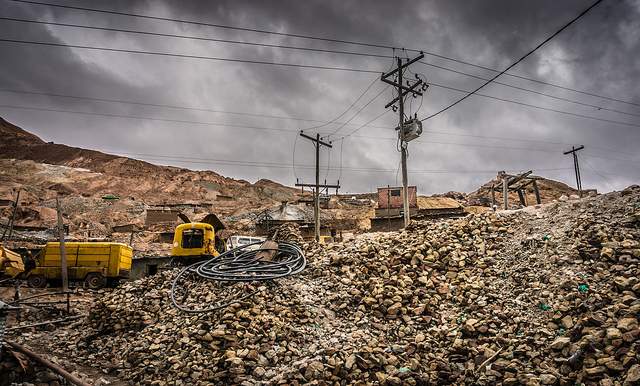 The latest cycle of mining expansion in South America dates from the mid-1990s. Since then, levels of investment in exploration and exploitation have generally held steady. Such investment has benefited from reforms in the laws governing mining in almost all countries, and the high demand for basic minerals for industrial use, especially in China and India, which have translated into high prices. The so-called “financial crisis” of the early 21st century further accelerated the rising prices of precious metals, which are now seen as a “safe-haven” value given the vulnerability of currencies. This trend has meant, in turn, an increase in the number of mining projects in the portfolios of transnational corporations and an expansion of the areas given in concession throughout the region.

The concessions granted to mining interests have soared in Peru, from 7.3 percent of the national territory in 2005 to 15.4 percent in 2009. This, in turn, has intensified socio-environmental conflicts on territories and communities. In Colombia, President Santos’s aggressive promotion of mining (“la locomotora minera”) has entailed a substantial increase in mining concessions. According to the Ministry of Mines of Colombia, more than 40 percent of the national territory is being sought for mining concessions. In Argentina, the number of mining projects increased 740 percent from 2003 to 2007 alone, reaching the considerable number of 336 projects (Swampa/Antonelli, 2010). In Ecuador, despite the mining mandate (mandato minero) that reverted mining concessions to the State during the Constituent Assembly in 2008 (Acosta 2009), there has been an increase in mining concessions, especially along the southern border with Peru.

The increase in areas given over to mining concessions in South America has involved profound disruptions of ecosystems and the communities that have depended on them for centuries. Communities have lost access to their most valued properties that they customarily shared in a sustained manner. The natural and cultural elements that have supported the communities’ development, lifestyles and systems of existence – all the components that contribute to the concept of “vivir bien” (literally, “living well”) – are under siege 1 (Choquehuanca 2010).

Water has been one of the commons goods most affected by mining in the region. Defined as a “thirsty industry” (Cereceda 2007), mining has been dispossessing the agricultural communities of their water sources. It has also diminished access to water for urban populations, especially in critical hydric zones such as northern Chile, southern Peru, and the Bolivian altiplano.2 Accordingly, one of the most important demands of the communities affected by mining is protecting the water sources for their use in agriculture and for human consumption. They also seek to keep water resources intact to conserve the ecosystems and ensure that various rituals associated with water can continue.

The most recent conflicts between communities and mining enterprises – in which the governments have not been neutral actors but rather allies of the transnationals – have been over protection of the water. The people of Islay in the Tacna region in southern Peru, worried about their access to water and its conservation, succeeded in getting the government to reject the environmental impact study submitted by Southern Copper Peru for its Tía María mining project. They understood the dangers that mining poses for human existence. For example, the Puno region in Peru was brought to a standstill for 45 days in 2011, and the border with Bolivia was shut down, because of the risks of mining contamination of the rivers that flow into Lake Titicaca.

Mining cannot be productive and sustainably managed if it ends up driving the population from its territory. Mining not only brings an end to the water, but also to the way of life tied to the land, traditions, spirituality and sense of belonging. It has recently been learned that mining by transnational companies in the high Andean glaciers along the border between Chile and Argentina is jeopardizing waters that are critical to these mountainous ecosystems.3 Fortunately, a new Argentinean law protecting the glaciers has been enacted in an attempt to prevent droughts and conserve the ecosystems of these highly productive valleys.4

There are similar fights to protect water in northern Colombia’s páramos, the ecologically vulnerable high elevations between the upper forest line and permanent snow line. The páramo are a symbol of life in extreme conditions, a place of long cycles of regeneration, reproduction of species and arrested growth. Destroying the páramo destroys not only the ecosystem and the water, but the reproduction of life itself. A Canadian mining company, GreyStar, in the páramos of Santurbán in the department of Santander, near the border with Venezuela, was involved in intense negotiations with the government to build a massive mining operation in the páramo. Ultimately, the government succeeded in getting the company to withdraw its environmental impact study.

Mining operations in South America are also having a major impact on the soil, which is especially important to the indigenous and small farmer populations. Mining concessions have taken tens of thousands of hectares from these people and, in the process, impeded free transit through many regions. The mining has also prevented communities from using the soil to raise stock and harvest subsistence resources such as firewood, mushrooms, wild fruits, natural materials for crafts and plants for culinary and medicinal uses. Mining has also wounded the forest, which is the habitat of the spirits, the forces in favor of and against humans, the place where one consults one’s destiny and where one gets the answers for future decisions. The mountains have a special meaning in the mythology of the high-Andean cultures; they are the Apus, or sacred mountains, understood as divinities whose supernatural powers care for and protect the inhabitants of the altiplano and govern their destinies.

The ancestral and agricultural peoples depend on their territories for their subsistence and for the development of their culture. This is made clear every time the states make commitments to mining development, such as in the case of Wirikuta in Mexico, spurring opposition by communities that the state wants to resettle elsewhere.5 The Huichol people, who call themselves Wixárika, who inhabit the Sierra de Catorce, consider their surroundings to be a sacred place. They call it Wirikuta and they have paid tribute to it from time immemorial. In their cosmogony, Wirikuta is one of the five cardinal points that gave rise to the world; there were born the gods under the influence of the powerful Tau (the Sun), which they consider the pillar of life. Therefore, they say, its destruction would mean the end of humankind.

What is at stake in all these situations is the replacement of stable, ancient systems of life with systems of consumption and markets. Mining displaces the “permanent” view of life, and imposes conceptions of life as “transitory and disposable.” By forcing communities to migrate to cities or other regions, or disrupting their traditional cultures, mining concessions profoundly alter and even destroy communities. In addition, mining interventions destroy archeological vestiges, ceremonial sites, cemeteries, and other material and nonmaterial expressions of culture. Mining exploration roads and large craters resulting from open pit mines inflict harm on large areas of nature, threatening biodiversity as some plant and animal species disappear forever.

Biodiversity is also threatened by climate change, another side effect of mining through the use of fossil fuels in its operations, and in generating thermoelectricity to feed the mineral production processes. It has been noted that nearly 10 percent of global energy consumption can be attributed to mining (Earthworks 2003).

Mining is not just displacing farming from one area to another it is disrupting biodynamic agriculture cycles based on ancestral knowledge that have been effectively used for centuries. Mining threatens the cultural traditions and customs that have sustained soil conservation practices, managed planting time and coordinated agricultural work with subtle bio-indicators. The Quechua and Aymara farmers of Puno were accustomed to predicting the climate and the moments for planting their crops based on biological indicators. The state of development of a species of ants made it possible to determine the rains and frosts in that region of the Peruvian altiplano. If the young ants had lost their wings early, the crops would also come early. A certain cactus that flowered early ratified the message of the insects: the time to plant had come. With the displacement of communities and the consequent abandonment of traditional activities based on ancestral and millenary knowledge of one’s surroundings, we are losing priceless cultural knowledge and traditions, which are often impossible to recover.

The mining industry’s involvement in South American societies has devalued the idea of sovereignty – the ability of a people to decide the fate of its territories. It has also corrupted governments as mining interests use political manipulation and blackmail to achieve their goals. Mining companies have used a series of financial mechanisms to hide their actual income so that they can avoid paying their due income taxes and royalties (Alcayaga 2005). Such corruption of public servants and white collar crime are further eroding the ethics and morality of South American socieites.

The struggle against mining in the region is often presented as opposition to development. In fact, the communities affected and environmental organizations are struggling to recover and exercise their basic human rights. This struggle will continue so long as mining corporations and governments rely upon the mining model to enclose the commons.

Source: The Wealth of the Commons