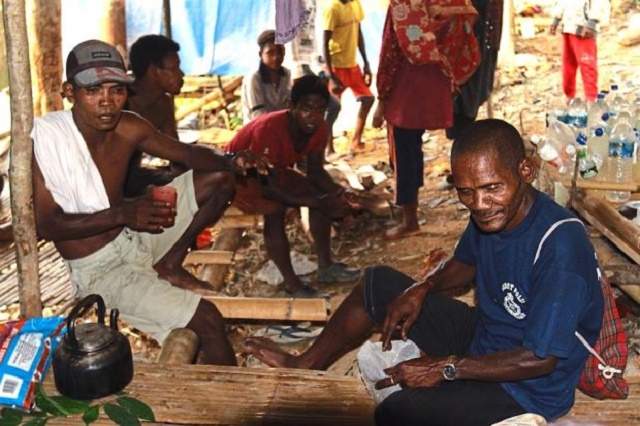 Basic comforts: Kuala Koh village head Hamdan (right) in a makeshift shelter in the village with his son Ramli (left).(Photo from Indigenous Voices in Asia)

Communal forest land has been a bone of contention between indigenous people and the state for the longest time with the Government expected to decide on the issues soon.

IF there is one thing that the indigenous people or orang asal want to know, it is whether their communal forest land would be recognised by the Government.

The indigenous people claimed that the land belonged to them while the authorities said it was state land and only recognised dwellings and agriculture area as their territory.

Minister in the Prime Minister’s Department Datuk Paul Low said the Cabinet would decide on a task force’s recommendations on a Suhakam report on the National Inquiry into the Land Rights of Indigenous People in a week or two.

Communal forest land is known as kawasan rayau in Peninsular Malaysia. It is calledpemakai menoa and pulau galau (fallow land) in Sarawak and paun in Sabah.

Borneo Resources Institute coordinator Mark Bujang said the Sarawak government deemed pulau galau as theirs because the natives had left the land. In actual fact, the community was rotating the use of the land within the same territory.

He said the term kawasan rayau was often thought by outsiders as a place they roamed about but this was not the case.

“For all indigenous people, there are boundaries and whoever trespasses the next community’s land, they would be fined,” he said.

Mark said in Sarawak, the adat (tradition) that the indigenous people practised was incorporated in the Sarawak Land Code.

Customary laws of the Sabah natives were incorporated in the Sabah Land Ordinance while the peninsula orang asli rights to land and land use was provided for in the Aboriginal Peoples Act.

But the problem, Mark claimed, was the Government’s refusal to acknowledge the communal forest.

“Despite the pulau still being used by the natives in Sarawak, more of their land had been opened up, resulting in less land for them.”

Moreover, Sabah and Sarawak governments used to recognise native customary land (NCL) but in the last 20 years, they refused to convert the land to NCL because they maintained it was their land, he said.

The burden of proof was put on the indigenous people, he said.

“If the Government is serious, they should amend the law to recognise kawasan rayauand pemakai menoa, not just the cultivated land,” he said.

Mark was sceptical about the task force’s role.

“For me, it is just a cosmetic change as the task force is only to make changes on administrative process,” he said.

“But the hunting areas included forest reserves and water catchment areas and the Government did not want to let it go,” he said.

“The 2.2ha of land is not economical at all and they want to be given more as they are concerned that their future generations would have little land,” he said.

Juli said that for the indigenous people, land was not just a source of economic produce but closely related to their culture, social history and sacred sites.

Four years after the inquiry, the land gazetted had interestingly increased at a higher rate to 31,480ha.

The report also revealed that some of the approved Orang Asli Reserves were not gazetted from as far back as the 1960s.

The indigenous people claimed that the land recognised by the Government in the peninsula comprised only 17% of their actual land.

The orang asli had said that claims to their traditional land and territories were often “invisible” in the eyes of the District and Land Office or the Lands and Mines Office.

Their land were not marked in the cadastral maps of the Department of Survey and Mapping Malaysia.

All these had made the orang asli vulnerable to being evicted from their land when licences were given out for logging and plantation work.

In Hulu Langat, Indonesian migrant workers who had received bumiputra status had moved into orang asli area while in Merapoh, Kampung Bercah, Pelubi, individual Malays had applied for land and settled in the village of the orang asli Batek tribe, he said.

“Often, the orang asli will flee when others take their land but in some areas where they have nowhere else to run to and settle down, they would stand up to fight for the land,” he said.

In Perak, the Semai of Kampung Senta had gone to court to lay claim to 2,206ha of customary land by way of native title under common law after a private company started moving into their land close to their houses in 2013.

However, they were served with eviction notices from the company which claimed that they were the rightful owner of the 113.7ha of the land in dispute, and had the title deeds to show for it, and suing them for trespassing.

The Semai were counter-suing to set aside the eviction order and for a declaration that the land was theirs by way of native title under common law.

Dr Colin said that while the Federal Government might say they had no power to compel the state to gazette Orang Asli Reserves as land comes under the state jurisdiction, Felda was initiated by the federal authorities.

“It depends on the political will.”

As for the states, they generally did not give or gazette land to orang asli because they were afraid that the land would no longer be in the hands of the state but given to the Federal Government.

However, he said state governments could create orang asli reserve land under the state laws.

Indigenous rights lawyer Dr S. Yogeswaran said the Federal Government could compel states to adhere to a uniformed land policy, despite states having their own laws.

Juli urged the Government to reserve all remaining orang asli land under the Aboriginal Peoples Act.

He said areas in nearby towns and lowland areas should be given individual titles while those in the ­interiors should be reserved as Orang Asli Reserves.

“When the area is reserved, it’ll be marked on the map. Otherwise, people will just apply for the land because it is unmarked,” he said.