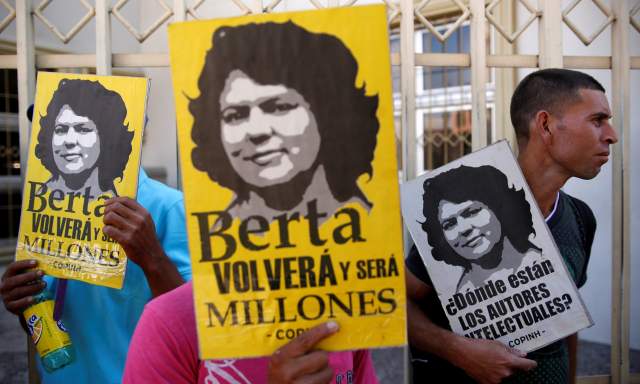 Read original article at The Guardian

Officials from 24 Latin American and Caribbean states have signed a legally binding environmental rights pact containing measures to protect land defenders, almost two years to the day since environmental leader Berta Cáceres was killed in her home in Honduras.

Last year almost 200 nature protectors were killed across the world, 60% of them in Latin America. The new treaty obliges states to “guarantee a safe and enabling environment for persons, groups and organisations that promote and defend human rights in environmental matters”.

The 2016 killing of Cáceres, a winner of the Goldman environmental prize, focused attention on the killings of environmental and land rights activists in the region. Her death was one of 14 such deaths recorded in Honduras that year in a collaboration between the Guardian and NGO Global Witness, making the country one of the deadliest in the world for environmental activists. In a sign of progress, though, the number of killings fell in 2017 and two days before the new pact was agreed, Honduran authorities arrested a former military intelligence officer for masterminding Cáceres’s killing.

Costa Rica’s president, Luis Guillermo Solís, described the treaty as “a turning point” in the fight against poverty, inequality and hate. “It is also crucial for the very survival of our species,” he said. “The right to a healthy environment is a human right.”

Carole Excell, the environmental democracy director of the World Resources Institute, described the new protocol as “a historic stand to safeguard the backbone of environmental protection”.

“The treaty may help Brazil to reverse the trend of regressive environmental laws.”

The agreement is formally called the Latin American and Caribbean countries declaration on Principle 10 (LAC-P10). Emerging from the UN’s Rio+20 conference on sustainable development in 2012, it covers access to environmental information, justice and public participation in decision making.

“I cannot understate how critical it is for communities to have access to environmental information, like data on local water pollution or nearby mining concessions,” Excell said. “LAC-P10 is designed not only to protect environmental defenders, but also to make it easier for people to get information, participate in

decision-making that will affect their lives and hold powerful interests to account.”

The treaty, which was stewarded by Chile, Costa Rica and Panama, also guarantees the right to a healthy environment and impels states to establish transparency bodies to monitor, report and oversee compliance with the new rules.

Read original article at The Guardian