16th May 2015 | Categories: Forests and Climate Change,  Livelihoods and Culture 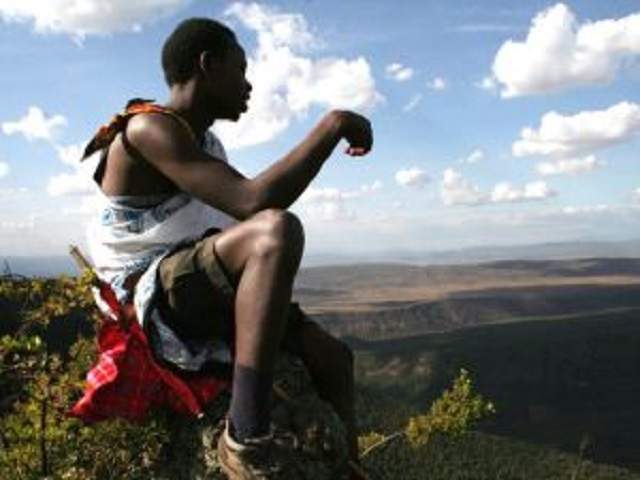 Reuben Sempui seated on a rock on the peak of the volcano Suswa. (Photo: Simone Sarchi)

Persistent droughts are undermining the self-sufficiency of Maasai communities in the Great Rift Valley and worsening their living conditions, writes Simone Sarchi. Now these fearless warriors are fighting the battle against climate change through adaptation, education and technology, and by making peace with traditional enemies.

“God showed me the future of our community in Suswa. Only education can save Maasai. New generations must learn how to take care of cattle and how to cultivate using innovative techniques and small amounts of water.”

It's early in the morning. Reuben Sempui, 22-year-old Maasai man, is wrapped in hisshuka, a traditional black and red tartan pattern garment.

He is sipping some tea while he is keeping an eye on his 13-year-old nephew who is pushing a small herd out of a corral.

“Children usually learn how to take care and graze livestock when they are very young. I started when I was four years old following my brothers”, says Reuben with pride.

Maasai are traditionally semi-nomadic pastoralists. Originally from the lower Nile valley, they started to migrate south in the XV century until they reached the regions they currently inhabit: the districts of Kajiado, Narok, and Trans Mara in Kenya, and part of the northern Tanzania.

The Maasai community, which Reuben is part of, settled on the slopes of the volcano Suswa, in the Kenyan Great Rift Valley, hundreds of years ago during an undefined past. By car, it is only 90 minutes west of Nairobi on the road to Narok, famous touristic destination for safari lovers.

The volcano was formed thousands of years ago by an eruption of basaltic lava and it is characterised by a double crater system. As Reuben describes, it has a wide outer crater with a “stunning sunken crater within a crater”.

Most of the community lives on the flat land between the mounts that delimitate the outer and the inner craters.

The problems of being pastoralists in an arid place

In a manyatta, the characteristic Maasai mud house, Reuben's mother, Mary, 64, is stoking the fire in order to prepare some tea. This drink was introduced by the British colonists and it is called shai, in the Massai language, the Maa.

“The social and community life takes place around the fire and drinking tea”, explains Reuben. “Here, we discuss family's problems and how to face them”, he adds. This morning, Mary, Reuben and his elder brother Daniel, 30, gathered for this reason.

“When I was younger our land was green and always flowering. Rainy seasons were longer and more generous. Now, instead, we miss rain for long periods and often, when it eventually rains, the water that falls it is not enough to hydrate the soil and fill rivers up”, says Daniel.

It is very difficult to imagine a grassy and green land in this area. Currently, there are only sand and dust; dry brown grass; and dry riverbeds. “If the situation keeps being so tough,” says Reuben, “we will be forced to move the livestock to lake Nakuru.”

Nakuru is more than 100 kilometres to the north of Suswa. Taking there dozens of cows and sheeps is not an easy task. “They will need to walk several days, hoping to find some water sources in order to sustain themselves and the animals during the journey”, says Reuben.

“Unfortunately, it might be the only temporary solution to this problem. Cows are skinny and weak. We have already lost some of them. They do not have enough grass to graze.“Then, taking a sip of tea, he adds: “The situation it is so bad that we are forced to buy milk in town because our cows do not produce it any more.”

Milk, like meat and blood, is central in the Maasai diet. In the past Maasai people did not use to eat fruits and vegetables, and it is still rare.

In the last decades they have introduced rice, potatoes and corn in their diet because breeding livestock in such arid places is more and more risky. Animals are weak, they easily get diseases and they are not a reliable and safe food source.

In Suswa, the lack of rainwater is not a direct problem for human beings. The volcano is dotted by cracks in the terrain that emit water vapour. Maasai have stuck black plastic pipes into these cracks. The vapour condenses through the pipes and the water obtained during the process is collected in big tanks.

Due to these fumaroles, the Suswa Maasai community considers their homeland a sacred place. “The water vapour is a resource that we can exploit all year long; during arid periods too”, says Reuben.

“With the clean water that we collect in this way, we are able to quench the whole community's thirst. Indeed, we are very lucky; other Maasai communities live in much worse situations.”

Nevertheless, he adds, this water source is too small to support livestock or cultivate crops. “For this reason we still rely on rainfalls that are becoming increasingly scarce year after year.”

What climate change means in Africa

According to the Food and Agriculture Organization of the United Nations (FAO), more than one billion people live in areas of physical scarcity of water. In addition, another 1.5 billion people suffer of economic water scarcity: the lack of infrastructures to take water from rivers and aquifers.

The blue gold, as the water is often called, is a serious issue especially in arid and semi-arid third world countries such as Kenya.

“Global warming and extended droughts have been worsening our living condition during the last years. Deserts are taking lands and we are facing arduous consequences”, says Daniel.

The Great Rift Valley is an example of the global warming's effects. Professor Shem Wandiga, 75, director of the Institute for Climate Change and Adaptation of the University of Nairobi, says that in the Great Rift Valley temperatures are dramatically increasing and that rainfalls' behaviour is following irregular and unexpected trends:

“Periods of severe drought are more and more frequent. In some areas, rivers and lakes are disappearing. These arid periods are broken by sudden, short and very heavy rainfalls that often cause floods.”

According to Wandiga, rainfalls vary region by region within a few kilometres: “Some areas are witnessing a drastic decrease in rainfall, whereas other regions, such as Nakuro, are registering a significant increase.”

According to the annual report of the Institute For Climate Change And Adaptation, the average global surface temperature is set to grow from 1.5°C to 5.8°C by 2100.

The report continues saying that “the implication for Africa is immense as the African continent is one of the most vulnerable regions to climate change due to low adaptive capacity and the livelihoods of many Africans being largely dependent on utilization of land-based resources.”

The role of education

The consequences will be catastrophic if we fail to find a solution to this problem, says Wandiga: “natives must be instructed on the adaptation technics and technologies to harvest and save water.”

With the increase of water scarcity, and subsequently of food, not only famines, diseases and mortality will intensify, but also conflicts and fights will massively increase among tribes that share the same land.

Ole Ntokoti, 74, a respected and revered Maasai spiritual figure who is considered a prophet, is also pointing in this direction. In 2005, he played a major role in bringing peace between the Maasai and the Kikuyu, the largest ethnic group in Kenya. The tribes clashes broke out in Mai Mahiu, town 40 kilometres East of Suswa, over scarce water supplies.

“God showed me the future of our community in Suswa. Only education can save Maasai. New generations must learn how to take care of cattle and how to cultivate using innovative techniques and small amounts of water”, said Ntokoti.

Thanks to him, most Maasai children in the Suswa community are sent to school. Before his teachings, educated Maasai were only a very small percentage.

However, according to professor Wandiga, Africa's indigenous tribes can do very little to protext their ancient, diverse ways of life unless African governments “start to seriously adopt eco-friendly policies such as reducing the emission of greenhouse gases and deforestation, and promoting renewable and clean energy.”