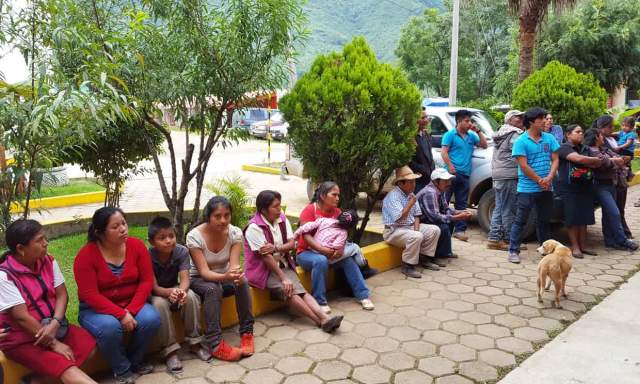 Read original article in The Guardian

Until this month, Celia Pérez could only afford a brief weekly call to her husband, Rubén Martínez, who left left their remote rural community in Mexico two years ago to find a job in the United States.

Pérez, 25, was pregnant with their third child when Martínez headed north; he made it to New Jersey and regularly wires home money from his construction job, but the long separation and infrequent calls have been tough on everyone.

Now, a legal triumph by indigenous activists has cracked the monopoly enjoyed by Mexico’s powerful telephone magnates – including the world’s richest man, Carlos Slim – and opened the door to new services which will slash the cost of communication.
Indigenous Communities Telecommunications (TIC) last month won a long battle with the government to become the world’s first not-for-profit group to be granted a mobile phone concession.

The social cooperative has licence to install and operate mobile phone networks in 356 marginalised municipalities in five of the country’s poorest states: Chiapas, Guerrero, Oaxaca, Puebla and Veracruz.

It means couples like Pérez and Martinez will be able to talk and text on their mobiles for a fraction of the cost currently charged by phone booth operators.

“I am so excited, I’ll be able to talk to my husband in private when I want, and the children can have proper conversations with their dad. The calls are so much cheaper that it feels like a gift,” said Pérez, clutching her mobile phone as she queued with excited neighbours to register for the new service.

Globally, 95% of the world’s population live in areas covered by mobile phone networks, according to the UN agency for information and communication technologies. But that leaves at least 400 million people without any mobile coverage, and another 2 billion or so without access to affordable services.

In Mexico, as in the rest the world, provision is best in towns and cities where dense populations can earn big profits for phone providers.

But rural communities have been marginalized by major telephone operators due to high infrastructure costs and low profit margins. Most are poor and indigenous populations, still relying on exorbitant landline services – or even walkie-talkie radios.

Nuyoó is a remote district in the fertile Mixteca region of Oaxaca, where about 5,000 habitants live in communities amid pine-forested mountains threaded with waterfalls.

The region is renowned for its organic coffee and honey, but families struggle to live off their produce alone. Like Pérez, almost every household has family members working in the US, Canada or cities within Mexico. Opposite the town’s imposing 17th-century church, a Western Union office underlines the importance of remittances to the community’s survival.

A handful of public phone booths are hosted in the village’s few shops. Until recently, Pérez paid 15 pesos ($0.80) a minute to call her husband. Once a month, she would travel two hours to Tlaxiaco – the nearest town with mobile phone signal and 3G internet – to send him photos of their young children.

It was communities like Nuyoó which in 2011 inspired the activist Peter Bloom, a social entrepreneur and founder of NGO Rhizomatica, to petition the Federal Institute of Telecommunication.

Fortino Rojas, 65, the education councillor, makes the first call from Santiago Nuyoó. Photograph: Nina Lakhani. An experimental concession was awarded in May 2014, allowing affordable, community-owned telephone services to be installed in 16 communities in Oaxaca over the next two years.

In July 2016, TIC – which works alongside Rhizomatica - was granted the first-ever permanent licence.

“Lack of access to communication is part and parcel of the general neglect – like poor health and education services – in many indigenous communities,” said Bloom. “Often, they try to resolve the problem with the government and big telecoms companies, but almost always in vain. Now, there is a legal pathway for communities to own, install and operate their own telephone networks as part of a cooperative.”

Nuyoó is the first community to benefit from the July victory.

In all, it cost 180,000 pesos ($10,000) for the equipment and installation – a third of what one multinational provider wanted to charge.

Subscription is free, but each registered user must pay 40 pesos a month – 15 goes to TIC to cover overheads and serious repairs – and the rest stays in the community to cover the upfront running costs.

Calls within the network – which includes 17 communities so far – are free. International and national calls are cheap: one peso will buy five minutes to US.

These long-distance calls are transmitted over the internet – avoiding tolls charged by telephone companies. Spectra Telecomunicaciones, based in Tlaxiaco, buys internet from large providers but uses cheap infrastructure and innovative technologies to slash costs for communities like Nuyoó. It means they can now also access low-cost Wi-Fi.

On a recent afternoon, an expectant crowd gathered in the leafy main square to witness the first calls. Lilian Cruz, 19, searched for a socket to charge her phone, eager to get connected. “I can’t wait to be able to speak to my sister in Mexico City and my aunt in Tijuana – she’s going to help me find a job.”

“I would have to discuss patient information with doctors in Tlaxiaco in the phone booths. This is a small place so everyone knows everyone else. Now, communication will be private and fast,” said Sarabia.

The UN considers reliable and affordable mobile phone and internet services essential to achieving development goals. In 2015, Mexico ranked a disappointing 95th out of 167 countries for phone and internet coverage – overtaken by Iran and Mongolia since 2010. Rhizomatica is currently supporting groups in Brazil, Nicaragua and Somalia to explore similar services.

For the people of Nuyoó, the scheme is a huge step towards self-determination.

Fortino Rojas, 65, the village’s education councillor, was at the head of the line to make the first international call from the community – to his sister in Oregon.

“We want to preserve our culture and tradition but the pueblo can now develop, we can connect with the world, at last,” he said. “We need to communicate with our families; this is as important to us as good transport and health services.”