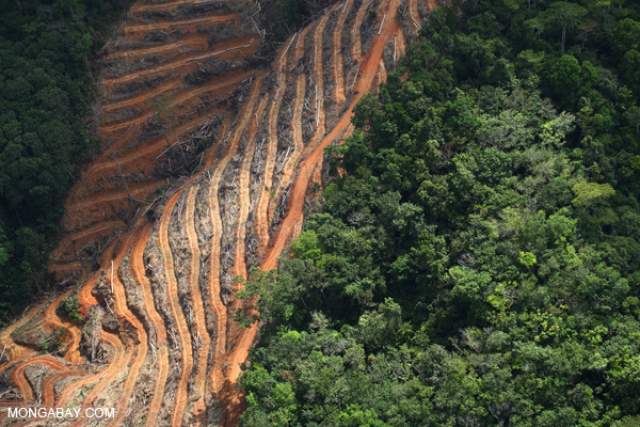 Oil palm plantations are sometimes a source of conflict in Indonesia and Malaysia. (Photo: Mongabay)

Land conflicts pose a serious – and often overlooked – risk to development projects in emerging market economies, warns a new report. Indigenous communities have claims to nearly one third of all land granted in commercial land concessions in 12 countries analyzed in the study, a situation that has led to numerous preventable conflicts and could jeopardize the financial viability of investments in the mining, agricultural and forestry sectors in Africa, Asia and South America.

The Munden Project, a consulting firm commissioned by the US-based Rights and Resources Initiative to carry out the study, analyzed over 153 million hectares of concessions in Argentina, Brazil, Cambodia, Cameroon, Chile, Colombia, Liberia, Indonesia, Malaysia, Mozambique, Peru and the Philippines.

Using Geographical Information System (GIS) mapping technology, the report identified 3,750 commercial concessions that overlapped with indigenous lands, covering a total of 48.4 million hectares. In total, the study found that 31 percent of all land-use concessions overlapped with community land claims in the 12 countries studied – around one out of every three hectares licensed for development.

These conflicting claims carry the potential for billions of dollars in financial losses, both for investors and countries granting concessions. In the agricultural sector alone, a production value of $5 billion is at risk, the report said. Most of this risk came from Argentina, where 84 percent of national soybean concessions overlapped with community land claims, which could result in a lost production value of $4.6 billion.

Other land-dependent sectors face problems as well. In the Philippines, a land conflict linked to the Tampakan mining project – which is predicted to add 1 percent to the national GDP – puts a $5.9 billion investment at risk. The study also showed that 83 percent of Cameroon’s timber concessions overlapped with community forests. This creates a potential for lost profits in the country’s timber sector equal to 0.4 percent of the national GDP, the study showed.

Concerns over global food security and demand for raw materials and biofuels has led to a rush of land-dependent investments in emerging markets in recent years, and the report said research suggests conflicts linked to natural resources are becoming increasingly common.

Many governments have not yet fully mapped indigenous land claims and grant concessions without considering who lives on the land or whether communities support the planned development. Meanwhile, concessionaires, the report found, tend to either assume the government has already worked out an agreement with the local people or rely on “often poorly constructed” compensation plans to “shove these inhabitants off to the side.”

The Munden Project found that conflicts linked to overlapping land claims can halt development projects or lead to increased operating costs up to 29 times higher than expected. Companies involved in land disputes with communities can face domestic legal challenges or prosecution in international human rights courts, physical disruption of operations by affected communities or public relations problems that hurt their ability to do business elsewhere.

Given the lack of information on customary land rights, the report also suggested that the risks it identified through GIS data are just the “tip of the proverbial iceberg.” The total area of concession land overlapping with indigenous claims – and the potential for financial losses – is likely much greater than the figures presented in the report, study authors predicted.

Overlapping concessions also put communities at risk, and threats to local people can cause conflicts over land to turn violent. Rights and Resources coordinator Andy White said in a media release on Thursday that while developers and investors can see profits plummet, “communities that live on the lands in question face different challenges, including poverty, hunger and encroaching development that threatens to force them from their land.”

“The conflicts that often result are avoidable,” Andy added.

Risks related to land tenure are made more serious by the fact that political risk insurance policies generally fail to protect investors against tenure disputes. The new report aims to provide a framework financiers and insures can use to evaluate land tenure risk.

Since companies cannot rely on insurance policies to compensate them for losses related to land conflicts, the report suggested a series of steps companies can take to help evaluate and mitigate risks, such as conducting local risk assessments that map community lands and consider the project’s potential environmental impact, such as the stress investment will put on water resources.

Considering the national context – such as corruption, land laws, the frequency of violent disputes in the country or the frequency of overlap of concessions with customary land – would also help companies evaluate risks, the report said, while adopting operational polices that engage local communities could help ensure that projects run smoothly.

“The financial risk posed by insecure land tenure has not previously been examined in a systematic way,” Lou Munden, chief executive officer of the Munden Project said in Thursday’s media release.

“Legal, civil and sometimes violent opposition to projects can impair profitability and disadvantage local populations,” he added. “However this increasingly common cause of disruption does not feature in the methodologies of ratings agencies or insurance companies, and is overlooked in valuation models used to examine investment risk.”

“At present, very little data is available to investors and operators who wish to assess and manage land tenure risk, creating a highly emotive debate around the issue,” Munden said. “By taking a quantitative approach that uses GIS mapping, we can start to adopt a more pragmatic approach to the avoidance of conflicts over land tenure that seldom benefit any of the parties involved.”

The report, “Global Capital, Local Concessions: A Data-Driven Examination of Land Tenure Risk and Industrial Concessions in Emerging Market Economies,” was released to coincide with an international conference on community land and resource rights, which brought together companies, governments, NGOs and leaders of local communities and indigenous groups to discuss ways to strengthen land tenure. The conference was held from September 19-20 in Interlaken, Switzerland, and was organized by the Rights and Resources Initiative (RRI), the International Land Coalition (ILC), Oxfam, Helvetas Swiss Intercooperation, and IUCN, the International Union for Conservation of Nature.