Indonesia must vote to protect its forests 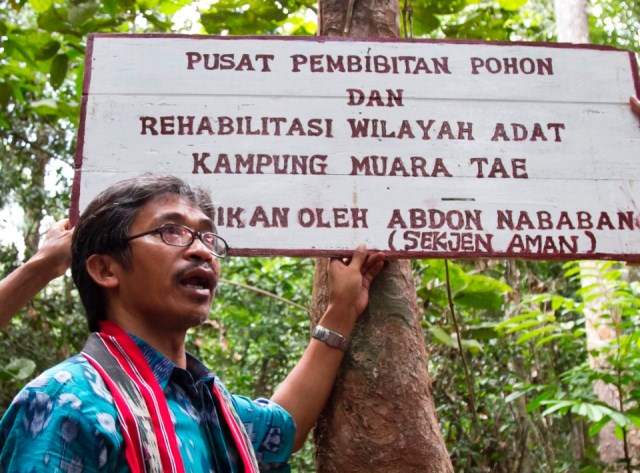 Abdon Nababan, secretary general of the Aliansi Masyarakat Adat Nusantara, a network of indigenous groups, stands near a sign in a forest in Indonesia. (Photo: Sigit Pratama)

In early April, more than 160 million Indonesians will vote for their national and regional legislators; four months later, they’ll cast their votes for president. Among those voters are at least 30 million indigenous peoples who live in all corners of the vast archipelago.

Many of them, including those who took to the streets in March for a historic protest, will choose a candidate based on one question: Who will step up to protect Indonesia’s remaining tropical forests, the source of food, incomes, and spiritual rituals?

Currently, these forests, and the indigenous peoples who depend on them, are under threat from the unimpeded expansion of mining, palm oil and pulp and paper plantations. Since the adoption of the country’s Basic Forestry Law in 1967, in the name of development at any cost, the government of Indonesia has been handing over forests and peatlands, including the ancestral lands of indigenous peoples, to companies eager to profit from the country’s fertile lands.

Now, in Sumatra, Kalimantan and other provinces across the country, armed men guard the tree plantations that have replaced dense forests, excluding the indigenous peoples who once gathered rattan, honey, nuts, resin, natural rubber and other source of income and food.

But Indonesia’s indigenous peoples and the environment are not the only ones to suffer from the felling of the nation's forests. The Intergovernmental Panel on Climate Change (IPCC) report released on Monday asserts that Asia is the region most vulnerable to climate change. The typhoon that devastated the Philippines last November provides tragic evidence of this claim.

Because deforestation is a major source of the greenhouse gas emissions that contribute to climate change, saving Indonesia’s last-standing forests could bolster the region’s and the world’s defenses against the impacts of a changing climate.

Last May, the Constitutional Court ruled that customary forests are owned by indigenous peoples and not by the state, which would open the way for indigenous peoples to protect and care for some 40 million hectares of land across the country. But  President Susilo Bambang  Yudhoyono has been unwilling to stand up to the powerful Ministry of Forestry – intent on maintaining control over and benefiting handsomely from over 75 percent  of the country’s territory – to implement the ruling.

Satellite images of Indonesia’s forest cover reveal that the last-remaining forests overlap with indigenous territories. This is no coincidence. When forest peoples have strong rights over their lands, they are able to make a profound contribution to the world’s battle to halt climate change.

If the forest fires that recently engulfed Riau in Northern Sumatra are any indication, the government of Indonesia has not proven to be the best steward of the country’s forests. If President Yudhoyono wants to make good on one of his most prominent pledges, to  cut the country’s climate change emissions by up to 41 percent, now is the time to return the forests to those who can care for them best.

If he does so, he’ll be remembered not only as the president who took on climate change, he’ll also be looked at as a leader who ushered Indonesia out of an era of corruption, inequity, and authoritarianism.

Abdon Nababan is secretary general of Aliansi Masyarakat Adat Nusantara (AMAN), a network of 2,253 indigenous groups across Indonesia. He has led successful campaigns to earn greater recognition for indigenous peoples’ rights, with a special focus on land and forest rights.

Any views expressed in this article are those of the author and not of Thomson Reuters Foundation.