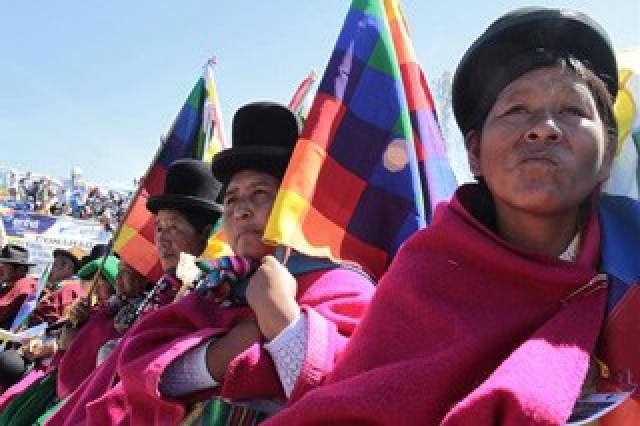 Beginning two years ago, about 350 indigenous women farmers from 14 localities of the central Bolivian department of Cochabamba have been applying strategies to confront climate change.

These women are part of communities from the municipalities of Tapacarí, Arque, Bolívar, and Sicaya, where in the last years the drought has worsened and there is a shortage of water reservoirs. According to the newspaper La Opinión, of every 10 watersheds, only two can supply water. Likewise, the lack of grasslands and fodder decreased the livestock production by 80 percent.

Climate change has affected farming calendars; parasite infestations and cattle diseases have increased; there has been a decrease in fodder and food for families. This has forced the campesino communities to strengthen their traditional organizations and recover ancestral knowledge and wisdom.

“It is very cold in our Quewaylluni and Tanga Tanga communities, and [the cold] burns the potato,” says Feliciana Callata, from the Araque municipality, in statements quoted in La Opinión. “There are also seasons when [it is] very hot, the sun dries the plants. Our llamas and sheep have ticks, lice, and are thin.”

As a symbol of reproduction, the women in Andean farming societies have the fundamental role of selecting the seed after the harvest and planting the seed during cultivation. They collaborate with their husbands and sons in farming tasks, and together with their daughters they raise animals, in addition to feeding the family and attending to its health needs.

Climate change is forcing women to travel to farther and farther places to get water and firewood for their homes and to herd livestock or collect medicinal plants to cure the illnesses of their families and cattle.

With the help of the Atica Foundation, this group of women has learned to manage the livestock and pastures, conserve the soil, and draw water by constructing reservoirs to store water to provide llamas and sheep with water during the dry period, which is between May and August. They have also learned to medicate their animals and plan the oat, barley, and alfalfa cultivation to store food for their livestock.

These activities have empowered this group of indigenous women farmers, who are traditionally vulnerable.

“Gender inequality meets with the risks and vulnerabilities linked to climate change,” ensures Sandra Soliz, general director of the Atica Foundation. “The social and historical disadvantages of women, with their limited access to education and resources, plus the restriction of their rights and their silence when it comes to influence decisions, make them highly vulnerable.”