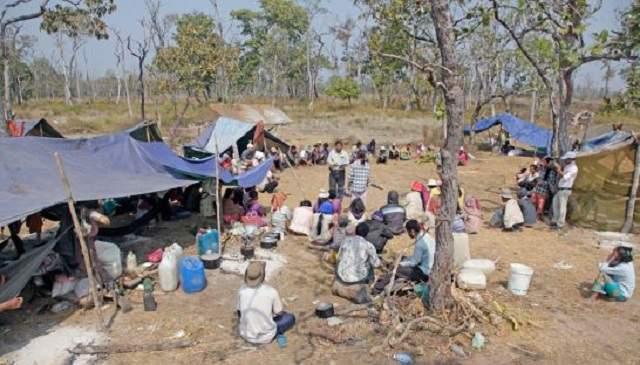 Ethnic Kuoy villagers gather at their camp in Preah Vihear last year for a meeting to discuss the protection of their community forests from companies trying to develop the area. (Photo: Heng Chivoan)

Despite Cambodia’s indigenous peoples being legally recognised and protected under the country’s Forestry and Land Laws, limited implementation combined with a lack of coordination have resulted in many indigenous communities being denied their land and legal rights, according to a report released this month by the Heinrich Böll Foundation.

The German think tank says that land concessions and economic development have trampled efforts by the country’s indigenous communities to secure customary lands.

“Indigenous peoples are estimated to be managing more than 4 million hectares of Cambodia’s forests, lands and ecosystems,” the report states. “Over the last two decades, however, at least 2.1 million hectares of the country’s land have been transferred to more than 300 ELCs [economic land concessions] or companies from various countries, for commercial large-scale agricultural investments.”

The report also says that in spite of various NGOs and UN agencies working to assist indigenous communities with mapping and capacity-building, these efforts are often ignored by the government.

There are anywhere from 101,000 to 190,000 indigenous people living in Cambodia, making up approximately 1.4 per cent of the population. And the country’s indigenous groups – including peoples such as the Phnong, Kuoy and Lao – are said to be disproportionately affected by Cambodia’s state economic policies.

A major hurdle in combating the country’s rapid development lies in the difficulties these communities face in getting their communal rights recognised: out of about 503 communities, only 18 have officially been granted communal land rights.

In 2015, the report says, 267 ELCs occupied 2,196,628 hectares, or “more than 60 per cent of Cambodia’s arable land”. An analysis of 167 indigenous villages and ELCs points out only 85 communities are directly outside of these concession areas and their buffer zones. Furthermore, out of the 18 communities that have actually received communal rights recognition, six of these are overlapping with ELCs.

Pheap Sochea, president of the Cambodian Indigenous Youth Association, said the government must protect indigenous peoples by expediting the process in which communities can be granted their communal rights.

“The government must speed up these communal land titles,” he said.

“We are among the most marginalised groups in society, and we are the most severely impacted by development.”

Cambodian Center for Human Rights land reform project coordinator Vann Sophath lamented the difficulty that indigenous peoples face in registering their land with the government due to a lack of documentation.

“The legal process is very long and very complicated,” he said, adding that indigenous peoples often “don’t understand the process well, so it’s very hard for them”.

But government spokesman Phay Siphan said that indigenous communities must work within the framework of the law to achieve their aims, dismissing claims that they are discriminated against at the administrative level.

“The government wants them to solve disputes through the law,” he said. “They go through NGOs and not through the courts.”

He added that indigenous issues must be dealt with on a “case by case” basis.