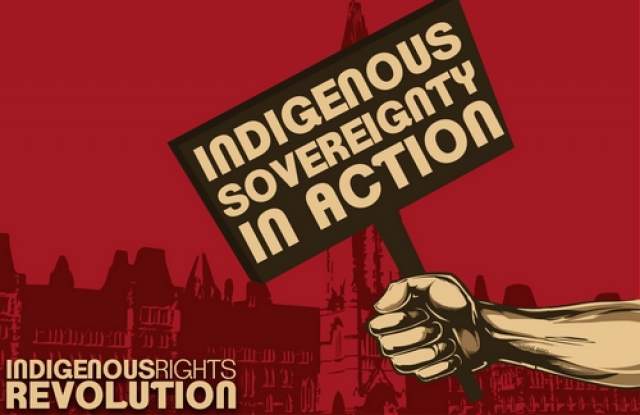 Thousands of people across Canada mobilized Monday, 10 December 2012 under the banner “Idle No More” to protest the effects of current and proposed government policies on the nation’s indigenous peoples.

While it has received little mainstream media attention, Idle No More has capitalized on social media networks to spread information about the widespread rallies, protests, and roadblocks, causing the hashtag #idlenomore to trend on Twitter in Canada this week.

The rallies -which continue to take place in major cities like Toronto, Ottawa, Edmonton, Winnipeg and Calgary- are the broadest expressions of discontent from First Nations that Canada has seen in years. The movement has been deemed by some as “Native Winter,” in the style of the “Arab Spring” revolutionary wave that over 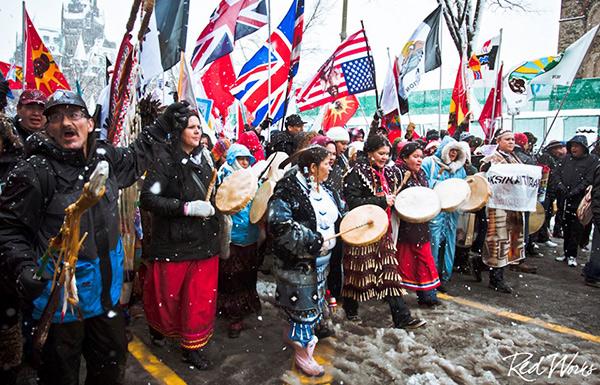 In one of the more high-profile actions of the Idle No More movement, Attawapiskat Chief Theresa Spence began a hunger strike on Tuesday which she plans to continue until Prime Minister Stephen Harper and Queen Elizabeth II agree to a treaty meeting with First Nations Leaders.

She stated that she is willing to die for her people unless the Conservative Harper government shows more respect for its indigenous citizens. Aboriginal Affairs Minister John Duncan has offered to meet with Chief Spence. Supporters have vowed to fast in solidarity with Chief Spence and are organizing via Facebook events in Toronto and other Canadian cities.

The Attawapiskat Nation received international attention in October of last year during a winter housing crisis that brought to light dismal living situation of the small Northern Ontario First Nations community. Protestors point out that the Attawapiskat incident is just one example of the Conservative government’s negligence of First Nations’ needs.

The Idle No More movement was sparked by events on 4 December, when First Nations representatives were blocked from entering the House of Commons in Ottawa to discuss their concerns about a proposed Bill.

The Harper administration’s omnibus law, Bill C-45, has served as the rallying cry for the Idle No More movement. Also known as “Jobs and Growth Act 2012,” Bill C-45 makes changes to the Indian Act without the consultation of First Nations. It includes extensive amendments to more than sixty laws, including not only the Indian Act, but also the Navigable Waters Protection Act, the Fisheries Act and others. Opponents argue these changes violate existing treaties and weaken environmental protection of land and water.

In her powerful and widely-discussed piece, “The natives are restless. Wonder why?” Métis blogger Chelsea Vowel points out that this movement goes beyond protesting Bill C-45 to resisting a more systemic state-citizen relationship:

What it all boils down to is this. Canada has not committed itself to addressing the colonial relationship it still has with indigenous peoples. Canada is in denial about that relationship.

She goes on to explain the movement:

Today, in cities and communities all across the country, indigenous peoples are rallying together to speak out against a rash of hastily shoved-through pieces of legislation created without 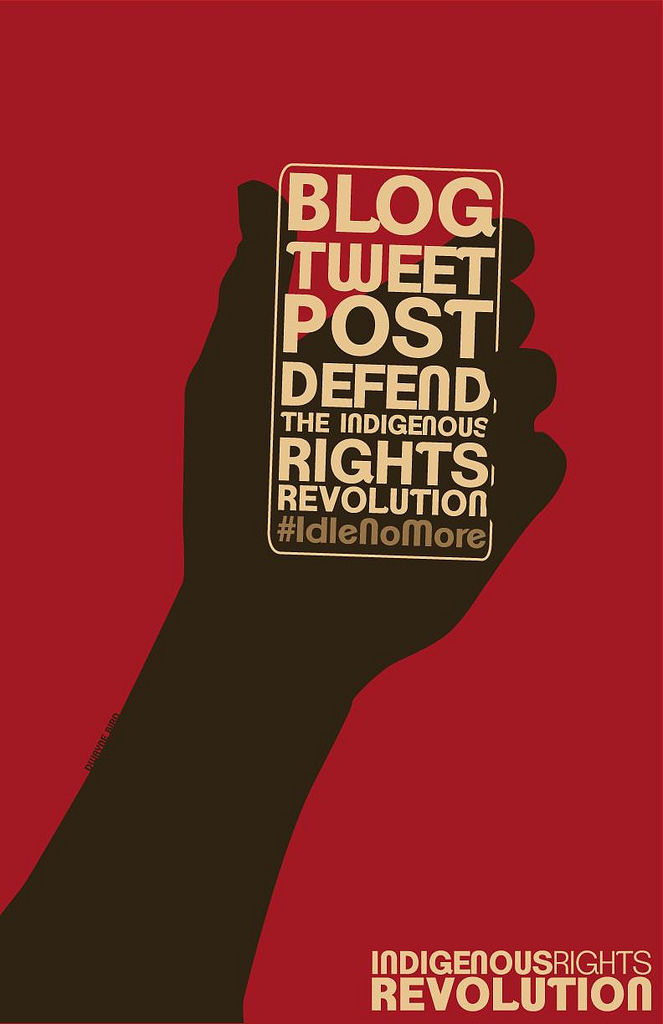 First Nations consultation. Legislation that promises to have serious implications for aboriginal rights.  However, that is not the sum total of the issues being addressed. The ongoing and unhealthy colonial relationship Canada has with indigenous peoples is at the root of this, and finds expression in so many problems from environment to health to incarceration to suicide to education to violence and so on.

Rallying under the cry of “Idle No More“, this truly grassroots movement is swelling as people take to social media in a way I can honestly say is unprecedented. If you’re looking for one unified message, you’re not going to find it…unless it’s “hey Canada, you need to start taking our concerns seriously.

But it is not only First Nations who share this view. In fact, in an interview with PostMedia News published on November 30, former Canadian prime minister Paul Martin discussed low levels of health and education among Canada’s indigenous groups. He charged that in Canada:

We have never admitted to ourselves that we were, and still are, a colonial power… And we continue that focus on assimilation. There is no other reason, no other excuse for the discrimination in funding.

The Bill C-45 comes on the heels of other government actions that could weaken indigenous organizations. In September 2012, the federal government announced budget cuts of at least 10% to all national and regional aboriginal representative organizations. Emphasizing the legacy of these budget cuts, McGill University student and Metis-Cree writer Tanya L (@TanyaLalondie) tweeted on December 12:

@TanyaLalondie: I have watched cut after cut to programming aimed at helping our people heal, grow, develop and gain footing in an unequal world #idlenomore

This government is attempting to systematically sell off our resources and make even more resources available for exploitation…. This is much greater than angry protesting natives, this is about becoming aware of the world in which you live.

Blogger Nora Loreto has compiled a post suggesting ways in which non-indigenous peoples can support and participate in the protests.

IKEA Monkey versus Idle No More

Protest participants have criticized mainstream media for failing to cover the widespread protests. Several bloggers noted that the recent story of a coat-wearing monkey in a Toronto IKEA received more attention than the countless First Nations rallies across Canada.

However, Twitter has exploded with activity from the movement under the hashtag #idlenomore. Users have disseminated information about planned rallies, roadblocks and gatherings via social media. As activist and writer Derrick O’Keefe notes, they hope that a continued social media presence will force the story of Idle No More into the mainstream.

For up-to-date information about the nation-wide movement, check out www.idlenomore.ca or join the movement’s Facebook page. For images and updates on the campaign, please follow the Aboriginal Multi-Media Society.

The next major Idle No More gathering is set for December 21.