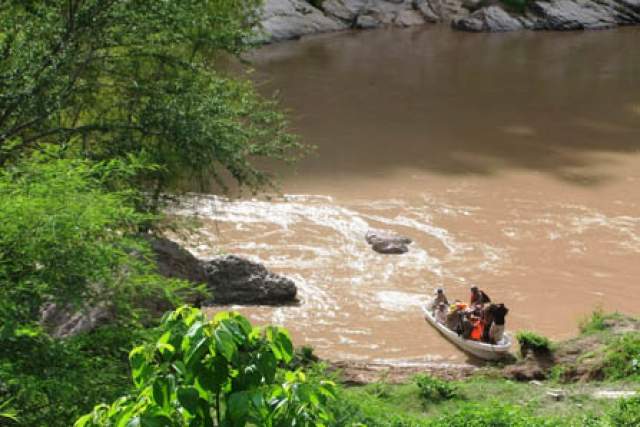 The history of Presidio de Los Reyes, Nayarit is a case study in the Nayeri population ́s battle with the Mexican State, be it under the 18th century colonial government, the 19th century liberal government, or the versions born of the Revolution in the last century.

The cobbled and dusty streets of this sweltering hamlet reflect the divisions caused by the latest government megaproject: the Las Cruces hydroelectric dam. The project forms part of  the Federal Electricity Commission (CFE) plan to dam the San Pedro Mezquital River in the ancestral territory of the Cora indigenous people.

The proposal threatens up to 18 sites recognized as ancient and sacred to the indigenous people, for reasons that outsiders usually don’t even try to understand.

The town itself is split first by the river, and then by the history of mestizaje (the integration of races or cultures). Almost all the mestizos (mixed-race) individuals, now with two generations in the area, overwhelmingly support the project, which has promised to create thousands of jobs–the majority short-term, better infrastructure, and social and healthcare assistance.

Historically from another age but geographically less than a half mile away across the river, are the descendents of the original Cora people. Beyond their traditional suspicion and mistrust, the Cora believe the artificial reservoir heralds the destruction of a central part of their world, yet one more step in the prolonged death of a culture whose mountain villages no longer are the impenetrable frontier they once were.

Across the gentle and fertile valleys of the Nayarit coast, where small-scale fishermen live off of the resources of the National Wetlands delta, a highway, still incomplete, passes westward through Estación Ruíz toward the mountains of the Gran Nayar. This is the route to Presidio de Los Reyes and the indigenous community of San Pedro Ixcatán, one of the nine towns that comprise the Cora world.

Because of its proximity to the grasslands, many farmers have settled here and hold agrarian rights. They are not always in favor of local interests, which has resulted in conflicts, such as one this past Oct. 12.

“The Federal Electricity Commission has taken advantage of this in order to try to divide us; they promise everything but it is conditioned on a ‘yes’ vote. And if that doesn’t work, they fabricate agreements, meetings, and a whole string of tricks with the help of the Agrarian Procurator’s Office (PA) and the state government,” says the delegate for the Nayeri Indigenous Council, Julián López Canaré.

“A megaproject like this expropriates a large quantity of land that is part of our ancestral territory, which is in itself very small given all the past invasions. But it is also an attempt to privatize the water. We believe that for our culture to continue we need to decide for ourselves how to utilize our land and to debate what we think development should be,” he adds.

The Cora community has known of the project since 2008, and yet it was only in recent months that their representatives received an offer to discuss a formal agreement.

After long consultations with those in the mountains, and with academic allies and civil society, the indigenous authorities decided to say “No” on April 7, 2013.

The pushback was strong: on April 14, government supported organizations and the PA attached the signature sheets of voters from the meeting, and with their mestizo allies (not all of them) granted permission to continue exploration work on the San Pedro River. There were payoffs reported. To name one example, 30 vials of scorpion anti-venom serum that had been delivered to the local clinic disappeared after three days. “They told us that it was needed elsewhere,” said one inhabitant.

The PA’s resident in charge, Rómulo Pérez Cruz, admitted that they couldn’t officially certify the meeting since it lacked a quorum. According to the National Agrarian Register, San Pedro Ixcatán has 920 members rights-holders, but it turned out that 515 dead people still appear as voters.

In what might be described as a Kafkaesque trail of events, the 515 had been repeatedly sanctioned for being absent over the years since the ejido community initially registered. Then, after some time, their continued absence was ignored and they were put back on the rolls.

The area’s rough terrain permitted the Cora to resist the European conquest for two centuries. But today, as engineers have discovered the ideal conditions in these mountains for producing electricity because of a 607-foot drop in elevation, this same mountain backdrop seems to be changing the direction of a destiny that almost never has been promising for the Cora.

And not only is it a matter for the Cora. The future of fishermen upriver in the estuaries of the National Wetlands is also at stake. For them, the dam implies the loss of the equilibrium in the contributions of fresh and salt water, as well as a disruption in travel corridors for mountain species, and the death of the mangroves that are the cradle of biodiversity.

Augustin del Castillo is a reporter for El Milenio Jalisco, Winner of the 2010 Walter Reuter Prize for Journalism and Reuters- IUCN Regional Prize 2008 for Excellence in Environmental Journalism. This article is published with permission from the e-magazine Meloncoyote, a project of Journalism to Raise Environmental Awareness and a partner organization of the CIP Americas Program.