Indigenous cultures in Colombia at risk of extinction 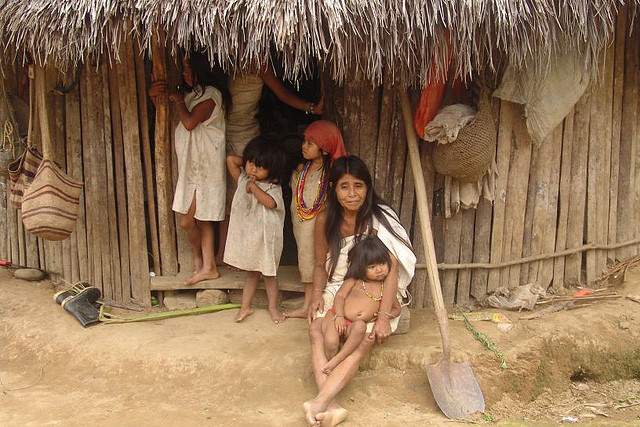 Tayrona Indians in a traditional house on the way to Ciudad Perdida in northern Colombia. (Photo: Nick Leonard)

The Andean Coordinating Body of Indigenous Organizations (CAOI) and the National Indigenous Organization of Colombia (ONIC) are both warning that 65 of 102 indigenous cultures caught in an expanding armed conflict zone in Western Colombia are at risk of cultural extinction. Both the rebel FARC and the government are classifying this destruction as “collateral damage,” with indigenous villagers caught in crossfire, killed in minefields and forcibly displaced by both government and rebel forces.

Making matters worse is the expansion of mining activity in the area, with mining companies allegedly hiring paramilitaries to forcibly remove vulnerable indigenous villages. During the first nine months of 2012 alone, these combined factors caused the forced displacement of 11,000 indigenous people in the region.

Indigenous communities also believe both FARC and the government are specifically targeting their leaders in retribution for  exposing atrocities committed by both sides in the war. Villagers are also often recruited to join FARC, with FARC killing them if they refuse. FARC once supported the protection of indigenous groups, but critics argue that they are now allied with drug cartels, which also want to seize indigenous land. All of these combined factors are  causing a perfect storm for indigenous people.