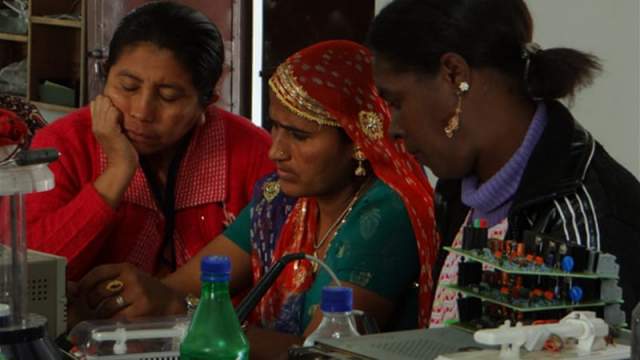 Living in a palm-lined thatched roof house surrounded by dense jungles and rows of corn and cassava in the Santa Teresa village, 42-year-old Florentine until now has spent all her evenings in the dark, literally.

But today, sitting in the dusty village of Tilonia in Rajasthan India, the Mayan woman is lighting the first sparks, which three months from now will bring electricity for the first time in her hometown in Toldeo in Latin America’s Belize.

“I never thought I could do anything. My life revolved around planting corns and cassava,” Florentine said, with an apparent coyness to hide her low educational qualifications. “I only studied till class six you know, I don’t read or write much. I had no idea what a solar panel is or that sun can bring electricity. I was surprised to even discover a solar lamp when I first came here. But now I can fix a solar light,” she said with a shrug.

Florentine is one among the 37 women coming from 11 least developed countries - with lowest indicators of socio-economic development and Human Development Index in the world - currently undergoing the training for solar engineer in Tilonia’s Barefoot College.

Remotely located in the southern-most part of Belize, Toledo is often referred to as a ‘forgotten district', as it is still far from any signs of development. Most of the people have no fixed source of income; subsistence farming carried in the leased village land in the jungle provides for food. Florentine plants her vegetables and grains in the jungles of Santa Teresa and earns $1 for every pound of produce, that is, if she has enough to feed herself and her young son.

“Life is hard there. I am a single woman, and there is no one to support me or earn money for me,” she said.

With a high rate of malnourishment, illiteracy, the socio-economic conditions in Toledo are so low that almost 75 to 100 per cent of households lack even the basic necessities of life and the income to buy them. The dense jungle with heavy rainfall has made the region largely secluded with few paved roads or electricity.

Her son heard about the programme run by the Barefoot College and told her to go. She looked up the lone encyclopaedia in the house to find where on earth India was.

Women are incredible agents of change. The problem is they have been either barred from participating in development as they didn’t have knowledge, as they are blocked from access to literacy, education, money. Once they get rid of these barriers, it all opens up
Megan Fallone, senior advisor to Barefoot College

“I was very scared but my son convinced me to go as it will help not just my family but the entire village,” she said, fiddling with the electric circuit meter to test the prototype solar lamp in the classroom of Barefoot college.

Only about 34 per cent of Belize’s largely rural southern region have access to the electric grid. The rest burn kerosene priced at a high $10 per gallon or depend on wax candles and batteries to light flash lights. It is in such villages like Santa Teresa in Belize that Tilonia’s Barefoot College goes to find its women to be trained in solar engineering.

“Women are incredible agents of change. The problem is they have been either barred from participating in development as they didn’t have knowledge, as they are blocked from access to literacy, education, money. Once they get rid of these barriers, it all opens up,’’ said Megan Fallone, senior advisor to Barefoot College.

Founded in partnership of a local farmer from Tilonia, Meghraj, and a young social worker from Delhi, Sanjit Bunker Roy, the Barefoot College has roots in “grafting formal urban knowledge on rural wisdom” to gear towards self-sustainability.

The college started the solar programme first in the 1990s to provide access to electricity in the remote and isolated parts of India, and is the only fully solar electrified college built and run by the rural poor.

The programme went global and has been replicated in developing and least developed countries from Africa and the Middle East since 2004, teaching solar engineering skills to illiterate older women from rural communities, with 'no access to lighting, electricity, learning or clean drinking water'.

“We have stood in the village of each and every woman here, and seen her situation, what her life was and what she has to go through to survive there. It is the women who suffer the most from lack of one or all of these parameters,” says Fallone who travels across the countries of underdeveloped and developing world to identify villages where Barefoot College can facilitate learning and training for solar electrification.

There are huge geographical differences and very different issues which affect the women of these villages.

From cultural barriers to conditions affected by civil wars, drought, famine, domestic violence, low income levels and often no livelihood, the reasons of their suffering are varied.

Unlike Florentine, whose main concern was lower education and life prospects for her young son, it is the fear of tigers that haunt Nepal’s Neema Gurung, another participant training to be solar engineer.

“This is true. Tigers often wander around our villages and have attacked locals in the past. With no electricity, it becomes easier for the animal to attack and difficult for the humans to defend,” she said.

Gurung’s village of Banepa Raviopi is set on the hilly Kavde district in Nepal and she has always finished her daily chores before the sunset.

“It's like we are locked in our own house after darkness. We are scared to even go out in the open for toilet due to fear of animals. It is at such times, I realise that it would be better to have electricity, so that we can at least see in the dark.”

Fallone says the challenge is to find common but universal solutions to address the varied sufferings of women coming from different regions.

As a part of its South-South cooperation programme, the Indian Government’s Ministry of External Affairs helps women participants with the air fare and part of the fee for the training course in Tilonia.

The local village community has to select and decide which old and uneducated woman will cross the shores of their country to travel to India for six months, a harsh one for many of the communities who struggle to balance their traditional mindset vis-a-vis access towards better living conditions.

In the past, Barefoot College had to convince village elders and men of the family from countries like Zanzibar, Jordan and Afghanistan to allow the women, who had never stepped out of purdah or spoken with men, to participate in the training, which will eventually make them professional solar engineers with a monthly salary.

In Tilonia, the women start from scratch, learning to identify and code 'colours' in their local language for electricity circuit and tools. In lay man’s terms, it is difficult to comprehend how an uneducated woman from tribal and remote parts of the world with no knowledge in English can learn how to fix solar electricity. But Gowardhan Tepan, master trainer for the solar engineer programme in Tilonia, knows the trick of the ropes, which he himself learned as a student of the Barefoot College.

“We communicate through sign language and colour codes which are numerically arranged and help them to remember the permutation and combination of the wires without needing to read or write,” he said.

In six months, the women learn to handle sophisticated charge controllers and inverters (solar cells produce direct current, DC, which is converted into standard alternating current, AC, using an inverter), to install solar panels and link them to batteries, to build solar lanterns and to establish a local electronic workshop where they can carry out all major and minor repairs to the solar power system themselves merely by listening and memorising.

The Barefoot College makes an investment of up to $50,000 in solar equipment for 120 households in the participant’s village. Once the course is finished, the women go back to their villages where they help in installing solar lamp kits.

Each household contributes the same amount towards maintenance and upgradation of the solar installation, which they used to spend on kerosene, candles or batteries, before the onset of electricity. The women solar engineers are paid a monthly salary for fixing and repairing the solar lamps or kits and a committee headed by 4 women and 3 men from the village remain in charge of the equipment.

By 2015, Barefoot College would have trained women solar engineers in each of 43 least developed countries. But much before that, Florentine’s small village of Santa Teresa would have dim lights in the dark nights of the forest.

“When I go back now, I will bring lights to the community. When I remember my troubles, I feel it’s passed, it’s past now.”