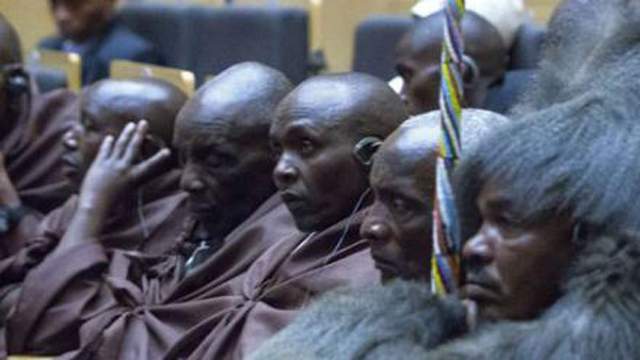 The Ogiek of Kenya have won a landmark land rights case at the African Court on Human and Peoples’ Rights.

The ruling makes clear that the protection of the Mau forests cannot justify the evictions of the Ogiek from their ancestral lands, but also that these evictions have not protected the forests.

A court reading in Arusha, Tanzania, on Friday 26 May, lasted two hours and made a series of milestone judgements in favour of the Ogiek of Kenya’s Mau forests. The Ogiek have suffered evictions from their ancestral land in the last two decades, and Minority Rights Group has supported the Ogiek to bring their case first to the African Commission in Banjul and then to the African Court in Arusha. It is the first time such a case has been heard in the African Court and sets a powerful precedent for other such cases across Africa.

The African Court has now categorically stated that the Mau Forest is the Ogiek ancestral home, and an area on which they rely for their livelihoods, traditions and culture, and has said that the preservation of the forest was not a sufficient reason to deny the Ogiek access to their land, especially as there was no evidence that they had destroyed the land nor that evictions help protect their forests.

The Court stated that the Mau forests are the ancestral home of these Ogiek peoples and that “the Respondent [the Government of Kenya] does not dispute that the Ogiek have inhabited this land since time immemorial.” The Court also stated that the most salient feature of indigenous societies is their unhindered access and use of their traditional land.

The ruling stated that Article 14 of the African Court makes clear that use of land can be restricted in the public interest, and that the justification for the eviction has been to protect the natural environment. However, the Court ruled that the Respondent, the Government of Kenya, had provided no evidence that the Ogiek are the ones responsible for forest destruction. In fact, the Court stated that, contrary to the Respondent's statement, the Mau forest has been allocated to others in a manner which is not consistent with protecting the forest, and that the Respondent has also conceded that the Mau Forest degradation is very much associated with other factors (such as incursions, allocation to others and logging), so the Court does not accept that the eviction of the Ogiek can be justified with reference to the need to protect the forest.

The court found that in evicting the Ogiek from their lands the Government of Kenya had violated the Ogiek's right to their lands, and that the Ogiek had repeatedly experienced discrimination, and continue to suffer, and that meanwhile these evictions have not helped protect the forests.

The full judgement will be made available shortly, as will the livestream of the ruling when it is uploaded to the Africa Court channel available on YouTube.