Guatemala cracks down on anti-mine protests 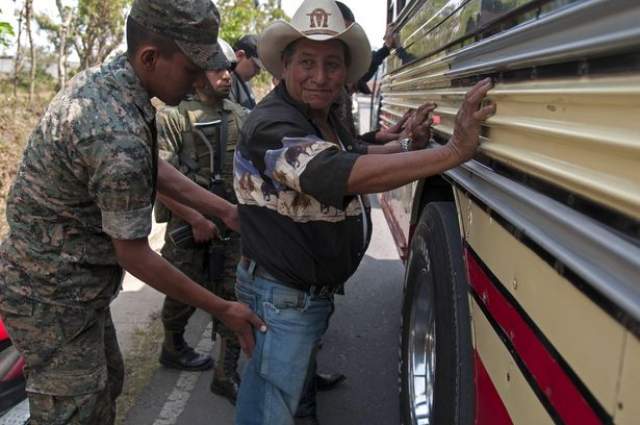 A man is checked for weapons by soldiers at a checkpoint in Mataquescuintla, Guatemala, Thursday, May 2, 2013. (Photo: AP Photo / Luis Soto)

Guatemala's government declared a state of emergency and banned public gatherings in four townships east of the capital Thursday following several days of violent clashes between police and anti-mining protesters.

The confrontations, which began over the weekend, have left one policeman dead, six residents wounded by rubber bullets, and police patrols and other cars burned. Twenty-three police officers were briefly held by protesters before being freed.

“The investigation has revealed that a series of criminal acts were committed, from murder to kidnapping to the destruction of government property,” said President Otto Perez Molina, explaining why he declared a state of emergency for the townships in the states of Jalapa and Santa Rosa.

The government sent in 500 police officers and 2,000 soldiers, some in armored personnel vehicles. It said protesters were armed with guns and explosives. Clashes have involved police, mine security guards and local protesters.

Residents of the area are mainly members of the Xinca indigenous group. They claim the Canadian-owned Escobal silver mine, known locally as the San Rafael mine, threatens their local water sources.