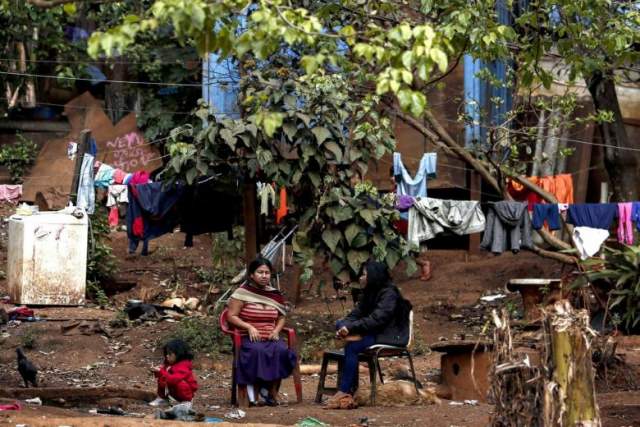 In Brazil, deforestation in indigenous community forests from 2000 to 2012 was less than 1 per cent, compared with 7 per cent outside those areas.PHOTO: AFP

STOCKHOLM (AFP) - Native peoples struggling to retain or regain stewardship of forests that sustained them for countless generations may finally have backing from an organisation with both swag and sway.

The International Land and Forest Tenure Facility - the first and only global institution dedicated to securing the land rights of indigenous communities worldwide - was formally launched in Stockholm on Tuesday (Oct 3).

Funded by Sweden, Norway and the Ford Foundation, a major US philanthropy, the Tenure Facility has already provided grants and guidance for pilot projects in Peru, Mali, and Indonesia, helping local communities leverage rarely enforced laws to protect their land and resources.

Disputes over land rights in tropical forests teeming with exploitable resources - from hard woods to precious stones to oil - can quickly escalate into deadly conflict, and local peoples more often than not wind up on the losing end.

More than 200 environmental campaigners, nearly half from indigenous tribes, were murdered around the world in 2016 alone, according to watchdog NGO Global Witness.

Restoring some measure of control to the original inhabitants of forests appropriated by corrupt governments or extraction industries has also proven an effective bulkhead against global warming, according to a 2014 global survey by the US-based World Resources Institute, a think tank.

In Brazil, for example, deforestation in indigenous community forests from 2000 to 2012 was less than 1 per cent, compared with 7 per cent outside those areas.

Tropical vegetation soaks up planet-warming CO2 emitted by the burning of fossil fuels.

Destroying these forests outright not only reduces the area available to absorb carbon dioxide, it also releases CO2 into the atmosphere, accounting in recent decades - along with agriculture and livestock - for more than a fifth of global greenhouse gas emissions.

“Creating mechanisms that allow indigenous peoples and local communities to gain tenure over their land or forests is a way to tackle both these problems,” he told AFP ahead of a conference keyed to the launch.

Walker has pledged five million dollars, and expects - based on other grants in the pipeline - the facility to have 100 million within a year.

The project aims over the span of a decade to boost forestland properly titled to indigenous peoples by 40 million hectares, an area twice the size of Spain.

Such efforts, they calculate, would prevent deforestation of one million hectares and the release of 500 million tonnes of CO2, more than the annual emissions of Britain or Brazil.

“The Tenure Facility provides a powerful solution to save the world's forests from the ground up,” said Carin Jamtin, director general of the Swedish International Development Cooperation Agency, a key funder.

More than two billion people live on and manage half the world's land area in customary or traditional systems, yet indigenous communities have formal legal ownership of only 10 percent.

And even where they do have title, corruption and abuses have led to protracted conflicts with local and national governments, companies and migrant workers.

A controversial UN-backed programme, for example, known as REDD+ - Reducing Emissions from Deforestation and Degradation - creates incentives to keep forests intact, paid for by rich nations or companies seeking to offset pollution under carbon trading schemes.

But the projects that REDD+ finances can push aside the needs and rights of indigenous peoples who are often most directly affected by the changes set in motion, critics say.

A peer-reviewed 2013 study - one of the few to examine the impacts on local communities - concluded that less than half of 50-odd projects in Africa, Latin America and Asia did anything to alleviate the poverty of forest-dependent peoples.

But many did enhance their land tenure rights, they concluded.