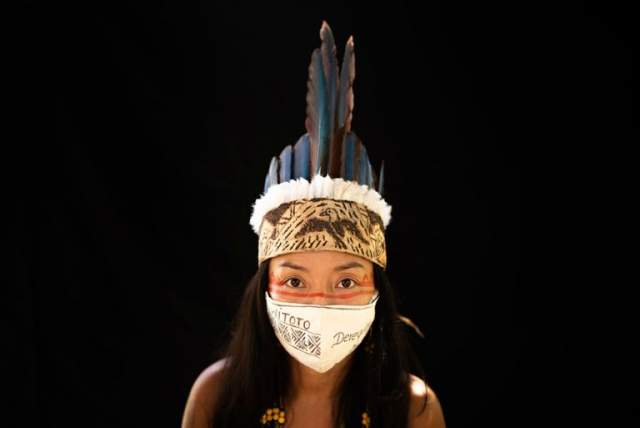 Vanda Ortega, 33, an ethnic Witoto, has been outspoken in denouncing government neglect of her people, including the undercounting of indigenous patients infected with COVID-19. Credit Photograph by Felipe Dana, AP, for National Geographic

With the coronavirus spreading into remote territories across the Brazilian Amazon, indigenous leaders and rights officials are pleading with the government to adopt urgent measures to head off a catastrophe.

According to figures compiled by the Articulation of Indigenous Peoples of Brazil (APIB), the country’s principal indigenous federation, deaths from COVID-19 in indigenous communities have risen from 46 on May 1 to 262 on June 9. Together with numbers tallied by state health departments around the country, APIB’s statistics show that 9.1 percent of indigenous people who contract the disease are dying, nearly double the 5.2 percent rate among the general Brazilian population.

Witoto tribal nurse Vanderlecia Ortega dos Santos prepares an examination room for COVID-19 patients in a clinic ourtside Manaus. She provides the only frontline care for her community of 700 families. Anthropologists say an average of one tribe a year disappeared from the Amazon during the first eight decades of the 20th century—victims of epidemics, violence, and forced assimilation. Indigenous leaders say the coronavirus pandemic and hostile government policies represent a renewed threat to their peoples' survival.

The growing number of cases and the government’s sluggish response have prompted allegations of incompetence and disarray in official efforts to protect vulnerable tribal populations from contagion. Indeed, government health-care workers, together with illegal mineral prospectors and other intruders, now figure among the principal vectors of infection into protected indigenous territories. A report released last week by the federal attorney general’s office accused a team of health workers of “flagrant negligence” and decried the likelihood that government nurses and technicians had spread the virus among the very indigenous populations they’re supposed to protect.

On June 4, the federal indigenous health service, known by the acronym SESAI, acknowledged that four of its workers tested positive for the virus while deployed to a Kanamari tribal village in Javari Valley Indigenous Territory in far-western Brazil. A SESAI communiqué sought to downplay the episode, saying that only one of the workers had developed COVID-19 symptoms and that all four had been removed to quarantine.

But the attorney general’s report, released on June 5, voiced concern that the infected workers may have spread the virus to several other villages. And it accused another team of “flagrant disregard of the epidemiological risk” for entering the northeastern side of the Javari reserve without observing recommended quarantine protocols, to tend to Korubo tribespeople deemed particularly vulnerable.

A shaman of the Dessana indigenous group collects leaves of a medicinal plant on the outskirts of Manaus, the capital of Amazonas. He uses the plant, known as saratudo, to treat tribal members with symptoms of COVID-19. Hospitals and cemeteries in the city have been overwhelmed with victims of the pandemic.

Moreover, the report cited the “patent deterioration” of the enforcement capacity of FUNAI, the agency charged with defending the boundaries of Brazil’s indigenous lands. The report says that steep budget cuts and reassignment of personnel at FUNAI have heightened prospects for illegal incursions into the reserve by prospectors, fishermen, and animal poachers who could bring the virus with them.

The 33,000-square-mile Javari Valley Indigenous Territory hosts the world’s largest number of indigenous communities living in extreme isolation, sometimes referred to as “uncontacted tribes.” FUNAI has confirmed the presence of nine such groups in the reserve totaling perhaps 1,000 to 1,500 people; there may be as many as nine more groups, according to FUNAI field agents. Though most Korubo have now been contacted by outsiders, officials estimate that there are still 40 to 50 uncontacted members of the tribe deep in the forest.

The Korubo, like other uncontacted and newly contacted groups in the Amazon, are considered already at especially high risk for infectious diseases because they lack immunological defenses to pathogens brought in by outsiders. This makes them all the more susceptible to respiratory illnesses such as COVID-19.

Dispersed in towns and villages along the upper Amazon River, the Kokama people have suffered 55 deaths from the virus since early April. That’s when a family of four was infected by a health service doctor who recently had returned from a conference in southern Brazil and failed to observe self-isolating protocols afterward.

“This discrepancy is exactly the most accurate expression of the institutional racism that leads to authorised genocide,” says Sônia Guajajara, APIB’s executive coordinator. As of June 9, SESAI had recorded 85 indigenous deaths from COVID-19. The National Committee of Indigenous Life and Memory, created to track pandemic victims and tell their stories, puts the number at three times that. “The government wants to hide the real numbers in order to carry out its plan to exterminate the indigenous peoples,” she says.

Poachers and the pandemic—a dual threat

Indigenous leaders say the government of right-wing President Jair Bolsonaro is failing to defend their people from a dual threat: the spread of the coronavirus on the one hand and a surge of land invasions on the other. Deforestation rates in the Brazilian Amazon are up nearly 60 percent over last year, according to Brazil’s National Institute for Space Research, with enforcement efforts crippled by the lockdown and official edicts that have cut back on protections for the environment and indigenous populations.

“The invaders themselves are vectors of contamination,” Guajajara says. In far-flung regions where isolated tribes are present but law enforcement has retreated, intrusions from gold prospectors or timber poachers could result in “total extermination” of the highly vulnerable indigenous groups, she says.

FUNAI denies any failure on its part. “At no time has the institution exempted itself from any legal obligation to protect and promote the rights of indigenous peoples, always striving for zeal and attention in its actions,” the agency said in a written response to questions from National Geographic. The statement also said that FUNAI has been “adopting all the measures that are within its reach in combating the pandemic of the new coronavirus.”

Many indigenous groups say otherwise. An ongoing surge of thousands of illegal gold prospectors has despoiled large swaths of sprawling Yanomami Indigenous Territory, in the northern state of Roraima. Miners have poisoned rivers with the mercury they use to separate gold from the Amazon’s sandy soil. They have also brought malaria, alcohol abuse, sexually transmitted diseases—and now, Yanomami leaders fear, COVID-19. Three Yanomami have died so far from the coronavirus, and tribal leaders say there are at least 55 cases of infection.

“Our biggest concern now is that the miners will spread the disease to the communities,” said Dario Kopenawa, vice president of the Hutukara Yanomami Association, which represents the 26,000 tribal members living in Yanomami Indigenous Territory. “The miners are going to kill the Yanomami by contamination.”

His remarks coincided with a report released last week by researchers from the Universidade Federal de Minas Gerais and the São Paulo-based thinktank Instituto Socioambiental, which found that 40 percent of Yanomami living near the gold strikes are in danger of COVID-19 infection. One prospecting encampment is located within a two-day trek from an uncontacted Yanomami village. Activists fear that a single infection could annihilate that indigenous community.

Hutukara has joined with a consortium of Brazilian and international cultural rights groups to launch a campaign called MinersOutCovidOut. The campaign is demanding the eviction of the estimated 20,000 miners who are illegally prospecting for gold in Yanomami territory.

Anthropologists are particularly concerned about the potentially devastating loss to indigenous communities if their elders—who are the most vulnerable to infection—are swept away by the pandemic. “The elderly are living encyclopedias retaining the worldview of these populations,” says Tiago Moreira dos Santos, an anthropologist with Instituto Socioambiental. “They are the guardians of a culture. We’re talking not only about myths and stories but also about language, memory, and knowledge that are fundamental to the existence of a people.”

At the outset of the pandemic, many indigenous groups moved swiftly to limit the spread of the coronavirus, Sônia Guajajara says. They erected roadblocks and sanitary barriers, and they sewed masks and urged tribal members to remain in their villages, she says: “Every community is adopting its own protection measures.” (Residents inside Brazil's largest apartment complex also took protective measures into their own hands.)

“Indigenous people have been through wave after wave of fatal epidemics,” says Glenn Shepard, an American anthropologist at the Emilio Gueldi Museum, in Belém, a centre for the study of biological and sociocultural diversity in the Amazon. “So they knew exactly what to do—isolate yourself.” Such long-standing self-protection, he says, accounts for the continuing presence in Brazil and neighbouring countries of uncontacted tribal communities, perhaps as many as a hundred such groups throughout the Amazon.

“This is how the isolated indigenous people, the so-called uncontacted peoples, got the way they are,” Shepard says. “It’s because of illness and violent displacement that they sealed themselves off from everybody else. That’s been their strategy since the beginning.”

But the government of Jair Bolsonaro has put out mixed messages on how to respond to the pandemic—inciting citizens to ignore lockdown and social distancing measures while luring indigenous people to cities to receive modest stimulus payments, Guajajara says. Taken together with initiatives and statements that encourage outsiders to usurp indigenous lands and other protected areas, it adds up to a social and environmental disaster in the making.

“This is moment of general alert, because we’re completely cornered,” she says, “by the virus on one side and the genocidal measures of this fascist government on the other.”