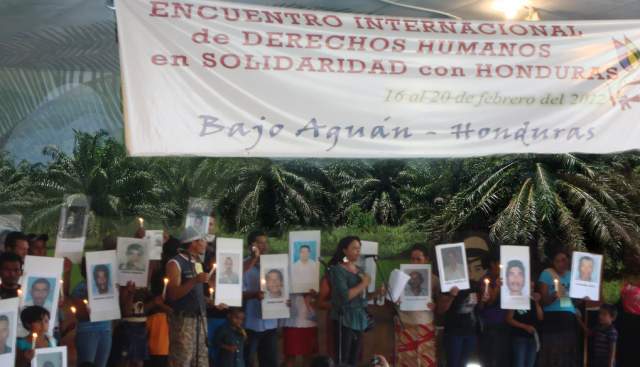 Months before he was killed this past September, Antonio Trejo-Cabrera, reportedly sought protection from Miguel Facussé, the owner of Dinant Corporation, a major Honduran snack food and agricultural company. Trejo had good reason to be afraid – he was a lawyer who represented peasant movements fighting palm oil plantations in the Honduras in the last three years – many of whom were subjected to violence and other human rights abuses.

A recent profile of Facussé in the Los Angeles Times describes the 89-year-old businessman as “a symbol of the old style of patriarchal power” that has “ruthlessly developed the country over the decades from a hot and dusty backwater to an international producer of bananas, cheap clothing and, more recently, biofuels.”

Facussé joined the biofuel rush by planting African palm trees, backed by funds from bilateral and multilateral loan agencies like the World Bank. The palm trees yield a fruit which can be processed to produce biofuels that is in high demand by governments who want industry to reduce their dependence on fossil fuels like coal and petroleum in order to meet international obligations to mitigate global warming under the Climate Change convention.

Dinant quickly became one of the biggest players in this field in the Honduras - it manages 22,000 acres of plantations, exporting half of the produce to other countries.

In 2008, Dinant sought loans, totaling $100 million, in order to develop its production of African palm from a German public development bank, Deutsche Entwicklungsgesellschaft (DEG), the World Bank, the Inter-American Development Bank, and the Central American Bank for Economic Integration. The World Bank released $15 million of its loan to Dinant in November 2009.

Much of the palm oil development in the Honduras is taking place in the Bajo Aguán valley where an escalating conflict is taking place between large land owners and thousands of landless peasants. This conflict dates back to the 1960s and 1970s, the Honduran government developed agrarian reform laws, giving land in the Aguán region to thousands of subsistence farmers.

In 1992 the Law for Land Modernization was passed, undermining farmers’ rights. In the two years following passage of the 1992 law, three large landowners “used a combination of fraud, coercion and violence to consolidate ownership of 73.4 percent of the land transferred under the prior agrarian reform,” says Lauren Carasik, a human rights expert writing for Al Jazeera.

Progress was made - although short lived - in 2009 when President Manuel Zelya agreed to grant some farmers land titles. But in November 2009 the Honduran military removed the democratically elected president in a coup d’etat. (Facussé admits that his plane was used to deport the foreign minister against her will, but says the pilot was acting under military orders) The next two presidents - Roberto Micheletti and Porfirio Lobo - refused to honor Zelaya’s agreement, sparking peaceful occupations of 12,000 acres of disputed land. Aguán farmers continue to demand justice just as violence has intensified.

Post coup Honduras has seen violence and impunity increase across the country. According to the United Nations, Honduras now has the highest homicide rate in the world, with 96.1 murders per 100,000 people. Whilst many of the murders are attributed to gang and drug violence, attacks against civil rights campaigners have also risen. The Honduran Bar Association state that there have been 74 lawyers murdered since 2009 and according to Reporters Without Borders 30 journalists have been killed in Honduras in the past decade, 25 of them since the coup.

Alarmed by ongoing human rights abuses, Rights Action, a U.S. based human rights group, wrote to the World Bank in November 2010. “The World Bank decision to release funds to Dinant sent a clear message to Dinant: that the company and its owners enjoy impunity for their actions, and the World Bank will tolerate violence, illegal land grabbing, and even participation in military coups by corporations and their owners…”

In 2011, DEG, the German development bank, canceled a $20 million loan to Dinant, when FIAN, an international NGO working for food rights, presented them with a report on human rights violations in Bajo Aguán. The report documented “evidence of the involvement of private security forces hired by Dinant and other companies owned by Miguel Facussé in human rights abuses and, in particular, in the murder of peasants in Bajo Aguán.”

A number of human rights organizations say they continue to be extremely concerned by the situation in the Aguán region. In a recent report, Rights Action called on the World Bank to suspend the second loan installment stating that, “the Bank's actions assist in the robbery of land, stolen by violent actors that enjoy Bank funding.”

The World Bank is due to conduct an audit to revaluate the ‘social risks’ associated with the project, but Rights Action noted that “it is unclear when this audit will or has begun, and whether it could lead to a suspension of the second disbursement of the Dinant loan.”

In May 2012, a public hearing on the human rights situation in the peasant communities of Bajo Aguán concluded that the agrarian conflict in the Bajo Aguán is the “most serious situation in terms of violence against peasants in Central America in the last fifteen years.”

Since the coup at least 60 people, mostly farmers as well as some Dinant employees, have been killed in the Aguán conflict, according to the Associated Press.

Dinant representative Roger Pineda told the new agency that the deaths of farmers were a result of infighting among the peasants as they compete for land.

The violence came to international attention when Trejo (who was also a preacher) was shot dead after presiding over a wedding in Tegucigalpa, the national capital, in late September just after he won a court ruling against Dinant. Shocked by the prominent lawyer’s killing, three United Nations Special Rapporteurs Frank LaRue, Christof Heyns, and Margaret Sekaggya, described the killing as “totally unacceptable.”

Facussé has responded to widespread speculation that he was involved in the lawyer’s murder. “I probably had reasons to kill him but I'm not a killer,” he told the Los Angeles Times. ‘‘I deeply lament the death of the lawyer Trejo Cabrera, as I lament the loss of any human life, independent of any differences I might have had with him on the legal plane on the issue of land in Aguán,’ he added in remarks to the Associated Press.

Meanwhile violence in the Aguán continues. In early November, three farmers were gunned down at a bus stop. A week later the body of Jose Cecilio Perez, a member of MARCA who had been kidnapped, was found on a riverbank.

In the Los Angeles Times profile, the writer noted that Facussé kept “files of photos of the various Honduran activists who are most vocal against him.” Stopping him for good “will take some doing” the businessman told her with a smile.