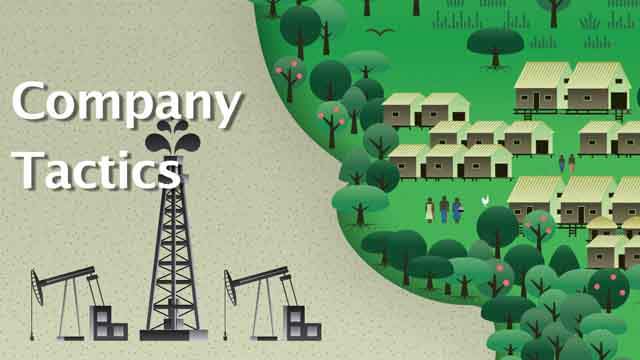 This new video from LifeMosaic describes the tactics that companies use to convince communities to accept and support their projects. It’s the third in LifeMosaic’s series “Territories of Life“.

The video is based on communities’ experiences in Cameroon, Peru, Colombia, Tanzania, Indonesia and Paraguay. In the previous video in the series about “Land Grabs“, we saw how companies are targeting indigenous peoples’ land to extract minerals, fossil fuels and agricultural commodities for global markets.

In this video, we learn about the tactics that companies use, often with the help of governments, to get control of communities’ lands:

Ramon Fogel, a sociologist in Paraguay sums up how companies trick communities into handing over their land:

Companies often promise new jobs for local communities. But the reality is that only a few people get jobs with the company. In the video, Ibu Pia from Penyengat in Indonesia says,

“So many companies come to our village promising work. There are so many people here, but at most 10 to 15 have jobs with the companies. All the others are unemployed.”

In Cameroon, two villagers show the water pump that the company gave them. No water comes out, no matter how long the villagers pump the handle.

In Tanzania, Kijolo Kakeya explains how a company approached her community:

“They came and started to give the village council money but through the district council. It was $1,400 per village. But money only reached the village political leaders who started saying the company investment was not a problem.”

Offering money, houses, or jobs to some members of the community, but not others, is a deliberate tactic to create divisions in the community. LifeMosaic’s narratore explains that, “A united community is often the biggest obstacle to large-scale developments. So dividing the community is one of the most effective tactics the companies use to obtain land.”

Divide and rule is a standard procedure since colonial times. And this is still happening even now, better than any other time.

In addition to tricking communities, companies and governments use violence to get what they want. The video includes statements from villagers in Indonesia and Paraguay who faced violence when corporations arrived in their territories.