Communality as a way of life and resistance 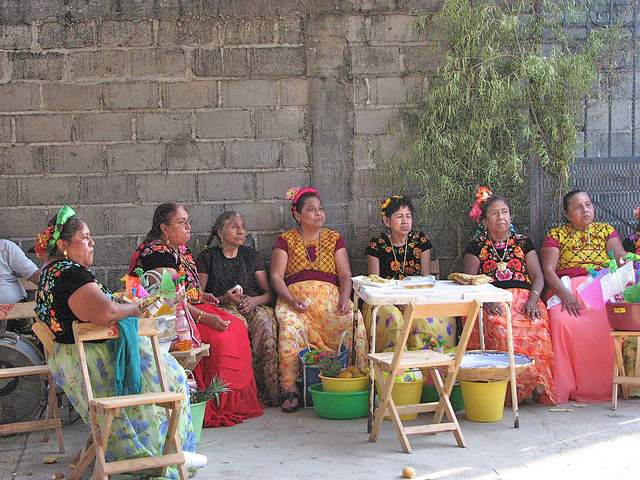 The Xuanas (Shuanas) are the community leaders in this Zapotec city. On the Fiesta de San Sebastian they dress in their special clothes for the community party. (Photo: Avi Dolgin)

In Sierra Juárez, state of Oaxaca, in southern Mexico, people live the experience of communality, explains Zapotec indigenous thinker Jaime Martínez Luna in his 2010 book Eso que llaman Comunalidad (What They Call Communality): “We are communality, the opposite of individuality, we are communal territory, not private property; we are cooperating, not competing; we are polytheism, not monotheism. We are exchange, not business; diversity, not equality, although in the name of equality we are oppressed. We are interdependent, not free. We have authorities, not monarchs. Just as imperial powers have been based on the law and violence to subjugate us, in law and harmony we are based to replicate, to announce what we want and what we wish to be.”

Territory is the physical space where the community stands. The relationship with nature is special, magical, spiritual, for it is known that life depends on that harmony between human beings and nature. It is made up of natural goods and sacred goods; it is the basis of physical and social reproduction; it is the principal site for the proper development of the communal culture.

The social and political organization has been established in such a way that it involves the participation of all members of the community in decision-making. They gather in the General Citizens Assembly — considered to be the space that represents maximum authority within the community — where men and women freely express their opinions to reach consensus to the benefit of the community. The council of elders or select body (group designated by the General Assembly that is made up of citizens who were outstanding in carrying out the duties of various positions within the community) becomes a space of consult and opinion, where experience and knowledge guide and orient the path to follow. The positions of the community are decided and assigned in the General Assembly; this way, communal authorities, commissions, and committees made up of inhabitants of the community are designated. The election of authorities is based on prestige and, consequently, on the work done. Exercising public offices does not entail an economic reward, but brings prestige and trust that increases in accordance with the hierarchy of the position.

The resistance of the indigenous peoples of the Sierra Juárez has allowed for the conservation of values and principles of complementarity and reciprocity within a harmonious environment that have been undermined and destroyed by capitalist practices characterized by the control and depredation of natural resources as well as violence towards the communities of the region. Said resistance, motivated by the history of each community, has led these peoples to have more possibilities to reach and/or maintain their wellbeing, happiness, and that which they call communality (or communal life) which coincides with the idea of Good Living stemming from Andean thought.

Santa Catarina Lachatao, a Zapatec community located in the Sierra Juárez, represents a clear example of the reunion between human beings and nature. In past times, its people decided to exploit its natural resources. Tree logging came to be one of the main economic activities in the region. Today, however, they thread a different path. Juan Santiago Hernández, former municipal president and now the communal representative, explains to Latinamerica Press that the relationship that exists with nature is now a harmonious one. To him, Mother Earth is part of his identity.

“If we have land and we take care of it, we will continue to exist,” he says. “A harmony with the soil, the water, the air is all. Nature is the most important thing for us; it is life.”

These feelings toward nature within communal living are being transmitted to the children. Verónica Hernández Cruz, an assistant to the Ecotourism Committee of the community, points out: “Now we are doing some activities with the children, taking them to the forest because they must feel it, live it in such a way that they begin realizing the consequences of not taking care of and respecting nature. We teach them what flora and fauna are. Also by doing workshops we want to transmit to them the desire to continue preserving what nature gives us.”

While it brought important economic benefits for a short period, logging has left a great irreversible void in the natural landscape of the community. Through rescuing its own history, Santa Catarina Lachatao has been constructing and working with alternatives that lead to the wellbeing and happiness of the community while always maintaining a balance with nature. Activities such as agriculture — growing corn, beans, chickpeas, wheat, fava bean, and pumpkin — and ecotourism are generating income, while not clouding the concepts of conservation and good management of natural resources.

Ecotourism offers visitors a true coexistence with nature. Hernández Cruz comments that the activities carried out for the project to function satisfactorily range from residual water treatment to waste recycling and capturing rainwater. Likewise, materials such as adobe and tiles are utilized to build cabins to ensure minimal impact on nature.

For his part, Santiago Hernández remembers: “Grandparents talked to us about the harmony with nature; they told us that before there was a lot of water, before one went to the forest and heard birds and other animals. Now we go and the forest is dryer, we no longer find birds or the animals that they used to see. Because of this we know that, yes, there must be respect for nature. We also think of future generations, for they would tell us that we had the opportunity to conserve the forest and to put a halt to its exploitation. And perhaps they will think that it is for money that we continue to exploit and kill nature. Instead, we want them to say that we put a stop to it, that we tried to initiate that fight.”

To understand communal life, elements such as trust, complementarity, reciprocity, brotherhood, and party must be taken into consideration. For the Zapotec communities of this region, teamwork and supporting each other in a communal activity named tequio brings them wellbeing. Tequio is an organized way to work towards a collective benefit, where all the citizens volunteer their time and labor to build and maintain community facilities, such as schools, water supply systems or road cleaning. This way of living is not new; it is an intrinsic part of how the indigenous peoples view the world, something inherited from their ancestors. However, the influence of the western world and the constant attacks from privatization, in addition to the penetration of communication media that is based on market principles, have distorted this world view, which is why communities such as Santa Catarina Lachatao seek to recover their tainted values and rescue the harmonious equilibrium between human beings and nature.

Paraphrasing thinker Martínez Luna, communality is the ideology, thinking, and action that has allowed communities to face and resolve challenges and problems that history has brought them. For him, communality is “living knowledge that allows everyone to coexist and collaborate collectively for the service of all.”

The importance of understanding and preserving this lifestyle, says Martínez Luna, “lies in the fact that in the future, the survival and transcendence of the ancient peoples, with respect to the actions of the world that surrounds them, will rest on maintaining the resistance-adaptation of this communal way of being (…) for it is known that the fundamental values of western society are based on individualism.