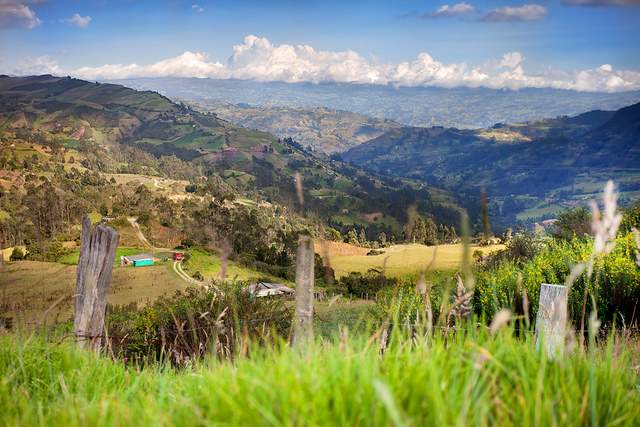 As much as 20 million hectares of Colombia’s agricultural land is inefficiently used and could accommodate new plantations of oil palm. (Photo: Christopher Schoenbohm)

Palm oil giant Colombia may be in a position to better balance sustainability and output than Indonesia, Malaysia and other big league players, but success depends on political will and robust monitoring of environmental impacts, according to a new paper. It’s important, too, that the rights of local people aren’t trampled on in the process.

The South American nation, the world’s fifth largest and fastest growing producer, is seeking to increase output sixfold by the end of the decade, John Garcia-Ulloa and other authors wrote in “Lowering environmental costs of oil-palm expansion in Colombia”.

Instead of clearing natural forests, it may be able to convert degraded pastures into palm oil plantations, opening up access to the EU and other markets where consumers are demanding sustainably produced oil for cooking, cosmetics and “green energy,” they said.

Colombia, a country with a long history of violence tied in part to the illicit planting and harvesting of coca for the drug trade, started cultivating oil palm in relatively small areas around the 1970s, primarily to supply the domestic food market. Rapid expansion began in the 2000s, thanks in large part to tax breaks and other incentives offered by the government to increase palm oil production for export, as well as meeting blending targets for biodiesel production.

As of 2010, more than 400,000 hectares of land were either in production or under development, according to Sistema de Información Estadística del Sector Palmero, or SISPA.

This unprecedented growth did not come without controversy, however.

Non-governmental organizations have claimed that alongside more legitimate developers, violent, drug-running quasi-state security forces have eked out handholds in the palm oil sector, while the country’s judiciary have taken action against palm producers for contributing to the internal displacement of more people than in any other country besides Sudan.

Still, studies by the Center for International Forestry Research indicate palm oil may play a less direct role in population displacement than has been claimed.

And there’s scope, potentially, for Colombia to expand its plantations relatively cleanly.

Authors of the new paper, which was published in the journal Conservation Letters, generated a comprehensive environmental and socioeconomic spatial database for Colombia and used it to model ﬁve scenarios for palm oil expansion: production-oriented, maximizing productivity; agroindustrial development, prioritizing food security; ecosystem protection, prioritizing the conversion of human-modiﬁed and least-proﬁtable land; carbon conservation, which prioritizes the conservation of carbon-rich vegetation; and a hybrid scenario that combines each of these priorities.

”[Colombia's inefficient agricultural areas] could accommodate new plantations of oil palm, avoiding thus the expansion on other natural ecosystems such as forests or savannahs.”

“Colombia may have an advantage over the Indonesian case when it comes to lowering impacts from the expansion of oil-palm,” according to Garcia-Ulloa of ETH Zurich, Switzerland. A vast swathe of Colombia’s agricultural land – as much as 20 million hectares – comprises pastures used for ranching, which are “very inefficient due to the use of rudimental production systems,” he says.

“These areas could accommodate new plantations of oil palm, thus avoiding the expansion on other natural ecosystems such as forests or savannahs.”

Indonesia’s degraded lands in contrast are far more heterogeneous, can be difficult to access, and include peat soils and degraded forests which still have considerable biodiversity value, thus presenting great environmental risk if converted to oil palm, he says.

“Our hybrid scenario, however efficient in accommodating oil palm while minimizing impacts on agriculture and the environment, is but a theoretical optimum and may fail to materialize without political commitment,” Garcia-Ulloa and his co-authors wrote.

The public order situation is Colombia’s “main challenge,” he said.

As well, “there is a generalized perception…that the agricultural frontier should be expanded, without realizing that the vast majority of the already transformed areas are dominated by inefficient agricultural systems such as extensive ranching.”

Still, oil palm is one of the country’s best-organized agricultural sectors, and there are multiple organizations of all political shades that are able to spark public debate, although they tend to focus on the country’s social problems, and discussion about environmental issues mostly takes place in urban centres far from plantations.

Garcia-Ulloa says the scientists’ main goal is to “understand and explore the relative impacts and tradeoffs of emphasizing different societal priorities in future pathways of oil palm expansion in Colombia.”

“We believe that this exploratory approach is more useful to stakeholders, because it helps them to identify patterns and trends of the impacts of different development pathways,” he says, with this model-based analysis seeking to contribute to “a more informed discourse on future land use options.”

This work is part of the CGIAR Research Program on Forests, Trees and Agroforestry and was supported by the Swiss National Science Foundation, and the ETH North South Centre.