16th May 2014 | Categories: Forests and Climate Change,  Mining and Oil 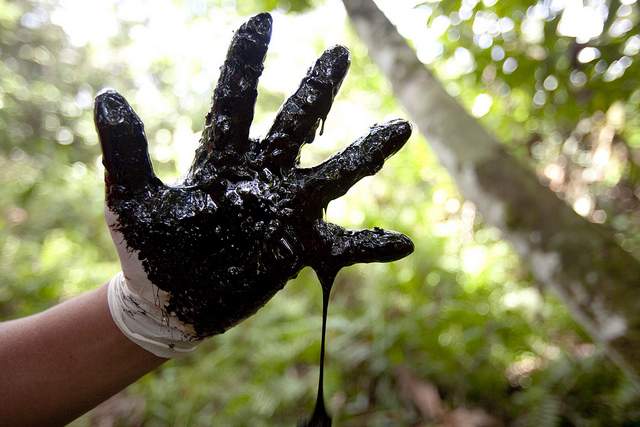 A hand covered in crude from one of the hundreds of open toxic pits Chevron (formerly Texaco) abandoned in the Ecuadorean Amazon rainforest near Lago Agrio. (Photo: Caroline Bennett / Rainforest Action Network)

On May 7, Patton Boggs, a prominent Washington law and lobbying firm, withdrew from an effort to enforce a $9.5 billion Ecuadorean court order against U.S. oil giant Chevron. Patton Boggs represented 48 Amazon residents in a long-running suit for health and environmental damages resulting from the dumping of 18 billion gallons of toxic wastewater in Ecuador’s northern Lago Agrio region.

As part of the settlement, in exchange for Chevron’s dropping a fraud claim against the firm, Patton Boggs agreed to pay the oil company $15 million, to provide documents and assign 5 percent of the profits to Chevron if the plaintiffs prevailed and to express regret for involvement in the case. The Ecuadorean plaintiffs, who first heard about the firm’s withdrawal in the press, condemned the “betrayal,” vowing to explore legal options to nullify all or parts of the settlement.

The firm’s sudden concession has been trumpeted as another legal and public-relations victory for Chevron. While the energy multinational may have indeed won a high-profile legal scuffle, the Amazonian farmers’ battle for justice is far from over. Besides, the withdrawal appears to be more about Patton Boggs’ survival than any commentary on the validity of the suit it had so vigorously and effectively promoted.

Read this article in full on Al Jazeera's website